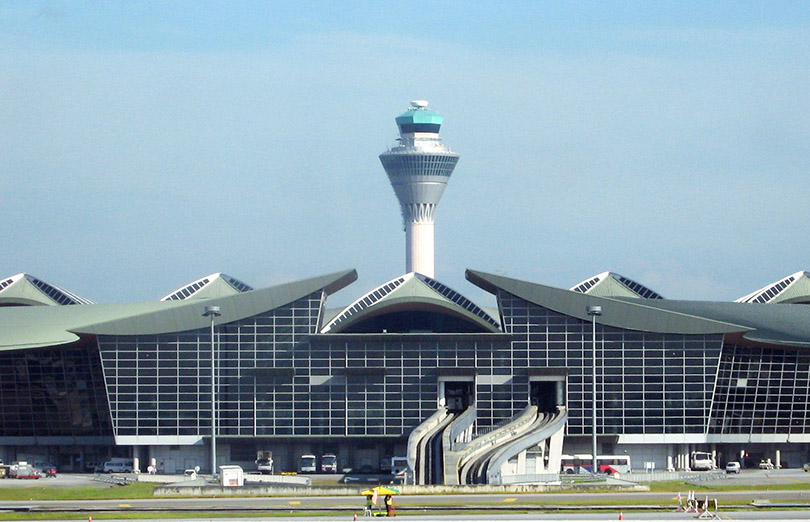 Before you fly, check the luggage policy for your airline and confirm your flight 24 hours in advance. Make a copy of your passport/flight itinerary/hotel reservations and leave it with someone at home. Pack headache and other medicines in your hand luggage.

Travelers can choose limousine services, which operate through a coupon system. Tickets can be purchased at the Airport Limo counter situated in the Arrival Hall. The list of limousine models includes a Mercedes E220 and Jaguar S-Type. Taxis are available at levels 1 and 3 of the Main Terminal Building. An RM2 coupon purchase is required prior to boarding these taxis. A 50% surcharge is added between Midnight and 6 am.

KLIA Express train service is the most convenient way to travel to and from KLIA. The journey takes only 30 minutes from KLIA to KL Sentral Station (Downtown), operating at 15-minute intervals during peak hours and 20 minutes during off-peak hours. Catch this train at Level 1. A one-way trip will cost RM35, double that for a round-trip ticket. KL Transit train service also connects KLIA with KL Sentral for RM35 but makes 4 stops along the way. the slight disadvantage is more people getting on and off with luggage and 35 minutes to KL Sentral. The four stops are in Bandar Tasik Selatan, Putrajaya, Cyberjaya and Salak Tinggi. 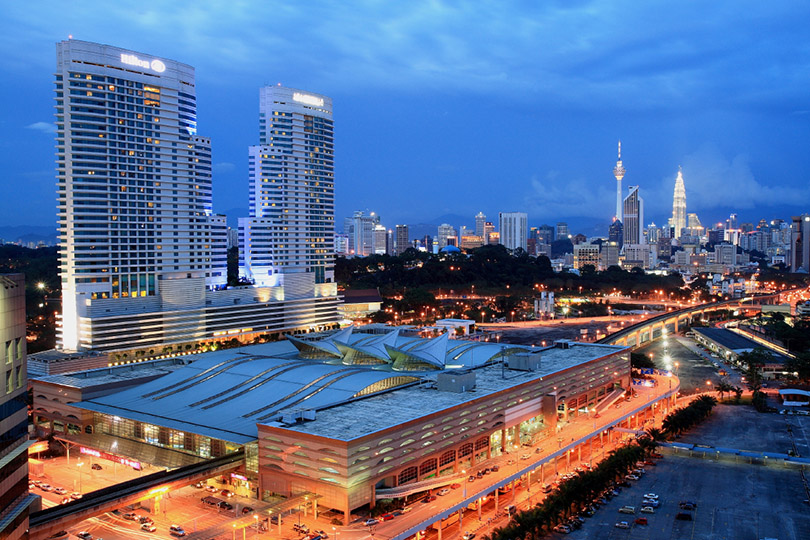 Kuala Lumpur has intercity passenger rail service by Keretapi Tanah Melayu (KTM) Intercity rail network. Part of the Trans-Asian Railway, the line links Singapore to Kuala Lumpur, Ipoh, and Butterworth and connects with Thai Railways at Padang Besar, and ends at Hat Yai in southern Thailand and north to Bangkok.

The Kuala Lumpur-Singapore High Speed Rail project started in 2017 and is expected to open in 2026. The 220-mile line is being designed to reach 186 mph (300 kph) to cut travel time between the two global cities from 7 hours by conventional rail, down to 99 minutes. Placing passengers n the heart of each city will dramatically cut flights between the two cities.

Opened in 1996 and having 30% less mileage, Rapid KL has already grown ridership higher than San Francisco’s BART metro system. That makes each station busier. Once you arrive in KL Sentral Station, it is convenient to hop on a KTM Komuter, LRT, or Monorail to reach many popular destinations. They operate from 6 am to Midnight, with trains arriving every 3-15 minutes. As you might surmise, trains are crowded during commute hours (07:00-09:00 and 17:00-19:00). 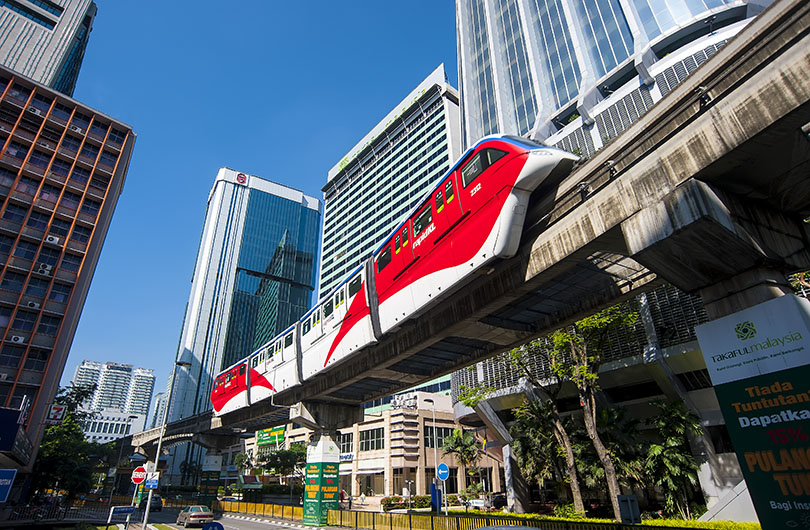 KL Monorail runs 8.6km with two parallel elevated tracks and serves 11 stations. It connects KL Sentral with major hotels and shopping malls in the city. The starting point of KL Monorail is situated about 100 meters away from the KL Sentral Station

Like American cities, Rapid KL employs stored value tickets issued on magnetic stripe cards. Tickets can be purchased either from ticket vending machines or at station counters found at all stations. Card reader turnstiles are at every station. Rail fares range from RM 0.70 to RM 5.10, depending on the distance.

Tourists usually purchase daily or weekly Rapid KL cards. Even if you’re a car-only person in America, try the Heavy Rail, Light Rail, and Monorail for a day to experience this slice of Kuala Lumpur life. Kuala Lumpur is safer than similar American metro areas with a 7 million population. A single person can go anywhere on the system. But at night, there are a few dicey stations for women, so ask your hotel concierge and plan ahead.

If traveling alone, avoid reading paper maps or tourist books on Rapid KL. Instead, study the Rapid KL map on your computer/tablet in your hotel room or at a cafe. If you have questions about the Rapid KL, ask the concierge. Stash away paper maps. Then after catching the KL Rapid, a brief glance at station maps and on trains will not draw undue attention.