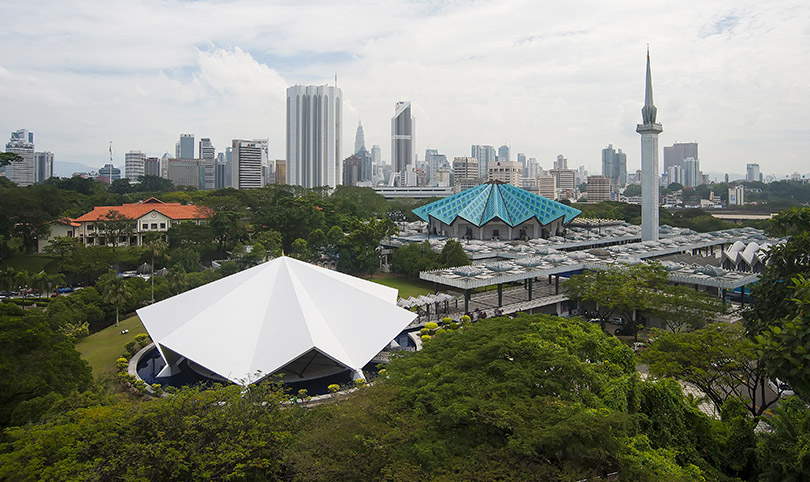 This museum showcases the beauty of Islamic arts in Malaysia and around the world. Highlights include Islamic architecture and replicas of famous buildings such as the Taj Mahal in India, Masjid Al- Haram, and the Amir Timur Mausoleum in Uzbekistan.; credit Malaysia Tourism

When you weigh choices of where to travel to Southeast Asia, here are 7 Reasons to Visit Kuala Lumpur:

Prices are comparable to the States, but the exchange rate favors the U.S. Dollar. The ratio of the Malaysian Ringgit (RM) to the U.S. dollar is about four to one. The 75 RM taxi from the airport sets you back less than 20 bucks; the same trip on the high-speed KLIA Ekspres train is just 55 RM or $13.75.

That steaming plate of shrimp and noodles that’ll feed you for two meals costs 8 RM or $2. Kuala Lumpur food was so embarrassingly inexpensive that I got a little thrill every time I handed over the pastel-colored Malaysian bills.

But seek out food courts called “hawker centers” for the best tasting, least expensive meals. You’ll find hawkers in most shopping malls (just ask “Where’s the food court?”), and you can’t walk two blocks on any major street without running into a shopping mall.

The open-air hawkers are the most authentic and can be found throughout the city. Sungei Wang Food Court in Bukit Bintang has earned rave reviews.

Determined to eat like locals, we booked a food tour called “Off the Eaten Track,” offered by Food Tour Malaysia. In his own suburban neighborhood, gastronomic expert Ken Chuah introduced us to a host of his country’s favorites. Hugely popular is Nasi Lambek (coconut rice, a spicy chili sauce called Sambal, half a boiled egg, cucumber slices, anchovies, and peanuts, all wrapped in a banana leaf). 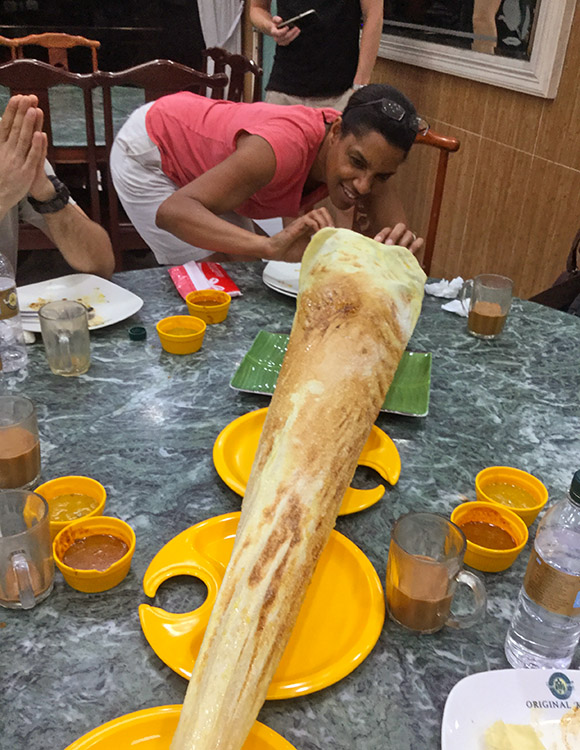 We enjoyed some dishes enough to order them wherever we went for the next two weeks. I loved Char Kway Teow, a fiery flat-noodle, stir-fry dish in a sauce laced with sesame oil, and Roti Tissue, a four-feet long (yes, four feet!), cone-shaped dessert sprinkled with sugar and cinnamon.

3. The Batu Caves
Carved from a limestone hill, the three caves stretch 328 feet high and shelter six holy shrines of the Hindu religion. A

A giant golden statue of a Hindu goddess greets you upon arrival. It makes for a great selfie backdrop, but be mindful that you are on sacred ground. 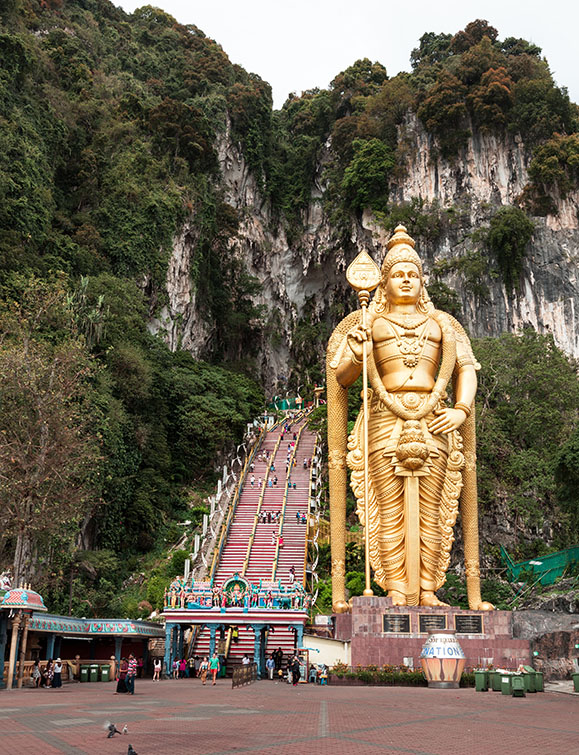 Take a pass on the hotel gym that day and climb 272 colorful steps to reach the largest of the caverns – the Temple Cave. It houses three shrines. Despite the concessioners selling key rings and sodas, the caves are an important homage to the Hindu religion. Not visiting the Batu Caves in Kuala Lumpur is like skipping the Eiffel Tour in Paris.

Take lots of photos of the small, gray Macaque monkeys. They scamper around tourists’ feet, some with babies clinging upside down to their tummies.

4. The Other Cultural Attractions

Kuala Lumpur is perfect for strolling through museums, marveling at the jaw-dropping architecture, and getting a glimpse of other religions by visiting where they worship. High on the list of places to check out:

The Islamic Arts Museum, the Thean Hou Temple, the Jamek Mosque, the Sultan Abdul Samad Building, Little India, Central Market, the National Zoo of Malaysia, the Kuala Lumpur Bird Park, and the Petronas Towers, among others.

The iconic towers are 88-story twin buildings connected by a skybridge that you can walk across for $25 U.S. Dollars. Skip that and have a $7 drink at the SkyBar in the nearby Trader’s Hotel. You get the same view as from the towers AND a view of the towers themselves.

To get to all of those places, use a Kuala Lumpur’s Touch ‘n Go transit pass, which doubles as a pre-paid credit card at participating stores. Load 20 bucks on the card and you can flash it to ride the KL Monorail, buy Nasi Lambek at a hawker, or grab some toothpaste at the convenience store. No need to fumble with cash.

For more information about where to buy a card and which retailers and transit agencies take it, check the “Touch ‘n Go” website.

When a city hosts one of the largest jazz festivals in Southeast Asia, you know its jazz scene is on point. The Kuala Lumpur International Jazz Festival was held in May 2016 and featured a slew of international performers, including Grammy Award-winning Lee Ritenour.

During our visit, we were able to snag a table at No Black Tie, a cozy den of live music in the hip Bukit Bintang neighborhood. Here’s my review of the venue and performance of Fatima and the Lights. Other jazz clubs in town include Alexis Bistro, Mezze and Bobo KL at 65-1 Jalan Bangkung, Bangsar.

And keep an eye out for musicians on the street. While wandering near the Islamic Arts Museum, we came across a Malaysian band jamming Tina Turner’s “Proud Mary” in a parking lot next to a food stand. 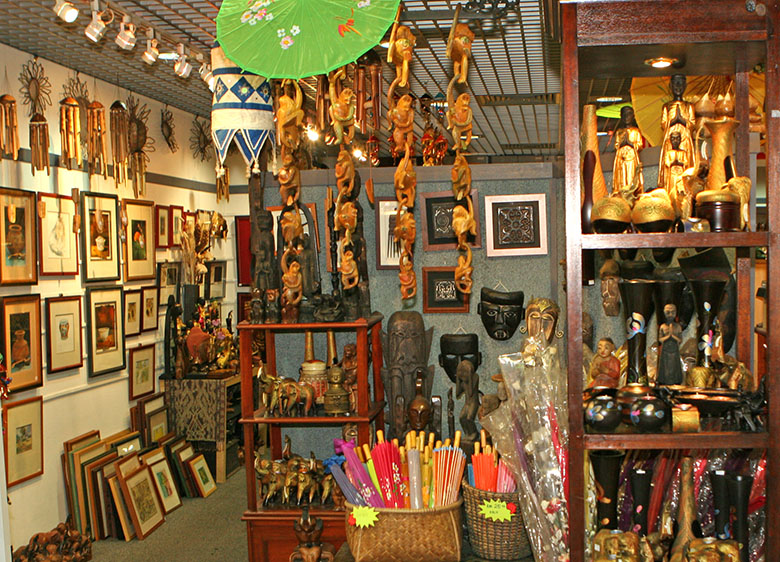 Kuala Lumpur is the hub of AirAsia, a Malaysian airline that covers much of the region for dirt cheap fares. With three months’ notice, you can buy a roundtrip ticket from Kuala Lumpur to Singapore for $34 U.S. dollars. Fork over $58 to fly to and from Bangkok. For only $52, jet to and from Kuching, the capital of Malaysia’s Sarawek state, located on the enchanted island of Borneo.

Since you’re in that part of the world, you might as well explore.

I knew Kuala Lumpur was special on my first day when I saw a huge animated billboard with the words “Feeling angry?” dancing across the screen. It then read, “Too bad. But we can help. Let’s count down from 10.” Ten emoji faces flashed, one after the other, from an angry “10” to a grinning “1.” “There. Don’t you feel better?” the billboard added. “Have a great day!” Roadside zen therapy.

What a cool concept from an even cooler city.