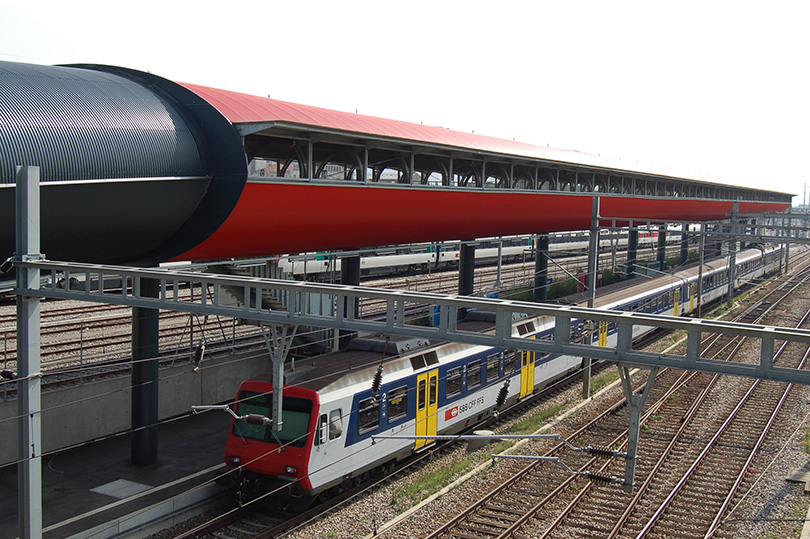 Geneva Cointrin International Airport (GVA) is quite busy with long distance flights. The city is served by the Geneva Airport. It is connected by Geneva Airport railway station (French: Gare de Genève-Aéroport) to both the Swiss Federal Railways network and the French SNCF network, including links to Paris, Lyon, Marseille and Montpellier by TGV. Geneva is connected to the motorway systems of both Switzerland (A1 motorway) and France.

Pick up a free bus or train ticket from the machine in the baggage claims area on the GVA arrival level. The ticket, offered by Geneva International Airport, allows free travel on the public transportation system in Geneva for a period of 80 minutes. That is more than enough time to reach your destination since the train ride from the airport to Carnavin Train Station in the heart of Geneva only takes about 6 minutes. The ride costs less than 10 Swiss Francs.

Other public transport by bus, trolleybus, or tram is provided by Transports Publics Genevois. In addition to extensive coverage of the city center, the network extends to most of the municipalities of the Canton, with a few lines reaching into France.

Public transport by boat is provided by the Mouettes Genevoises, which link the two banks of the lake within the city, and by the Compagnie Générale de Navigation sur le lac Léman which serves more distant destinations such as Nyon, Yvoire, Thonon, Évian, Lausanne, and Montreux using both modern diesel vessels and vintage paddle steamers.

Several train stations are a travel hub for millions of visitors coming in and out of Geneva every year. Trains operated by Swiss Federal Railways include regional train services that are being developed towards Coppet and Bellegarde. Genève-Sécheron and Lancy-Pont-Rouge. Cornavin line is part of the Léman Express regional rail network. Take the TGV Lyria train from Gare de Lyon in Paris.

Taxis in Geneva can be difficult to find. It’s wise to book them in advance in advance in the early morning or evening. Or you can book Uber rides.

Central Railway Station for Geneva, Cornavin is conveniently located in the wider city center. Everything is close to here – Paquis, des Grottes area, plenty of hotels all around. Lake and Rhone river are one street away, behind which are the main shopping streets and the historic old town.

The International Area can be reached by bus in 5 minutes. Gare Cornavin connects Geneva city with the Swiss Railway Network (CFF or SBB) and thus with the rest of Switzerland (Montreux, Basel, Bern); as well as with France on the west (Dijon, Lyon, Paris, Nice). There is a direct airport train link connecting Gare Cornavin with Geneva Airport by 1-stop 6-minute train.

Gare Cornavin is a hub of public transport in Geneva. Many trams and buses stop here, making it easy to start your journey to any corner of the city. There are shops, cafes, coffeehouses, a flower shop, and a transport tickets store.

Its located at GVA Airport, providing arrivals to Geneva Airport a quick connection to the city. Every daytime hour finds several trains going between the Airport and Cornavin Central Station. The journey takes only 6 minutes.

If you want to reach southern Italy or eastern France, start your journey from Chêne-Bourg Railway Station via Gare de Annemasse. Preferred tourist destinations from here are Annecy, Evian, Chamonix, Grenoble and Chambery.

Secheron Railway Station is a much less frequently used train station located north of Gare Cornavin in Geneva’s international district. Most of the trains between Nyon and Geneva also stop here. Secheron is long years under the construction, not yet fully utilized. Its main advantage to Gare Cornavin is its immediate proximity to the whole Geneva International District. 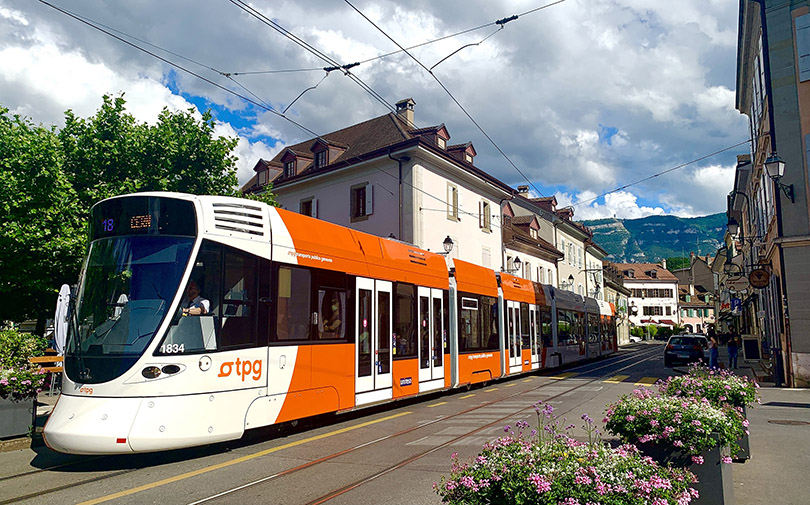 Geneva Public Transport network is named UNIRESO. It is an interconnected system of trams, buses (TPG), mouettes (yello transport boats) and trains (CFF) in the city of Geneva. The whole system uses the same tickets. Get tickets here. Geneva has an extensive Tram System for a metro area of its modest size.

The single UNIRESO ticket is valid for bus, tram, lake boat, and local train (including Cornavin-Airport train) falling within the given Unireso zone. The ticket is valid for 60 minutes and is transferable. The alternative is 3 stops ticket. Tickets are bought at the ticket machines, located at every bus or tram stop in the city, and inside the buses going outside of the city.