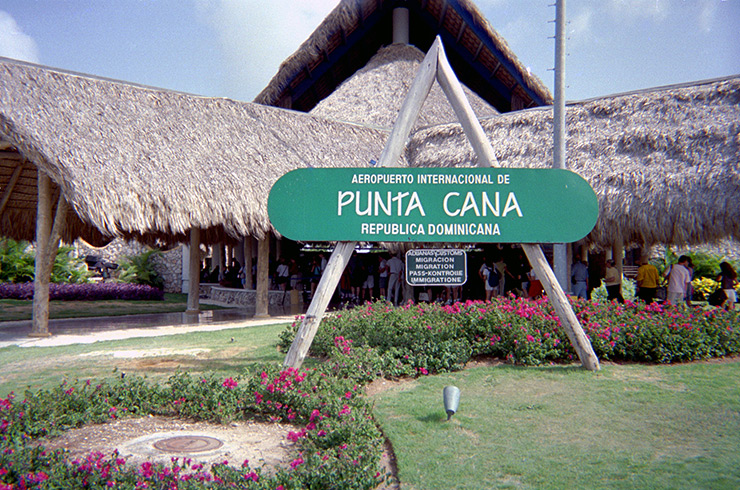 Las Américas International Airport (SDQ) is located in Punta Caucedo near Santo Domingo, Dominican Republic. Las Américas usually receives a wide variety of long-, mid- and short-haul aircraft. It is the second-busiest in the country, after Punta Cana International Airport, and one of the largest in the Caribbean, handling over 3.5 million passengers. Most American traffic comes from NYC JFK, Miami, Fort Lauderdale, San Juan, Newark, Atlanta, Boston and Orlando airports.

Las Américas has five gates on the main satellite concourse (A), A2 through A6. Other gate facilities are for flights departing from a parking in the taxiway. Concourse B has four gates (B1 through B4) and remote stand (P8). Terminal B now features a co-branded Copa Club operated jointly by United Airlines and Copa Airlines, and a Private Lounge exclusive to members and business people. The airport was modernized, and two more terminals were added, including 20 more gates. The new expressway crosses a new suspension bridge which spans the Ozama River, connecting traffic into the city’s Elevated Freeway and Tunnel system.

Daily flights in and out of Las Américas range between 68 and 84 flights. JetBlue, Aeromexico, Air France, American, Avian, Condor, Delta, Spirit and United operate at Las Américas. Terminal A (South Terminal has several services and facilities:

Several companies provide shared van service to/from the airport as well. This is a economical option to travel from Santo Domingo Airport to the city centre or to any other destination in the area. Driving a rental car can be tricky — traffic in many parts of the country is very fast paced. Vacation rates are less during the fall months. You’ll find the following Car Rental counters at Santo Domingo Airport (located at the Terminal North):