Douglas Charles Airport
Douglas-Charles International Airport (DOM) is the dominant airport on Dominica where most visitors arrive. Douglas-Charles, located one hour from the city, features a longer runway and updated terminal. Canefield Airport is 15 minutes from the capital city of Roseau and has a shorter runway for smaller planes.

Leeward Island Air Transport (LIAT) offers direct connections from ANU and BGI, as well as other connecting flights across their 22-island network into Douglas-Charles Airport. LIAT has partnerships with JetBlue and British Airways, allowing travellers to book Dominica directly through these carriers.

Taxis
Taxis are available at the airports and in Roseau. The fare from Douglas Charles Airport to Canfield / Roseau/ Newtown Portsmouth / Picard is US$26. From Douglas Charles Airport to the Carib Territory / Concorde / Atkinson / Calibishie is US$15; to Castle Comfort / Loubiere/ Wallhouse is US$28 and to Salisbury / Batalie/ Coulibistrie/ Colihaut is US$40. From Canefield to Roseau EC$25. Recommended Taxi Services are

Public Bus
The public-facing bus system consists primarily of private minibus operators. Bus stops can be found at designated points throughout the city depending on your destination. The bus fares are standardized and ranges from EC$1.50 to EC$10.25 according route length. Bus rotation is frequent throughout the day, but unsuitable for night travel.

Public buses run on exact fare system and unable to give change. Don’t leave your hotel without extra cash in small denominations. There are also privately operated Minibuses that are yellow with a blue stripe. They operate mainly on the west and south coastline. The most popular routes are Bridgetown–Speightstown and Bridgetown–Sam Lord’s Castle. They charge about $2.50 and do provide change.

Car Rental
Before you get on the road, obtain a Dominica driver’s license which cost US$12. You must be between 25 and 65 years old, with two years’ driving experience to qualify for a driver’s permit. Drive on the left side of the road, most of which are well maintained. List of Recommended Car Rental Services: 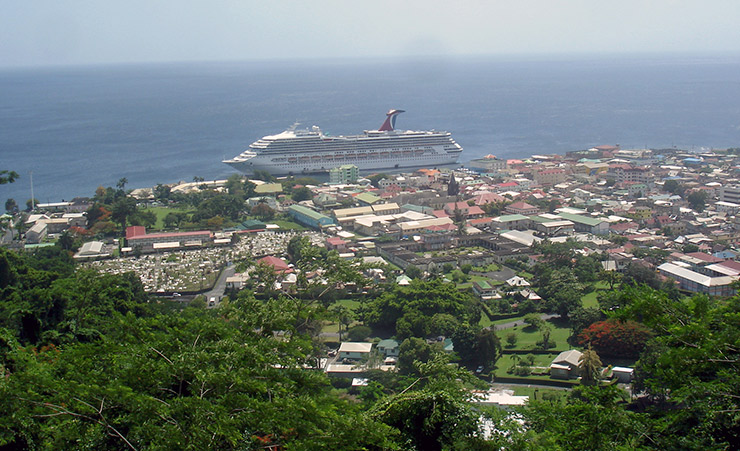 Cruiseport
Every year, hundreds of thousands of visitors arrive on the island from cruise ships berthed at the Roseau Cruise Ship Berth, Woodbridge Bay, and Cabrits Cruise Ship Berth. Captains of yachts and sailboats can also anchor their private yacht at any of the island’s official ports, but they should check in with customs and immigration on arrival regarding clearing processes.