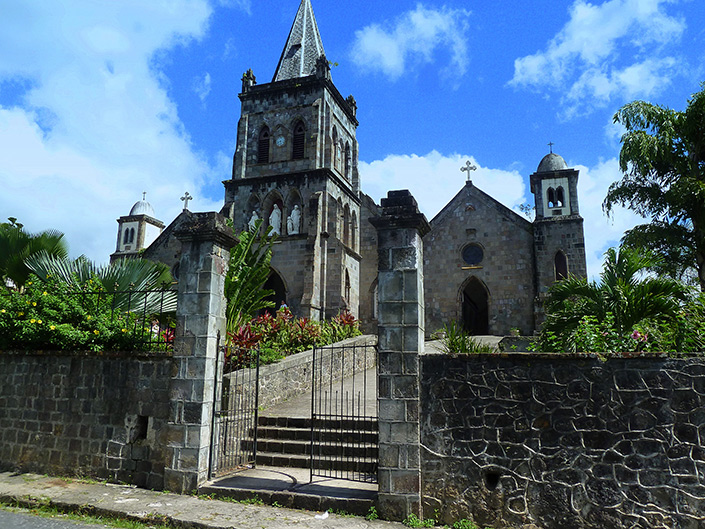 This island was first inhabited by an ancient Native Indian tribe called the Ortoroid. After the Ortoroids vanished, the Arawaks came between 800-1000 AD. The warrior and cannibalistic Caribs arrived in the 1300s and wiped out the Arawaks to seize control of the island. The Caribs called the island Waitikubuli, which means “tall is her body.”

Christopher Columbus named the island after the day of the week on which he spotted it – Sunday (“Doménica” in Italian), which fell on 3 November 1493. He claimed the island for the Spanish Crown who quickly sought to colonize Dominica. That of course, initiated war with the Caribs who retained control of their island.

With both the British and French next fighting for the island in the 1600s the Caribs were ultimately defeated by the Europeans’ gunpowder assaults that drove them into the hills.

By 1635, France claimed Dominica and its missionaries became the first European inhabitants of the island. Carib incursions continued though, and in 1660, the French and British signed a neutrality treaty in which both Dominica and St. Vincent should be abandoned and left for possession by the Caribs. Dominica was officially neutral for the next century, but the attraction of its resources remained. Rival expeditions of British and French foresters arrived by the 1700s. Disease and gunpowder eventually killed the Caribs or sent them into slavery.

Largely due to Dominica’s location between French-controlled Martinique and Guadeloupe, France became the predominant settlement. In 1761, a British expedition against Dominica conquered the island along with several other Caribbean islands. As part of the 1763 Treaty of Paris that ended the Seven Years’ War in the whole of Europe, the island became a British possession. In 1778, during the American Revolutinary War, the French mounted a successful re-invasion of the island with the cooperation of the French population. The 1783 Treaty of Paris, which ended the American Revolutinary War, returned the island to Britain. French invasions in 1795 and 1805 ended in failure.

In 1831, reflecting a liberalization of official British racial attitudes, three Blacks were elected to the legislature. Following the British abolition of slavery in 1834, Dominica became the only British colony to have a Black-controlled legislature in that century. Most Black legislators were small holders or merchants rather than wealthy English planters. Reacting to a perceived threat, the planters lobbied for more direct British rule.

In 1865, the colonial office replaced the elective assembly with one composed of one-half elected members and one-half appointed. Thus, the elected legislators were often outmaneuvered by planters allied with “inside” colonial administrators. For example by 1871, those inside administrators maneuvered Dominica to become part of the British-dominated Leeward Island Federation that favored colonial planters and eroded the power of the Black majority population. The British Crown Colony government was re-established in 1896.

In 1918 following World War I, an upsurge of political consciousness throughout the Caribbean led to the formation of a representative government. Public frustration with the lack of a voice in the governing of Dominica, led a local group to win one-third of the popularly elected seats of the legislative assembly in 1924 and one-half in 1936. Shortly thereafter, Dominica was transferred from the Leeward Island Administration to the Windwards until 1958, when it joined the short-lived West Indies Federation.

In 1961, a Dominica Labor Party government led by Edward Oliver LeBlanc was elected. After the federation dissolved, Dominica became an associated state of the United Kingdom on 27 February 1967 and formally took responsibility for its internal affairs. LeBlanc retired in 1974 and was replaced by Patrick John who became the islands’ first Prime Minister.

The island escaped colonism on 3 November 1978, Independence Day. Its embryonic independence era brought increased challenges, none the least was the complication of its political struggles. By the mid-1980s though, Dominica had settled down as a stable and peaceful country. The success of the banana trade, which was the island’s major export, brought economic buoyancy to the island. Starting in 1992 however, Dominica saw sharp declines in banana export earnings with the loss of its preferential access on the UK market. Today the island is heavily reliant on tourism like its neighbors.