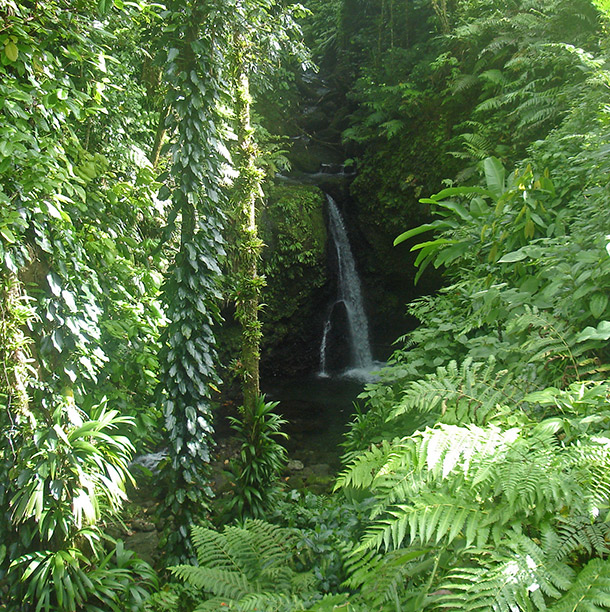 The lush foliage of Jacko Falls in Dominica; (c) Soul Of America

Dominica is in the northernmost of the Caribbean Windward Islands, though it is sometimes considered the southernmost of the Leeward Islands. Known as “The Nature Island of the Caribbean” due to its lush scenery and varied flora and fauna, Dominica is largely covered by rainforest and is home to the world’s second-largest hot spring, Boiling Lake. Due to its volcanic nature and few beaches, it developed tourism more slowly that its neighboring islands.

Its volcanic peaks are cones of lava craters, the largest of these being Morne aux Diables, Morne Diablotins, Morne Trois Pitons and Morne Anglais.

Morne Trois Pitons National Park is a UNESCO as a World Heritage Site. The park is like stepping back in time. Lush, green primordial rainforests slope up to magnificent peaks. Rivers rush past giant ferns. It will awake all your senses with natural wonders, Emerald Pool, Middleham Falls, Titou Gorge and Boiling Lake. Other attractions within the park include the Valley of Desolation, the Boiling Lake, Titou Gorge, Freshwater Lake, Boeri Lake, Emerald Pool, Middleham Falls, Morne Anglaise, Morne Watt, and Morne Micotrin. The Boiling Lake feeds into the Victoria Falls and White River in Delices on the southeast coast of the island. The Emerald Pool is fed by the Middleham Falls. Pirates of the Caribbean: Dead Man’s Chest “Cage of Bones” drop scene was filmed at Titou Gorge.

The Calibishie area in the country’s northeast has sandy beaches. The island has several protected areas, including Cabrits National Park, as well as 365 rivers.

The Sisserou parrot is Dominica’s national bird and home to its mountain forests. A related species, the Red-necked parrot is also common. Both birds are rare and protected.