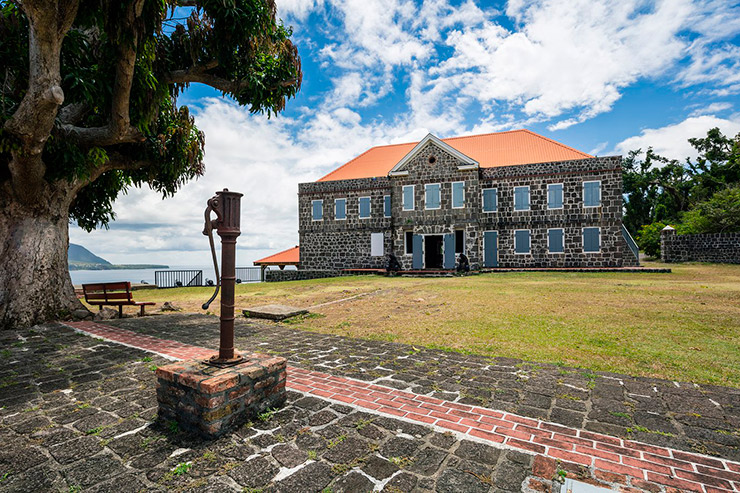 Dominica Attractions are dominated by natural beauty and yet, there are places to reflect on man’s contribution to this wonderful little island. Make your own introductions.

Boiling Lake
The second largest of its kind in the world, Boiling Lake is a flooded fumarole from a volcano in the area known as the Valley of Desolation. These words perfectly capture what you’ll find if you’re daring enough. 200 feet wide and its depth unknown, the lake is enveloped by vaporous clouds that resemble a cauldron of bubbling water superheated from the molten magma below the surface. Breathtaking vistas surround it, with clear views of the ocean, Martinique, and a terrain sculpted by erosive and volcanic forces of nature over 200 millions years in the making. The surrounding area is also home to some of the hardiest creatures on the planet — small lizards and a few species of insects the survive extreme conditions. Hiking to Boiling Lake is one of the best experiences in Dominica, but it’s also very demanding. Unless you are very familiar with the terrain, it is highly recommended to hire an experienced guide. They will not only make your journey safer and provide interesting information about wildlife along the trail. Tour Operators include:

Indian River
Be transported from the urban environment of Portsmouth to the warm embrace of nature in minutes by taking a tour up the scenic Indian River. The river got its name because Kalinago (Carib Indian) lived along its banks and used it as an access route to the Caribbean Sea to transport goods for trade with sailors and with other natives along the island chain. With its coastal wetland dominated by the Bwa Mang trees, the Indian River is among the most picturesque of Dominica’s 365 rivers. Experienced boatmen in hand-oared river boats will take you silently past many types of wild life and plant life along the swampy river bank. They can also show you where scenes from Pirates of the Caribbean were filmed. Up the river you can visit the renowned Bush Bar for a variety of rum drinks and tasty local cuisine.

Emerald Pool
Whether you’re planning an extended stay or a day trip from a cruise ship, Emerald Pool is not to be missed. Fed by the clear mountain water rushing from a 40 foot waterfall, the pool’s waters appear emerald green in the leafy, filtered sunlight. Its color and drama have served as the backdrop of several movies as well as weddings. Located in Morne Trois Piton National Park, Emerald Pool is surrounded by verdant forest and offers swimmers and waders a cooling respite on humid days. Just ten minutes off the interior Roseau-Castle Bruce Road, it’s the most accessible waterfall in the UNESCO World Heritage Site. This is a bucket list item for many world travelers.

Kalinago Territory
Home to the indigenous Kalinago Tribe. The Kalinago are eager to treat guests to the joys of living with nothing more that what the land and sea and sky provide. Originally known as the Caribs, the Kalinago are believed to have originated from South America and represent the last remaining tribe of the pre-Columbian Carib Indians since 3000 BC. Everything changed of course, when Christopher Columbus arrived, followed by European interlopers with whom the Kalinago battled to keep their life and lands. Eventually, the Kalinago had to flee to the isolated eastern side of Dominica. Their rituals and traditions reach back to the island’s original settlers. In 1763, when the British gained control of Dominica, the Kalinago were officially given 232 acres of land originally dubbed the Carib Reserve. Their territory was expanded to 3,700 acres in 1903. Here you can learn their ageless crafts of basket weaving, canoe building, pottery making, and wood carving. If you dine with the Kalinago, everything contains natural ingredients, and entertainment centers on human voices, drum dance and other handmade instruments. Their rich language and their deep connection to nature can be heard in their name for their island, “Waitukubuli,” meaning “tall is her body.” Tours of the territory — offered by Kalinago guides — include hikes along the Asulukati river and its waterfall as well as climbs to the peak of Kabet.

Fort Shirley
Part of the Cabrits National Park on a scenic peninsula , this fortress is most famous for a revolt by African slave soldiers in 1802, an event which would lead to freeing of all British slave soldiers in 1807. The fort was built within a volcanic crater and served as part of a network of defenses along the Lesser Antilles during international conflicts between Britain and France in the 18th and 19th centuries. Some of the fort’s ruins are being slowly reclaimed by the encroaching forest. Offering stunning views of Prince Rupert Bay, nearby beaches, and the mountains rising behind it, Fort Shirley is a natural lookout on the region. Much of the fort is intact or has been rebuilt, allowing you to see what looked like back when active. Climb the walls, look out from a row of cannons, and imagine setting your sight on ships slowly drifting into range. Officer’s Quarters are home to weddings, receptions and concerts. And if you’re planning a visit during May or June, the Jazz n’Creole Festival on your itinerary.

Calibishie
The main village on the north coast, it features dramatic cliffs, red rocks, and rivers gushing down from the mountains. This ancient fishing village offers you a sleepy spot to unwind. Its coast cradles palm-fringed beaches and offers a variety of places to stay — from simple guesthouses to cliff-side cottages overlooking the sea to a private villa perched on a mountainside. Alongside the only barrier reef on the island, Calibishie takes its name from the Arawakan words meaning “net of reefs.” The reef and the surrounding lands provided the Kalinago — Dominica’s indigenous people — with an ideal setting for fishing, farming, and materials to build thatched homes and canoes. Beyond the beach, you’ll find freshwater rivers with secluded bathing pools, tumbling waterfalls, and the tranquility that only a tropical rainforest with its exotic birds and lush vegetation can provide. Calibishie is one of the few places in the world where you can travel from the seashore to rain forest in little more than a mile.