Curacao International Airport (CUR) is the major airport for this island-nation only 40 miles off the coast of Venezuela. Located half an hour from Willemstad, it features a long runway for big jets and a modern terminal. Many international flights from North America and Europe connect to the island through Aruba, San Juan, Bonaire, St. Maarten, Miami, Amsterdam, Panama City, Santo Domingo, Port Au Prince, Toronto and NYC. The airport counter staff are very professional and most are well versed in English.

Most travelers are from the Netherlands and USA, followed by Columbia and Canada. Departure & Transfer Fees are included in the ticket price when people Americans fly on any of these airlines to Curacao:

If you fly JetBlue here, prepare to pay the departure tax.

Taxis
Taxis are available at the airports and downtown. Taxis in Curacao are easily recognized by license plates marked with the letters “TX”. Taxis fares are unmetered, but zoned. As the driver for a Zone Fare Sheet. Fares are per taxi, up to 4 passengers. A surcharge will be added to taxi fares, if there are more than 4 passengers or if before 6am or after 11pm. There can also be small fees for an excessive amount of luggage. So you don’t want to overstuff a taxi. Sample Fares are:

The good news is, many taxi drivers act as tour guides to different parts of the small island, if you want to rent their services for 2-3 hours.

Rent a car at a reputable car rental company before you go on vacation and pay the extra
insurance. There’s nothing like an accident to ruin a vacation. Confirm that there are no additional costs must be paid when you want to pick-up your rental car. Car rentals are plentiful at the airport and near the cruiseport. Not every accepts smartphone vouchers. Bring your printed voucher of your rental agreement with you. The list of Recommended Car Rental Services is Alamo, Avis, Budget, Dollar, Hertz and Thrifty.

Drivers keep to the right on Curaçao. You have the right and overtake on the left. Speed limit in the city is 40 kph = 25 Mph. Outside of town its 60 kph = 37 Mph, except hairpin curves. On T-junctions traffic on the dead-end road must give right of way to all traffic from left and right. Parking is prohibited on bridges and a yellow stripe on the side of the road. You must be completely off the road.

The bus company is Autobus Bedrijf Curacao, but public transport service on Curacao is very limited, so only take it short distances where you can walk back or don’t mind waiting an hour for the return trip during weekdays, longer on weekends. There are other small buses that run more frequent, but without a schedule. The two major bus stations are at Punda +(599-9-641-6257) and Otrobanda +(599-9-462-8359). 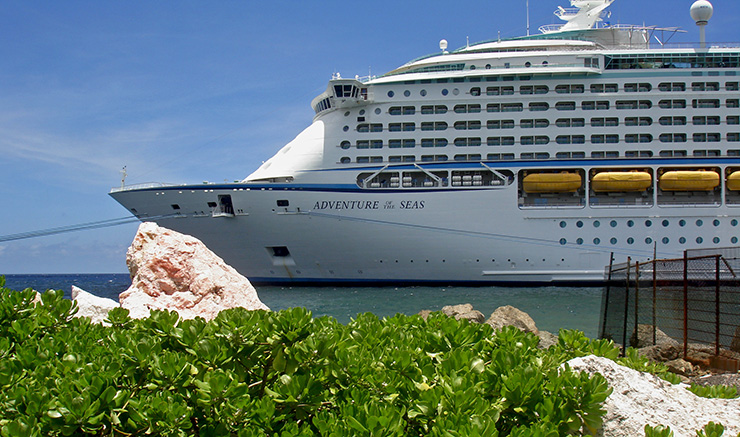 Every year, hundreds of thousands of visitors arrive on the island from cruise ships berthed at Willemstad. Walking distance from the cruise port the city’s iconic Dutch Colonial architecture to explore. Most cruise ships dock at Mega Pier Cruise-Terminal. Cruise travelers will find most services and amenities are in the open air terminal next to the Mega Pier for refreshments and souvenirs. Complimentary Wi-Fi is available at the terminal. The cruise terminal deserves kudos for including Wheelchair and ECV Rental for those with mobility difficulties.

Mathey Wharf is the other possible docking. With capacity for as many as 4 ships, this terminal occupies the old wharves of Otrabanda and Punda next to Queen Juliana Bridge across the Saint Anna Bay. Their docks fill up when Mega Pier is occupied. At the Mathey Wharf the cruise traveler will also find an Information Booth, Restrooms, a Taxi stand, a stand for independent tour operators, and souvenir shops. Once outside, a left turn will take you past Brion Square and the floating Queen Emma Bridge pedestrian crossing to Punda, another historic landmark neighborhood.