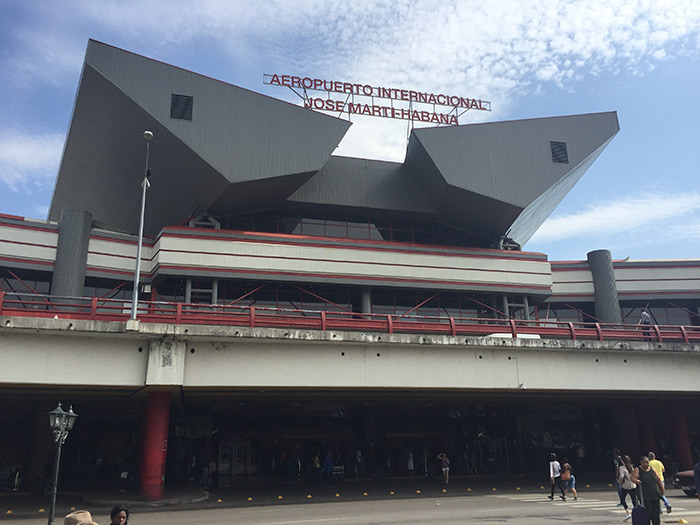 José Martí International Airport (HAV) located in Havana opened in 1930. It is located 9 miles southwest of Havana and Cubana de Aviation, Aerogaviota, AirFrance, Southwest, AirCanada and Aeroflot provide daily service. It is Cuba’s main international gateway, and its 3 terminals serve several million passengers each year. Terminal 1 is primarily for domestic flights. Terminal 2 opened in 1988, primarily for charter flights to the United States. International Terminal 3 offers many modern facilities and jetways that the former international Terminal 1 did not provide. For transfer between terminals, bus services are offered. Terminal 5 is mainly used by AeroCaribbean (domestic and Caribbean flights) and Aerotaxi (domestic charters).

In the 1960s, the airport was bombed by a CIA-sponsored group of Cuban exiles attempting to overthrow Fidel Castro. Residual effects from days are that Cubans are not allowed to own aircraft or use the airport for private or commercial flight. Only government-owned and foreign commercial aircraft are allowed to use the facilities. Today, Copa Airlines is the foreign airline with most flights to the airport, with roughly 5 daily flights from Panama City and Bogotá. 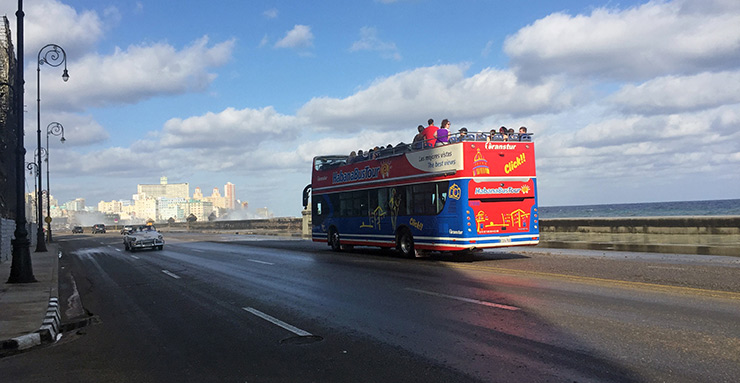 Havana Bus Tour on the Malecon;(c) Soul Of America

Taxi companies in Cuba are government-owned. They are used mainly only by tourists. Taxi fares are reasonable compared to major cities such as London, Paris or New York. Their meters run at CUC$1 to start and CUC$1 per kilometer in cities (10 KM = 6.25 Miles). Taxi drivers typically offer foreigners a flat, off-meter rate that usually works out to what you would pay with the meter. The difference is that with the meter, the money goes to the state to be divided up. Without the meter, the drivers pockets it all.

Catch Havana Bus Tour for tremendous value due to their hop-on-hop-off nature which permits you to see many sites on a day pass.

Public transportation is only good in Havana and Santiago de Cuba. In Havana, many vehicles were second hand and donated to Cuba in the mid-1990s and despite the United States trade embargo, American-style yellow school buses are increasingly common sights. On seven key lines in and out of the city, service is provided by Chinese Zhengzhou Yutong Buses. In 2008, they replaced the camellos trailer buses that hauled as many as two hundred passengers. There are also CNG-powered and new vehicles, donated to Havana that display Transportes Urbanos de Sevilla, S.A.M.

Two national bus companies traverse Cuba. Viazul operate a fleet of modern and comfortable coaches on longer distance routes. They are principally designed for tourists. Schedules, prices and ticket booking can be done online, at any international airports of Cuba or National Terminals across Cuba.

AstroBus lines operate with modern Chinese Hutong buses that are air conditioned coaches at affordable prices. The Astrobus has routes from Havana to 13 provincial capitals across the country. AstroBus, is available using Cuban Pesos (money).