Christopher Columbus, on his second voyage to the Americas in 1494, landing at various inlets of southern Cuba, including what was to become Guantánamo Bay under orders to conquer, colonize and convert the pagans of the New World to Catholicism. On arrival in Hispaniola first, Columbus observed the Taíno Indians. Initially, there was little resistance.

In 1511, Diego Velázquez de Cuéllar set out from Hispaniola for the first Spanish settlement in Cuba, with orders to conquer the island. They were resisted by the local Taíno population. In 1514, a Spanish settlement was founded in what became Havana. They tried to enslave the Tainos. The natives both succumbed to diseases brought from Spain and refused to work, preferring to hide in the mountains. 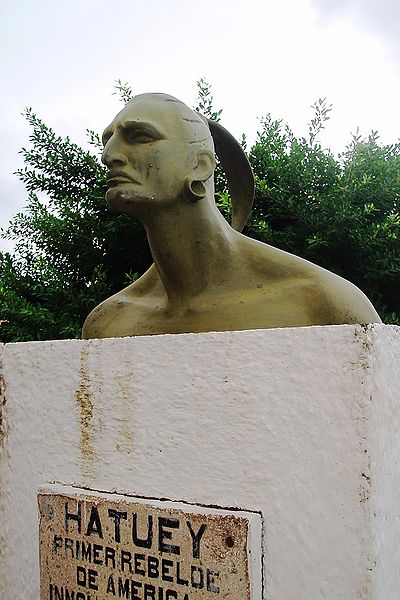 Desperate for plantation labor, the Conquistadors sought West Indian slaves from surrounding islands and the continental mainland. Like the indigenous peoples, they also hide in the mountains or died of Spanish diseases. Despite those abhorrent relations, Taínos taught the Spanish how to nurture tobacco and consume it in the form of cigars.

Under the Spanish Laws of 1552, indigenous Cubans were freed from encomienda, and seven towns for indigenous Taíno families were setup in several places, mostly eastern Cuba. An association of indigenous families near Santiago remains today.

Some 400 Taíno terms and place-names surviving today. The names Cuba, Havana, Camagüey and many others were derived from Taíno, and indigenous words such as tobacco, hurricane and canoe were transferred to English as well.

On an island dominated by rolling plains, rich soil and plenty of rainfall, Spaniards had all the nature resources to establish sugar and tobacco as Cuba’s primary export products. Its field labor needs escalated demand for African slaves. However, restrictive Spanish trade laws made it difficult for Cubans to keep up with plantation technology advances elsewhere the Caribbean. The Haitian Revolution in Saint-Domingue (Haiti), from 1791 to 1804 generated thousands of French refugees fleeing the slave rebellion. They brought money, plus better sugar refining and coffee growing expertise to Cuba.

With slavery legal in Cuba until 1833, Cuban plantations became the most important world producers of sugar and remained major producers of coffee and cigars. Such plantation prosperity developed cities in Cuba that primarily supported the Spanish colonial empire.

After his second deportation to Spain in 1878, the pro-independence Cuban activist José Martí moved to the United States in 1881. An intellectual and writer, he began mobilizing the support of the Cuban exile communities in Tampa and Key West, Florida. He sought Cuban independence from Spain, but opposed U.S. annexation of Cuba.

All slavery in the Western Hemisphere was abolished by 1886, making Cuba the second-to-last country in the Western Hemisphere to abolish slavery — Brazil being the last. Plantations then looked for other sources of cheap labour, such as Chinese colonists and Indians from Yucatán. Jose Marti died in military action to free Cuba during the Battle of Dos Ríos on 19 May 1895.

After the Spanish–American War, Spain and USA signed the 1898 Treaty of Paris causing Spain to cede Puerto Rico, the Philippines, and Guam to the United States in return for US$20 million. Cuba gained “paper” independence from the U.S. in 1902. But the USA retained the right to intervene in Cuban affairs and to supervise its finances and foreign relations. Under the Platt Amendment, the USA also leased Guantánamo Bay naval base. These stifling arrangements effectively made Cuba client-state to the U.S. government.

Following disputed elections in 1906, the USA occupied Cuba and named a governor. In 1908, self-government was restored. In 1912, the Partido Independiente de Color attempted to establish a separate black republic in Oriente Province, but was suppressed with bloodshed.

In 1924, Gerardo Machado was elected president and tourism increased. American hotels, casinos and restaurants were built, which led to big increases in gambling and prostitution. The 1929 Wall Street Crash led to a collapse in the price of sugar and political unrest. Protesting students, known as the Generation of 1930, turned to violence in opposition to Machado. A general strike and army revolt forced Machado into exile in August 1933. He was replaced by Carlos Manuel de Céspedes y Quesada.

In 1933, Sergeant Fulgencio Batista overthrew Cespedes. A five-member executive committee was chosen to head a provisional government. But in 1934, Batista was the real power behind a series of puppet-presidents.

In 1940, a new constitution was adopted, which included the right to labour and health care. Batista was elected president from 1940. His government carried out major social reforms. Several members of the Communist Party also held office under his administration. Batista adhered to the Cuban constitution preventing his re-election, allowing Ramon Grau San Martin to win the next election, in 1944.

Grau undermining the deeply flawed Cuban Congress and Supreme Court. Carlos Prío Socarrás, a protégé of Grau, became president in 1948. But their two consecutive terms of the Auténtico Party brought an influx of investment, that raised living standards and created a Cuban middle class and more small businesses.

After living in Florida, Batista returned to run for Cuban president in 1952. Facing electoral defeat by the communist party, he invited and received financial, military, and logistical support from the United States government for a military coup. Back in power, Batista suspended the 1940 Constitution, revoked most political liberties, and outlawed the Communist Party. He then aligned with the wealthiest landowners of sugar and tobacco plantations, and presided over a stagnating economy that widened the gap between rich and poor Cubans. In 1956, the the wealth and liberties gap fueled Fidel Castro and a small band of supporters to start a rebellion against the Batista government.

In 1958, Cuba was an advanced country by Latin American standards, obtained at the cost of a large peasant class. School graduates entering the workforce could not find jobs. The middle class, which was comparable to that of the United States, became increasingly dissatisfied with unemployment and political persecution. Batista stayed in power until forced to exile in America, December 1958.

In January 1959, Fidel Castro ascended to power in Cuba with a communist dictatorship government. Most Cuban business owners left the country because their businesses would be seized and freedoms limited by the communist dictatorship. Since the Dominican Republic remained a client-state to the USA, Cuba represented Russia’s only communist-friendly outpost in North America. As a result, Cuba would later receive financial and military support from Russia.

American government and business leaders feared communist influence only 90 miles from Florida and that other Latin American nations might rebel and choose communism, then affiliate with Russia. To prevent communism spreading beyond Cuba, U.S. government’s first step was to designate Miami as a point of embarkation and assistance for Cuban ex-patriots. To use a chess metaphor it was a “Queen” in the Cold War Cuba Policy directed at Russia. As a result, U.S. government leaders could parade successful Cuban immigrants to Latin America as an example that Democratic-Capitalism works better than any Communist-Dictatorship.

Cuban insurgents fought a long rebellion in the Escambray Mountains against Castro government. The government’s vastly superior numbers eventually crushed the insurgency. In April 1961, the U.S. got embarrassed helping 1,400 Cuban exiles in the failed Bay of Pigs invasion.

In 1962, Cuba was suspended from the Organization of American States (OAS). The Cuban Missile Crisis occurred in October 1962. By 1963, Cuba was moving towards a Communist system modeled after Russia. In 1966, the rebellion in the Escambray Mountains was finally crushed by Castro’s superior forces. 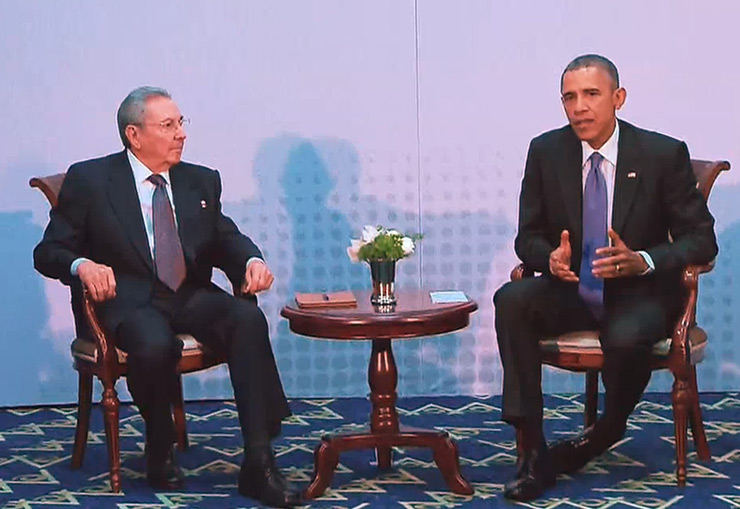 Fidel Castro’s reign lasted until 2008, turning over the government to his brother Raul Castro.