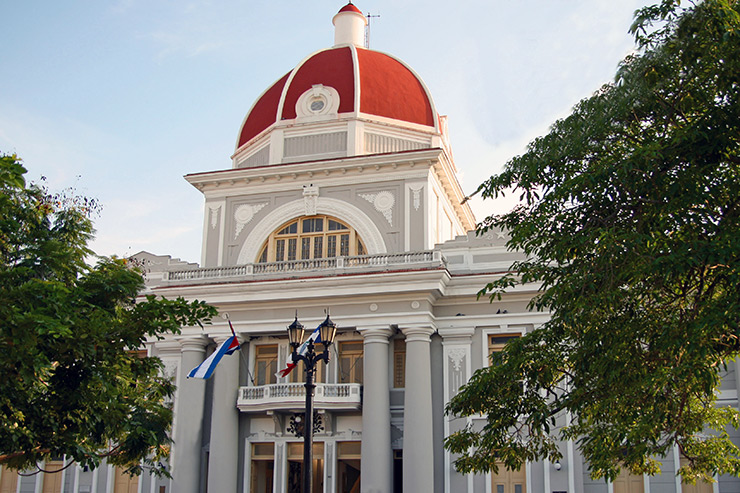 Cienfuegos, the Pearl of South Cuba, is known for November-April is the best time to visit the city, though my experience says the city offers a heartwarming reception regardless of the time of year or weather — Mazel Purnell

I was sitting with my Australian friends at a sidewalk table in front of the Café Teatro Terry on the north end of Parque Martí in Cienfuegos, Cuba when I felt a light touch on my arm. I turned to see an adorable brown girl dressed in a burgundy and white elementary school uniform extending a beautiful dark rose-colored hibiscus flower. Standing there with her big blue school backpack slung over one slender shoulder, she smiled shyly and looked directly at me with her big brown eyes as she extended the flower.

To say that I was astonished by this simple generous gesture is an understatement. Of the eight people at the table, why did she pick me for such generosity? Was she partial to my American accent or was it because I was female and the only one in my group who was brown like her?

I was truly moved by her kindness. It occurred to me that perhaps she expected a tip. But then I remembered that I was in Cienfuegos, not Havana or Santiago de Cuba and an inner voice whispered that perhaps she had no ulterior motive. With emotions swelling in my chest, I took the flower and managed to say something that I hope sounded like “gracias”. At my request, she posed for a photo that will forever remind me of the warmth that I felt from the people of Cuba during the short time I spent in the country.

Even at eight or nine years old, that little girl perhaps knew the significance of the hibiscus in the history of Cienfuegos, located in the center-south of Cuba. And for me, that made the gift even more special. Nearly 200 years ago, a point under an old hibiscus tree was selected by a surveyor as the starting point for laying out the town. Today the large open space known as Parque José Martí, formerly called the Plaza de Armas among other names, is the historic center of the city and is marked by a kilometer zero round ground plaque in the center of the square. Standing tall in the heart of park is a marble statue of José Martí, a Cuban national hero, poet, journalist, teacher, and the park’s namesake. 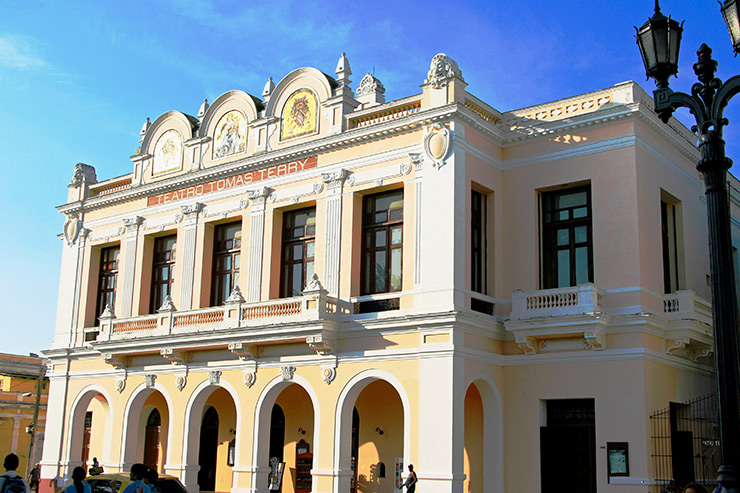 Positioned throughout the park are Italian marble busts of other prominent Cienfueguejos, including Antonio Hurtado del Valle, a revolutionary and journalist known as one of the poets of war; Clotilde del Carmen Rodriguez, a patriot and poetess who designed the flag of Cienfuegos; Alfredo Mendez Aguirre, an eminent surgeon who introduced preoperative anesthesia and other scientific advances; Ramon Maria de Labra, a prolific writer and slave abolitionist; and others.

Marque Jose Martí is flanked on all sides by very well-preserved buildings including the Teatro Tomás Terry on the north side of the historic park. The theatre is one of the most impressive buildings in Cienfuegos. It was commissioned by the sons of the industrialist and former mayor of Cienfuegos, Tomás Terry, to honor their father. Terry arrived in Cienfuegos as a poor Venezuelan emigrant but became rich by trading in sugar and slaves. A Carrara marble statue of Terry stands in the theatre’s lobby. The theatre can seat up to 950 people and contains many of the original Cuban hardwood carved seats. On the ceiling are classical reliefs and nymphs by Camilo Salya. The Cuban National Ballet and Opera still perform there. I attended a free musical performance at the theatre during my visit. 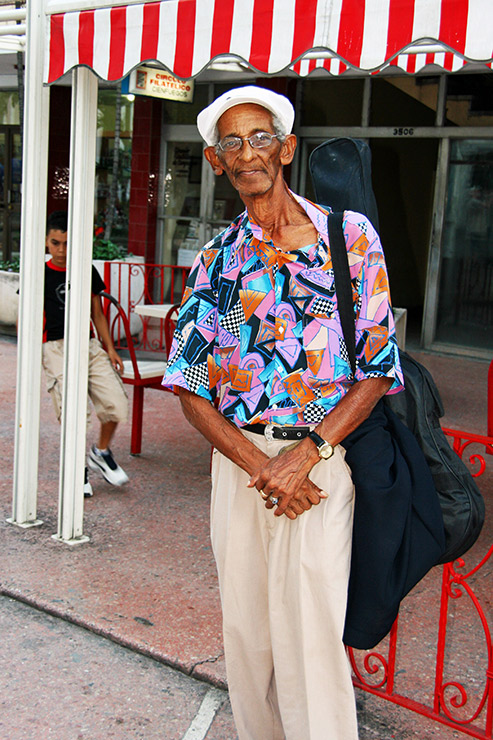 At the western entrance to the park is the Arc de Triomphe, thought to be the only arch of triumph in Cuba. The opposite entrance to the park is guarded by a pair of marble lions, the first of the many sculptures in the park. The park is beautifully landscaped with shrubs, beds of colorful annuals and benches, along with a lovely fountain and domed gazebo.

Also on the western side of the park, is the blue-domed Casa de la Cultura Benjamin Duarte, formerly known as Palacio de Ferrer. A walk up its marble staircase past the beautiful mosaic wall tiles is worth it for an outstanding view of the plaza and other parts of the city and bay.

Dominating the park from the eastern side is the Catedral de la Purisima Concepción erected in 1869. The pale-colored cathedral has a neo-Classical façade with two large red-capped bell towers of different heights, three arched entrances, and French stained glass windows of the Twelve Apostles.

Cienfuegos, founded in 1819, is Cuba’s only city founded by the French. The European influence can be seen in the wide, straight tree-lined Parisian-style avenues and the eclectic architectural presentation. The city is laid out in easy-to-negotiate squares and is one of the cleanest cities in Cuba. In most tourist literature, Cienfuegos is known as “The Pearl of the South” because of its well-preserved colonial buildings, proverbial cleanliness, and beautiful views.

This city, Cuba’s third-largest port, has one of the highest levels of business development in the country. Much of the prosperity began after the Independence War against Spain ended and American investors began to pour capital into sugar mills located in the province. In the early 20th century, the United States was the principal market for Cienfuegos.

With a business culture based on sugar cane, mango, tobacco, and coffee, Cienfuegos is not dependent on tourism for survival. The city is home to the only deep-water terminal on Cuba’s south coast, plus a sizeable fishing and shrimping fleet. Cienfuegos handles roughly 30% of Cuba’s sugar exports. With a relatively robust economy, its residents tend to be more prosperous than their brethren in most other Cuban cities. 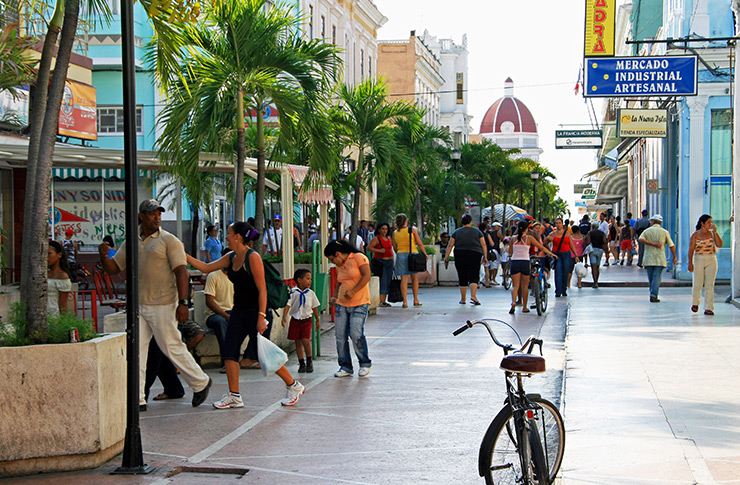 Paseo del Prado, the longest boulevard in Cienfuegos and in all of Cuba for that matter, runs through most of the city and into an area known as Punta Gorda. At the south end of Paseo del Prado is the Palacio de Valle, one of the city’s best-known landmarks. The palace architecture is an eclectic mix of Gothic, Neo-Moorish, and Venetian. Built for a wealthy sugar merchant, Aciclio de Valle Blanco, the palace rooftop terrace offers an incredible view of the bay. If timed properly, the third-floor balcony is a great place to have a cocktail and watch the sunset over Cienfuegos Bay for a nominal fee of two pesos. On your way up the steps toward the iron staircase, you’ll pass Carmen, the flamboyant piano player who will pose for a photo or play a song for you – for a peso or two. Today most rooms of the palace are used as high-end Italian restaurants.

The best way to get from the historic downtown area to Punta Gorda is to hop on a ride on one of the horse-drawn carriages. It’ll cost around two pesos each way but it’s a lovely ride down the wide boulevard lined on both sides with royal palms with stately old pastel-colored homes on one side and the Bahia de Cienfuegos (Cienfuegos Bay) on the other.

Beginning just south of Avenida 46 where a seawall separates Paseo del Prada from the Bahia de Cienfuegos, the street is known as the Malécon. Similar to the malécon in Havana and Baracoa, the street along the seawall is where the locals hang out to socialize. With 88 km2 of water, the bay is the perfect place for fishing as well as casual and competitive canoeing. 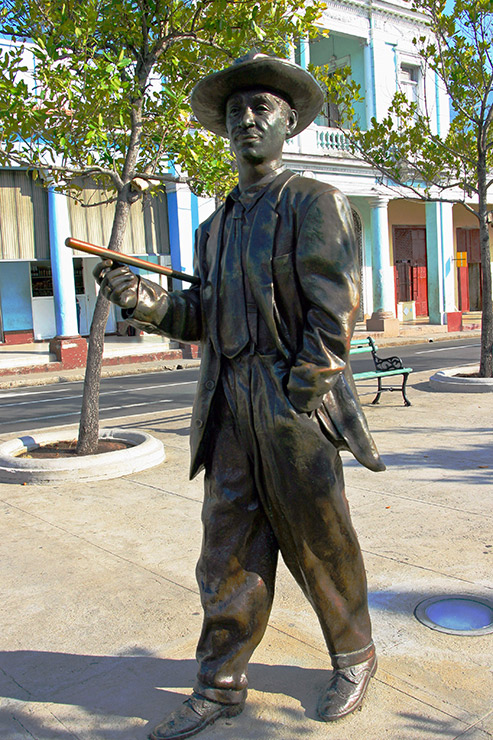 Cienfuegos, now a mid-sized city of just over 100,000 residents, has been the scene of flourishing economic, arts and social activity and an outstanding early example of urban planning in Latin America since the 19th century. Although the local administration remains concentrated in the downtown area, the entire city has retained its compact, historic authenticity and integrity.

To fully appreciate this jewel of a city, plan to spend at least one full day and night. In addition to enjoying the José Martí Parque, spend some time strolling in down the automobile-free Avenida 54 also called “El Bulevar”, grab a bowl of Cuba’s famous ice cream at the Coppelia near Paseo del Prado and Avenida 52, take in a performance at the Teatro Tomás Terry or enjoy the live music, comedians and cabaret acts at Club Benny Moré.

Benny Moré, an Afro-Cuban, is considered by many of his fans to be Cuba’s best-known and most beloved singer and musician. He mastered most genres of Cuban music and chose to remain in Cuba after the revolution when other musicians chose to flee the country. He was well known throughout the Caribbean and Central America and toured in the United States. In Cienfuegos, a festival is held in his honor each September.

Also, take a little extra time to enjoy the attractions near the city such as Cemeterio Tomás Acea, a neoclassical cemetery overlooking the bay, and the 232-acre Jardin Botanico Soledad (Botanical Garden) located about 12 miles east of the city where you can see more than 14,000 plants including more than 16,000 trees.