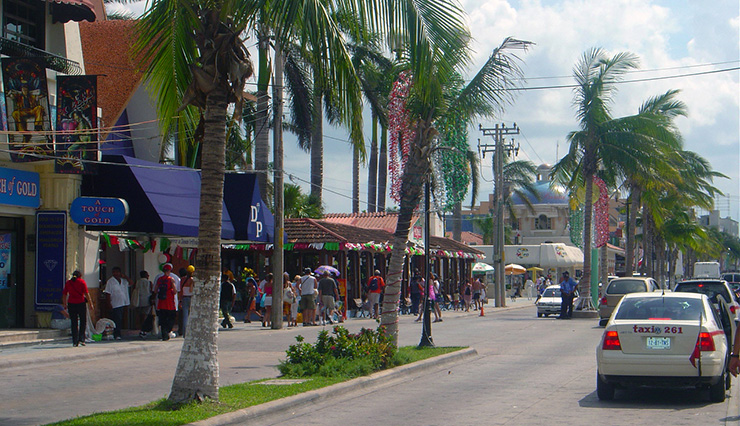 The first Maya settled in Cozumel 2,000 years ago and life revolved around religious ceremonies. Cozumel became one of the most important sanctuaries in the Yucatan region. Cozumel derives its name from the Mayan words Cuzam (swallow) and Lumil (land of), which form the word Cuzamil (land of swallows). The Mayan word changed with time to the Spanish name of Cozumel. The Mayans believed the island to be a sacred shrine.

Religious pilgrimages were common to the island especially from women who were either pregnant or wanted to get pregnant. They pay homage to the goddess Ix Chel, the deity of the moon, pregnancy and childbirth. It was a tradition among the Maya People in general to make the trip at least once in their lifetime to the shrine of this goddess. Merchandise from far away places transacted in this part of the Mayan Kingdom.

By 1518, the Spanish explorer Juan de Grijalva arrived to the coast of the island on Holy Cross Day (May 3rd), named this land as “Isla de la Santa Cruz” and proclaimed the land as property of the Doña Johanna and Don Carlos Kings of Spain. The Spanish arrive at Cozumel on May 06 making a peaceful stop on the island, received by the locals, exchanging gold and a variety of goods.

Juan de Grijalva ordered the chaplain Juan Díaz to offer a mass on the same place that the islanders had a temple therefore on may 6th the first catholic ceremony was held in México, at a location named by the Spanish like Saint John, where every year mass is still celebrated by the locals.

Hernán Cortés arrived on Cozumel in 1519. a year later, starting his conquest of Mexico (and Belize). Initially, there were no large-scale confrontations between the Indians and the Spaniards on the island. But by 1524, Cortés reign of conquest was complete. The Mayan ruler of Cozumel accepted their domination peacefully. The conquistador proceeded to destroy many of the Mayan temples. At the same time, an outbreak of smallpox killed thousands. By the time, Cortés left Cozumel, the ancient civilization lie in ruins.

By 1525, Francisco de Montejo made a request to the king of Spain to authorize the conquest and development of the Isla of Cozumel (Montejo was one of the captains that arrived with Cortez 9 years prior). Don Francisco de Montejo arrived in September 1527 and gave the Christian name of San Miguel de Cozumel.

As the Spaniards became more familiar with the coast of the Gulf of Mexico, they realized they did not have to stop-over in Cozumel. At the same time, as an immediate effect of the conquest, Mayan trade was nullified and the cult of the goddess Ix Chel suppressed. The islanders, deprived of their principal economic activity, were forced to depend only on agriculture for their survival.

By the decree of the King of Spain in 1583, Cozumel became directly dependent upon the Yucatan church. Between 1519 and 1570, the island’s population dropped from 40,000 to 30. By 1700, it was uninhabited, but occasioned by pirates who used Cozumel as a base of operations in the 17th century, including the Henry Morgan and Jean Lafitte. The island was not resettled until 1848.

During the caste war, mestizos founded San Miguel on the west coast and the Mayans settled at El Cedral. From mid-19th century to the beginning of the 20th, Cozumel’s economy boomed and it become an important port. Like elsewhere, the Depression Era hit the island hard until it bounced back when the U.S. built an air base for planes hunting U-boats in the mid-Atlantic during World War II.

Drawn by the clear waters, frogmen came to train and returned home with stories of magnificent underwater vistas. Jacques Cousteau’s declarations in 1960 about the richness of the coral reef surrounding the island made underwater enthusiasts aware of Cozumel’s existence. And the rest is history.