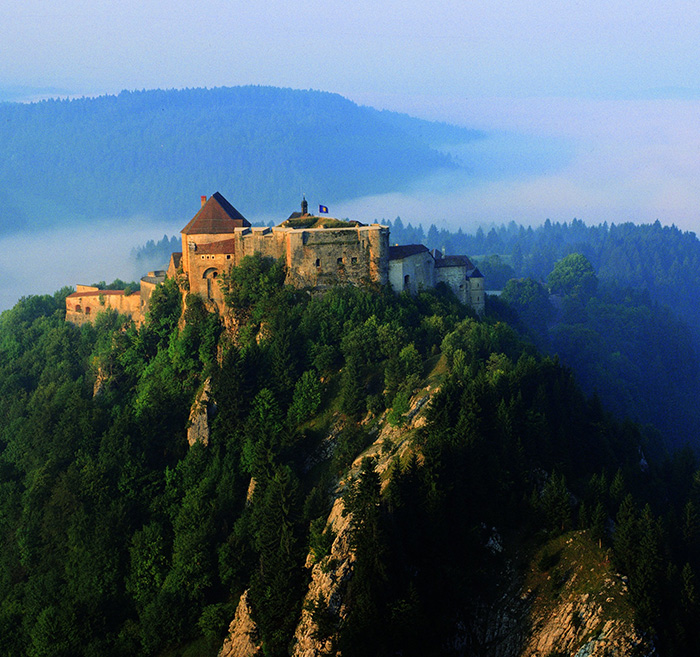 Chateau de Joux is a fortress on a hill. It lies about a 45-minute drive or train ride southeast of Besançon and is only a mile south of the next large city in the region, Pontarlier. The hill where the fortress lies looks very much like a mountain. On the other side of the valley, the Dura mountains border Switzerland.

The fortress, aside from being very impressive to look up to when you are down in the valley, is a great place to put a fortress. It’s a good idea to be sitting on a high hill if someone decides to attack your “house”. In the Middle Ages, citing a fortress on a high hill made it virtually impossible to attack when defended well from the inside. All you had to do was throw rocks or boiling oil on the heads of those trying to get in.

After the Chinese canon arrived in Europe via Genghis Khan, fortress castles became obsolete as a defense mechanism.

Sitting atop the ramparts of the fortress is an invigorating and captivating feeling. The town is spread out before you, with the mountains rising in the background; a picture-perfect setting, that gives one a feeling of impregnability. One can easily imagine just wanting to stay here for a long time. The entire perspective is warm, inviting, and safe. Add to this the wonderful and fresh French food, the inviting and friendly town people, the restored fortress with its vibrant and important history, the practicality of wonderful side trips, and you have the substance of a great vacation. The fortress was made infamous by Emperor Napoleon Bonaparte and General Toussaint Louverture.

France abolished slavery in 1794. Napoleon reintroduced slavery in the Colonial Constitution in 1801. He did it partly to please his Austrian wife and her family, who owned plantations in Haiti and other new world nations. The other reason is, that he needed income from sugar plantations to fund his wars in Europe.

Toussaint, born a slave in 1743, had risen to the post of Major General and was further promoted to Governor-in-Chief of the small French colony. When Bonaparte repealed the anti-slavery laws, Toussaint and the island Blacks chose to fight. And fight they did; rolling back one French army after another. Natural allies for the Blacks were the tropical heat and the diseases that festered in the swamps. French soldiers fell by the thousands.

General Toussaint led the only successful slave rebellion in the modern world against a colonial power. He defeated the best armies that France could muster. And at that time, the French armies had defeated all of the armies of the European nations. Napoleon was an acknowledged genius at warfare and politics.

In 1802, General Toussaint and his army continued to decimate French attackers. Napoleon’s solution was treachery. He invited Toussaint to a peace conference at a neutral site where he was betrayed, captured, and quickly shipped off to France. Napoleon had him imprisoned in the Fortress de Joux, now called “Chateau de Joux.” There he would die of pneumonia from exposure to the extreme mountainous cold.

In 1803, Napoleon was desperate to recapture the Caribbean islands and was short of funds to prosecute wars. So he sold the Louisiana Purchase to America for only $15 million. That transaction doubled the territory owned by the United States. Hence, America owes an unacknowledged indirect debt to this Haitian general and his army. 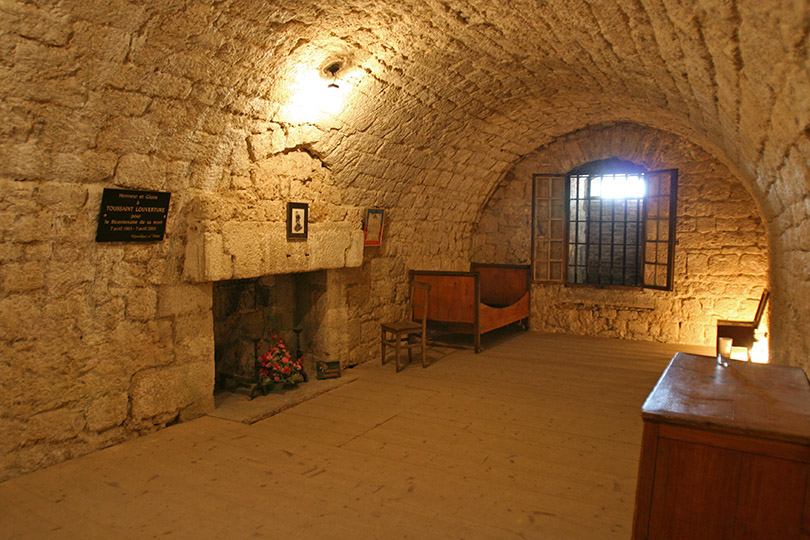 As an unknown journalist wrote, “I visited the cell where he lived and died in Chateau de Joux. It was heated only by a small fireplace. Toussaint wrote to Napoleon many times protesting his harsh treatment and imprisonment. He refused to hear him, sending one of his generals to inquire about Toussaint’s personal fortune. When informed that he had not accumulated any such fortune, Bonaparte let him remain in the cell during the harsh mountain weather.”

Fortunately for the Haitians and Blacks around the globe, Toussaint’s second in command continued to rout and ravage the French until they quit the field and the island. The world’s first Black republic was raised on 1 January 1804. Haiti became an independent nation.

Sadly it also became a pariah nation since none of the European powers wanted a repetition of Toussaint’s success in their many colonies around the world. They refused to trade goods with Haiti. Tragically, America joined this “League of Shame”, despite similarities in our heritage that should have caused our nation to join with and honor the Haitians.

Toussaint has been properly immortalized by the Haitians. Large numbers visit this cell of their greatest leader and father of that country.

A bust of Toussaint has been erected just outside his cell. I was honored to take a picture of the bust and the Haitian Ambassador to France, Lionel Etienne. Love and pride, and subdued repressed anger at the French who took this great man from them, their George Washington and Thomas Jefferson rolled into one, were reflected on his face. Yet gratefulness was there as well; the gratefulness for the honor that the French are now bestowing upon Toussaint and the Haitian people by holding up this man as a beacon of liberty.

For he is like our lady liberty, a light, a flame, representing the attainment of freedom for all. This freedom is a goal to love and continue to fight for until all can pursue and gain their liberty from tyranny and greed.

Also in attendance were many other dignitaries such as the UN Representative Against Slavery. He was joined by Evelyn White, the biographer of Alice Walker, M. Bongani Madonda, a reporter for the South African Sunday Times, and other journalists from many parts of the world. Our diverse gathering added to the drama and sense of history.

Out of all the places that I could have been on that warm October day, I am glad I came here. I was deeply touched by the feelings generated among the dignitaries and journalists in our group. All Americans could benefit from a visit to this fortress. Toussaint has transformed it from a place of shame to a beacon of hope to still enslaved peoples. 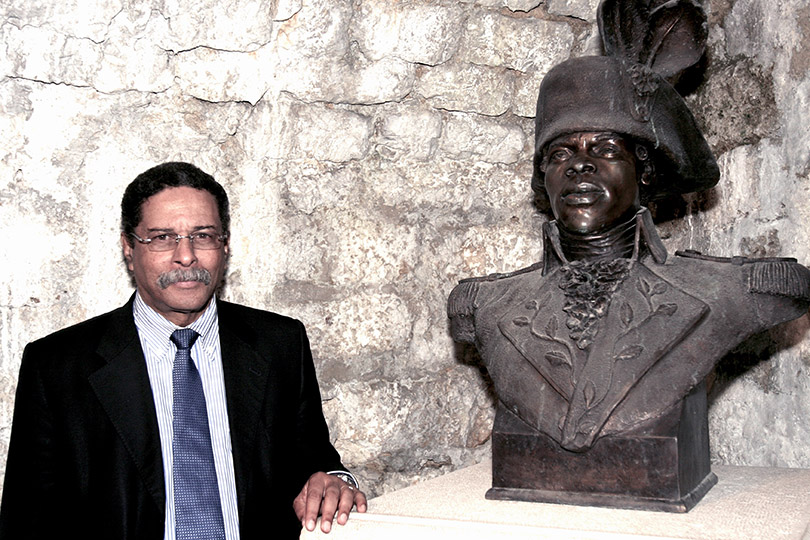 Napoleon came to this view before he died. Imprisoned on the Isle of Elba, he stated that he should have returned Toussaint to become the leader of the nation he helped create, and accepted Haiti into the Republic of France as a commonwealth nation.

Since I have Black ancestors who longed for and fought for their freedom, I am energized to know that at least one nation of us was successful at being men who fought for and received their freedom and the freedom of those they loved. A similar drama to Toussaint’s would be replayed in America sixty years later as Black warriors fought for and died to gain their freedom.

Although denied a leader of their own color by the harsh concepts of the day that obviously did not exist in France, namely that Blacks could not lead, hundreds of Black soldiers and sailors rolled back the tide of oppression and greed of Southern planters and earned the right to walk the earth with head held high. They did not fight for the United States and the union, they fought for their wives, their children, and the right to walk this earth as MEN and WOMEN.

The Haitians plan to take some of the dirt from the fortress back to Haiti for burial. They cannot take the body because Napoleon, in a final act of vindictiveness, buried Toussaint in an unmarked grave. 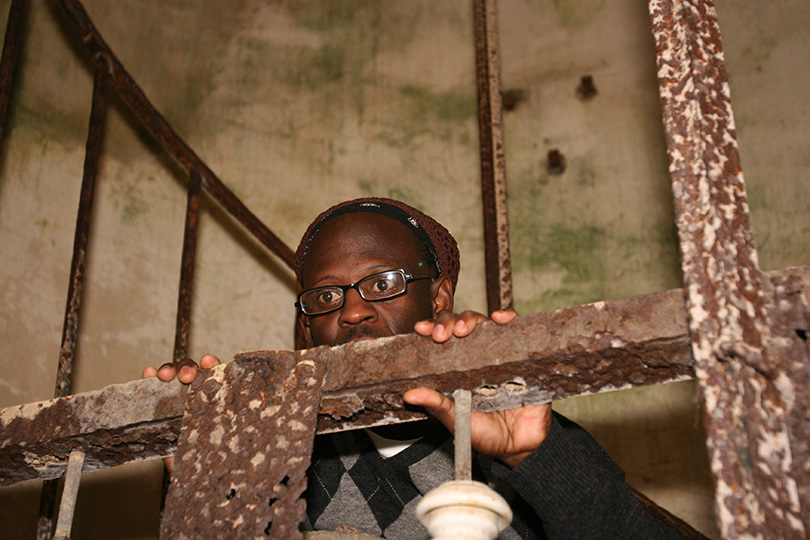 I salute the French for not only refusing to “bury” this story but to celebrate Chateau de Joux as a commitment to Freedom as a human ideal. It certainly must have been and still is difficult for them, a people of immense pride to have the memory of one of their greatest sons defamed by treachery. This emotion was easy to see in the faces and hear in the voices of our guides.

Nevertheless, such is their love and commitment to freedom that they tell this story, even with the shame, because of their love of freedom.