Besancon is best reached by train. In Paris, that’s a bonus. After arriving in Paris and catch a bus directly to Gare de Lyon train station for train service to Besançon. You can find good fast food, excellent coffee, pastries, restaurant-quality sit-down meals, fashion boutiques, and hotels next to the stations.

Parisian railroad stations like Gare de Lyon often have well-dressed travelers along the promenade near tracks for departing and arriving trains. Commuters also use Gare de Lyon, making it a fabulous place for people-watching before your journey. Tahe the TGV Rhin-Rhone high-speed train to Besançon.

Look at the verdant countryside dotted with French farms along the way and visit the Cafe Car at your leisure to converse with other passengers.

The French railway company (SNCF) is proud of 186-199 mph TGV speeds between Paris and other large cities. To reach those speeds, TGV trains require high-speed lines that the French call Ligne a’ Grande Vitesse or more simply LGV. By charter, TGV must also serve some smaller cities along its route.

To strike a balance between a straiter path for higher speed towards Switzerland and serving smaller cities, LGV Rhin-Rhone route features a TGV stop at Besancon Station located 6 miles north of Besançon. This rural TGV station opened in 2011.

SNCF has yet to build the LGV segment from Aisy to Dijon. That means when you leave the outskirts of Paris at speeds up to 186 mph, trains slow to 93-99 mph after Aisy heading to the city of Dijon. Once TGV leaves Dijon, speed then goes up to 199 mph before stopping at Besancon Station.

By 2030, SNCF plans to complete the LGV Rhin-Rhone railway segment between Dijon & Lyon (south) per this MAP.

Besancon tram service began in 2014. There are 2 Tramlines winding mostly west to east through the city. Key stations are the western terminus at Hauts du Chazal, Park Micaud, the eastern terminus of Chalezeule. 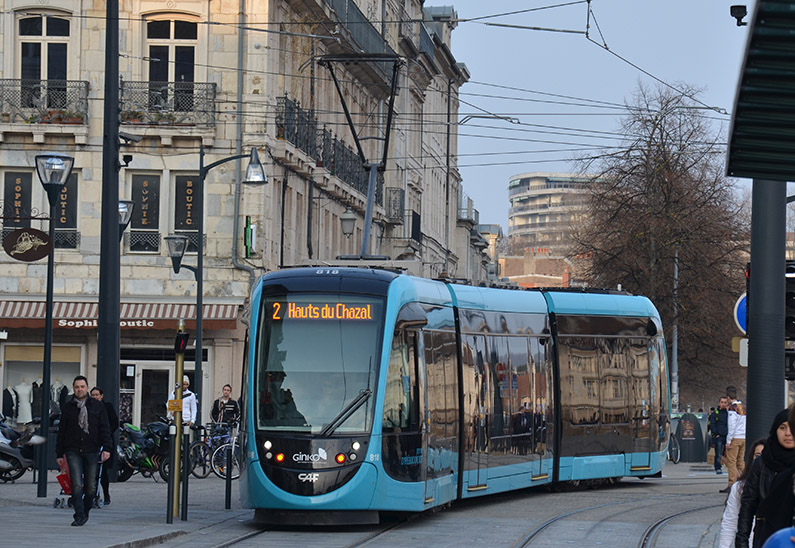 Besançon is situated at the crossing of two major routes. The Northeast-Southwest route follows the valley of Doubs River and links Germany and North Europe with Lyon and southwest Europe. Another highway route links northern France and the Netherlands with Switzerland. The city is directly served by Autoroute 36, which connects the German border with Burgundy region in France. Though we recommend riding the train from Paris to Besancon, a car rental in Besancon expands your regional options to view the countryside.