You are here: Home1 / International2 / Besancon 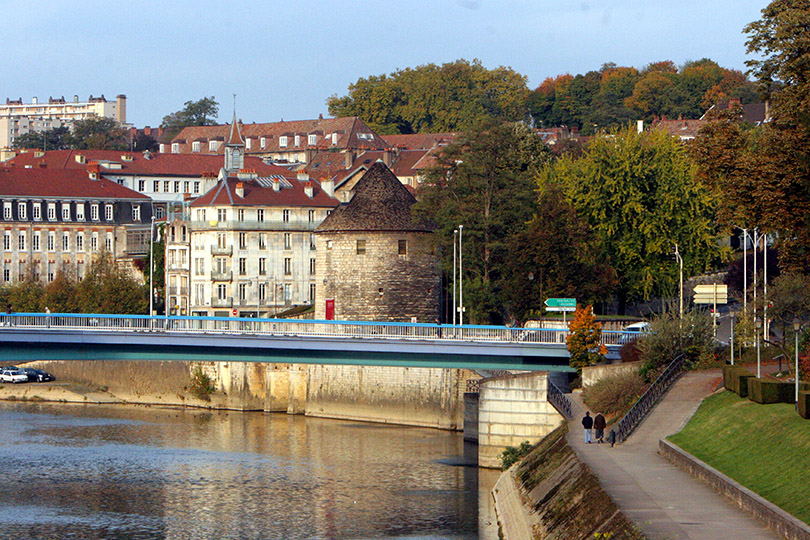 Dougs riverwalk in the fall, Besancon; (c) Soul Of America

I was most happily invited to Eastern France by the French Tourism Ministry to participate and tour the Slavery Abolitionists and Civil Rights Route. Being an American and having no affinity for long names, I shall just call it the “Freedom Road.”

Although delighted, I was somewhat puzzled as I had never heard of such a road in France or anywhere else. I thought that this prize was uniquely African American or at least African, invented by us in our quest for freedom. Internet research did not add much to my knowledge. I resolved to go to France and find out just how much this road resembled America’s civil rights pilgrimage.

After arriving in Paris and catch a bus directly to Gare de Lyon train station for service to Besançon. Everything a person needs can be found in a Parisian train station. Great fast food, excellent coffee, pastries, even quality sit-down meals, and a place to stay at hotels located nearby, some just next to the stations.

These hotels are affiliated with the Transportation Ministry, so standards are high and costs are reasonable. 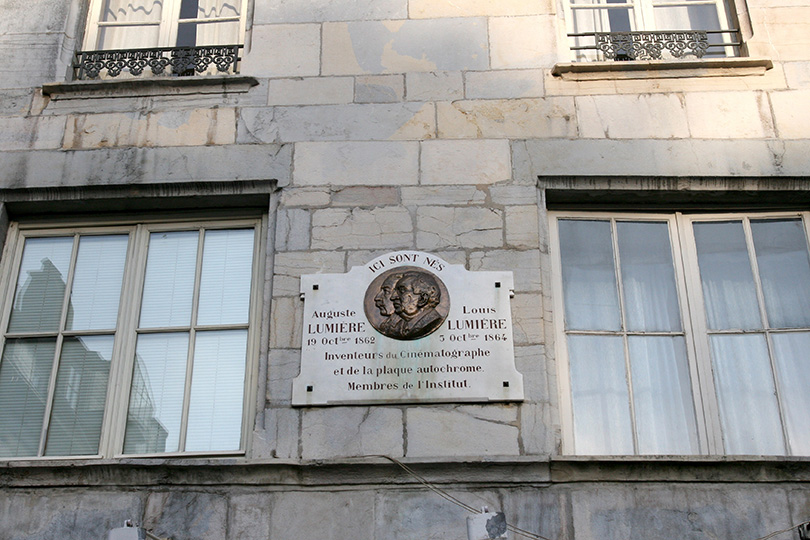 Besancon birthplace of the Lumiere Brothers, inventors of Cinematography; (c) Soul Of America

I surmised that France is a river of ideas, ideas of a people that tend toward freedom, freedom for themselves, and freedom for others. This river has flowed for a very long time, from the time of the Romans who were determined to subjugate them and make them their own, slaves for a Roman world. The Romans became the Arabians, the Muslims, then the English, and lastly the Germans; all determined and capable warriors.

The Romans are and all the others are gone now; only highly prized and interesting vestiges of their passing remain. But the river still burns bright, still flows strong, and the Civil Rights Road marks the passing of those who kept the flame of freedom burning bright.

This trip made me aware that this river began not in Paris, but in the heartland of Eastern France, near Besançon. The French Freedom Road begins in Besançon, then goes to Pontarlier by the Community of the Commune of Larmont, and on to the Château de Joux.

After a night at Besançon, we left for a visit and discovery of the history of the vow of Champagney. We were introduced to the discovery of the church and a walk-up to the stele and the presentation of the “Maison de la Negritude” vow and museum space. Next, we visit a museum honoring the life of Victor Schoelcher in Fessenheim. 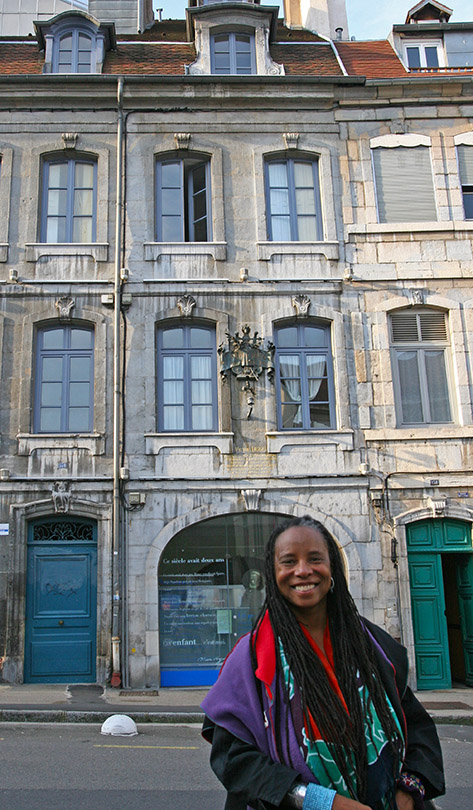 After Fessenhim, we traveled by bus to Colmar, an absolutely delightful town, undamaged by World War II, to become acquainted with the work of Albert Schweitzer. The next stop was Emberménil and a visit to the Abbé Grégoire house, after which we went to Lunéville and a stop at the Château de Lumières.

Besançon is a picturesque ancient town in Eastern France in the Doubs river valley. The town is delightful and located about 3 hours east of Paris and with mountains on each side. The town is enclosed in a loop of the river which itself is encased by ancient, old-growth trees. The river and the town with the same name are surrounded by the Jura Mountains. A series of old stone bridges allow access from the modern part of the town to its ancient core. Besancon has been a trading center from ancient times until today.

The Rue de la République leads from the river to the central place du 8-Septembre and the sixteenth-century Hôtel de Ville. Grande-Rue is the principal street and it cuts across the square along the line of an old Roman road. The town has many lively shops and cafes and a square, the Place de la Révolution, and the excellent Musée des Beaux-Arts.

Besançon has thrived on many forms of trade for centuries as it lay along the route of a major trading route. More recently it was a major center for clock making and in the 18th century, it was also the birthplace of artificial silk – or rayon – 1890. Two magnificent Bonnards (steel security posts) and a wonderful clock collection are a testament to this history. The Palais Granvelle contains an interactive museum that also describes the town’s history of clock-making, the Musée du Temps.

Besançon was home to Victor-Hugo who was born at no. 140 place Victor-Hugo. Just up the street is the Porte Noire, a second-century Roman triumphal arch that spans the street. Beside the arch are the remains of a nymphaeum, a small reservoir of water fed by an aqueduct. Just beyond the arch is the 18th-century Cathédrale St-Jean which houses the 19th-century Horloge Astronomique.

Unlike some of the inhabitants of Paris, the locals are exceedingly friendly and hospitable. In addition to the sightseeing of the town and surrounding area, fine French cuisine, there is gambling readily available. There is also the possibility of many side trips. One could easily spend a week or more in this delightful town and river valley.

The town has a beautiful natural setting with bluish stone walls in most buildings of the old town which were built by the Romans when they controlled life here centuries ago. The town is dominated by the Vauban Citadelle, located appropriately on the town’s highest hill. 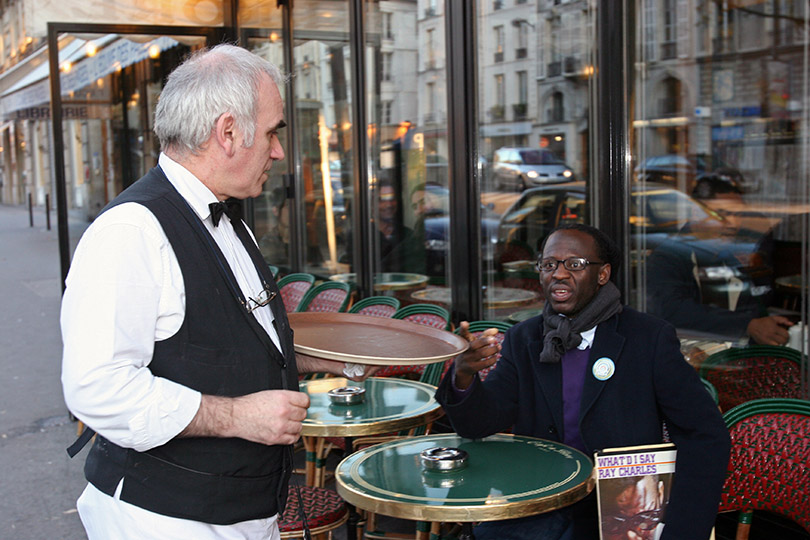 The Besançon River flows with the town on each side. It has mature trees on each side of the river, with a park next to the river with walking paths and picturesque boats that ply the rivers serving locals and tourists with sightseeing trips, some complete with evening dinner cruises.

It was our delight to enjoy such a cruise with the local mayor and the equivalent of the President of the Chamber of Commerce. Our boat was the Restaurant le Chaland (a flat-bottomed péniche boat restaurant, usually docked on the banks of the Doubs river. After dinner, I strolled in the park along the river with my companions, fellow journalists from all over the world. We enjoyed the conversation as a light mist of rain fell. The gentle sounds of the river flowing over a slight waterfall added to the ambiance.

The Vauban Castle was bathed in lights that one could see through the leaves of the mature hardwood trees. This time will long be remembered as one of those truly magical moments that each of us longs for when we first travel to a faraway land. I could have easily spent two weeks or more in this place. Unfortunately, our schedule did not permit extensive lingering, and we were off to lunch at a bistro in the nearby countryside followed by a visit to the Chateau de Joux.

Travel Tips
Click on Travel Tips for ideas. The first tip is that its best to visit during festivals.