You are here: Home1 / International2 / Berlin3 / Nazi Germany and Rebirth of a Nation 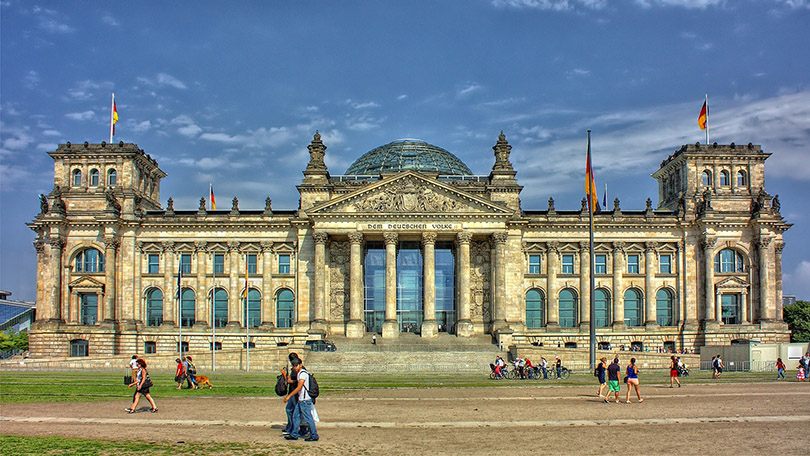 Nazi Germany and Rebirth of a Nation

By November 1932, the Nazi Party held the most seats in the German Reichstag (Congress) but did not have a majority. As a result, no party was able to form a majority parliamentary coalition of a candidate for chancellor. The former chancellor Franz von Papen and other conservative leaders persuaded President Paul von Hindenburg to appoint Hitler as chancellor on 30 January 1933.

In 1933, Adolf Hitler became the German Fuhrer and the Nazi Party came to power when the Reichstag passed the Enabling Act. It transformed the Weimar Republic into Nazi Germany, a one-party dictatorship based on the autocratic ideology of Nazism. The National Socialist regime embarked on monumental construction projects in Berlin to express their authority through architecture. Hitler envisioned Berlin’s renewal projects to turn the city into the new capital of the Greater Germanic Reich.

To their infamy, Hitler’s National Socialists ended democracy and diminished Berlin’s Jewish community by one-third between 1933 and 1939 by putting thousands in a nearby concentration camp. The first concentration camp in the Berlin area is opened just outside the city in Sachsenhausen for regime opponents who were arrested.

In 1934, the city’s elected bodies are disbanded, and the city administration is “forced into line” by firing one out of ten employees.

In 1935, Berlin started the world’s first television broadcasting service. That was important to the XI Berlin Summer Olympics take place in Berlin from August 1 to 16. Hitler planned to show the world the resurgent and athletic supremacy of Nazi Germany by hosting the Summer Olympics. 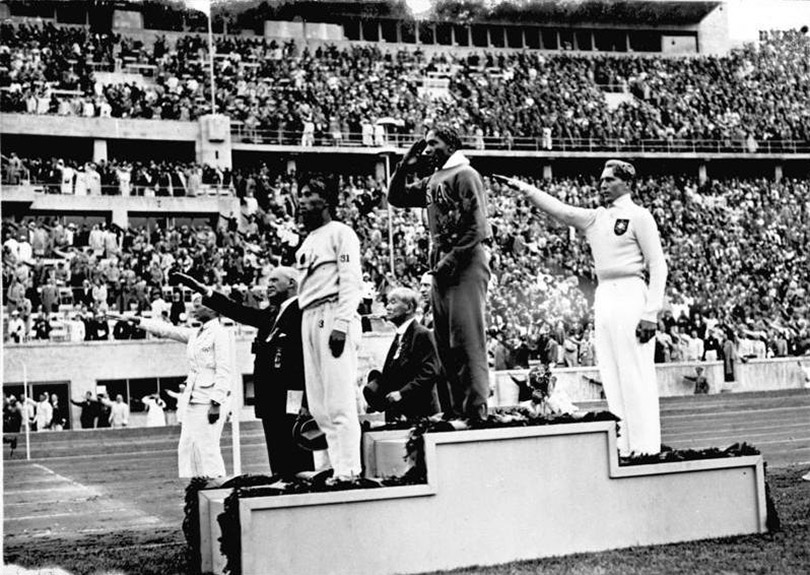 Olympic Stadium 1936 in Berlin, with Jesse Owens on the Gold Medal level

In 1936, during the Olympic Game, anti-Semitic placards and slogans in the city are taken down so they would not be revealed to the world audience. To Hitler’s surprise, Jesse Owens dominates his track & field events. At his medal ceremony, Hitler leaves in disgust. Later Hitler said of African-American athletes, “Their physiques were stronger than those of civilized whites and hence should be excluded from future games.”

In Germany, Owens was allowed to travel with and stay in the same hotels as whites. When Owens returned to the United States, he was greeted during a Manhattan ticker-tape parade in his honor.

In 1937, the 700th anniversary of the founding of the city is marked for the first time by a huge celebration.

In 1938, the annexation of Austria on March 12 makes Berlin the capital of the “Greater German Reich.” On November 9, the “Night of Broken Glass” the Nazi SS set to synagogues in Berlin, loot Jewish-owned shops, and terrorize Jewish citizens, and arrested 1,200 of them. Those arrested were taken to the concentration camps, where most died.

In 1939, World War II starts in Berlin when war is declared against Poland on September 1st. The USA does not enter the war.

In 1940, enemy aircraft bomb Berlin for the first time in August.

In June 1941, Hitler ordered an invasion of the Soviet Union. In December 1941, he declared war on the United States. By the end of 1941, German forces and the European Axis powers occupied most of Europe and North Africa.

In 1942, the Third Reich implements the so-called “Final Solution of the Jewish question,” the systematic annihilation of European Jews.

In 1943, following the catastrophic defeat of the German army at Stalingrad, propaganda minister Joseph Goebbels calls for “total war” on February 18 at Berlin’s Sportpalast. This historic building was razed in 1973.

In the fall, Anglo-American forces begin the large-scale bombing of the city. Around one million residents are evacuated up until the end of the war, and more than 50,000 died.

In 1944, Colonel Claus Schenk Graf von Stauffenberg’s attempt to assassinate Adolf Hitler fails on July 20th. Mass arrests and summary executions follow. Stauffenberg and his co-conspirators are shot, at the Bendlerblock (today’s German Resistance Memorial). Around 2,500 death sentences overall were carried out until 1945 at this execution site (now the Plötzensee Memorial Center).

On April 21 1945, the Soviet Red Army crossed the city boundaries, and the Battle for Berlin began. The Reich Chancellery bunker was initially constructed as a temporary air-raid shelter for Hitler, who actually spent very little time in the capital during most of the war. But he repeated here when the Red Army arrived.

Under Hitler’s racist ideology, the Nazi regime was responsible for the genocide of 6 million Jews and millions of other victims, whom he and his followers deemed subhumans or socially undesirable. Hitler and the Nazi regime were responsible for the killing of an estimated 19.3 million civilians and prisoners of war. In addition, 28.7 million soldiers and civilians died as a result of military action in the European theatre.

On 29 April 1945, Hitler married Eva Braun, in the Führerbunker in Berlin. 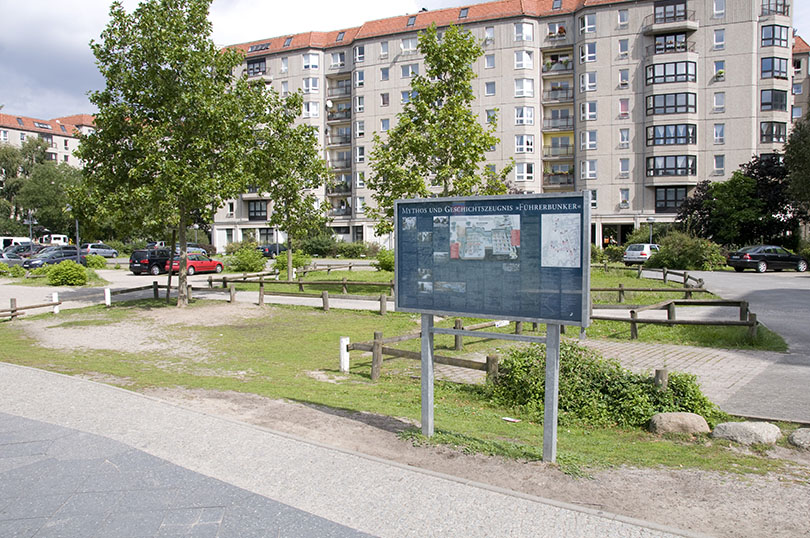 Nazi Germany ends with Hitler’s suicide on April 30 and the surrender of the city on May 2. Their corpses were burned as Hitler had commanded. The site remained unmarked until 2006 when a small plaque was installed with a schematic diagram. Some corridors of the bunker still exist but are sealed off from the public.

During World War II, large parts of Berlin were destroyed during Allied air raids and the 1945 Battle of Berlin. The Western Allies’ bombing destroyed 6,427 acres of the built-up area. Around 125,000 civilians were killed. After the war in Europe ended in May 1945, the victorious powers divided the city into four sectors, analogous to the occupation zones into which Germany was divided. The sectors of the Western Allies (United States, United Kingdom, and France) formed West Berlin, while the Soviet sector formed East Berlin.

In 1948, when the Western Allies extended the currency reform in the Western zones of Germany to the three western sectors of Berlin, the Soviet Union imposed a blockade on the access routes to and from West Berlin. The Berlin airlift, conducted by the three western Allies, overcame this blockade by supplying food and other supplies to the city from June 1948 to May 1949.

In 1949, the Federal Republic of Germany was founded in West Germany and eventually included all of the American, British and French zones, excluding those three countries’ zones in Berlin, while the Marxist-Leninist German Democratic Republic was proclaimed in East Germany. West Berlin officially remained an occupied city, but it politically was aligned with the Federal Republic of Germany despite West Berlin’s geographic isolation.

The two German states increased Cold War tensions between the West and Russia. West Berlin was surrounded by East German territory, and East Germany proclaimed the Eastern part as its capital, a move the western powers did not recognize. East Berlin included most of the city’s historic center. The West German government established itself in Bonn. 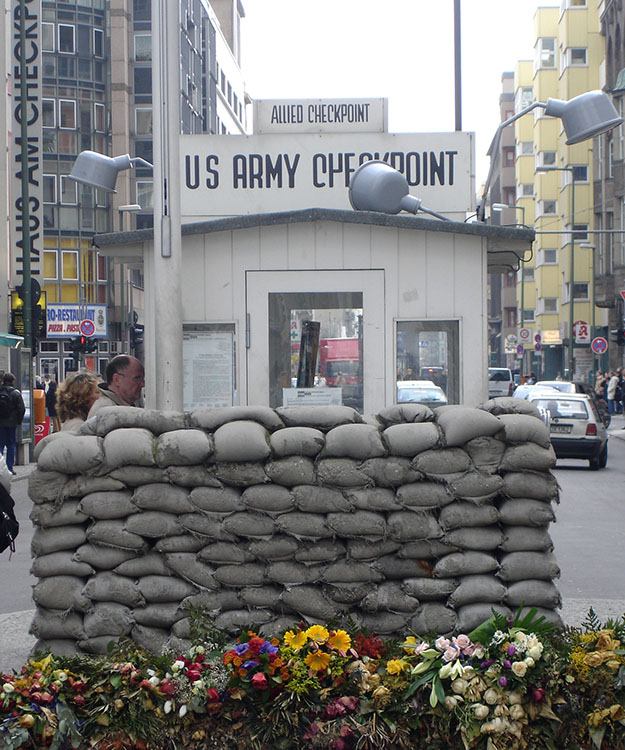 In 1971, the Berlin Agreement makes possible a number of practical arrangements benefiting the people. The Federal Republic of Germany and the GDR sign a transit agreement improving the flow of traffic on the access routes to West Berlin. The Berlin Senate and the German Democratic Republic (GDR) government signed an “arrangement concerning the improvement of travel and visitor traffic.

In 1975, the GDR federation of Protestant churches and the GDR government, reconstruction work begins on the Berlin Cathedral, heavily damaged by the war, located on the Spree island in East Berlin’s Mitte borough (completed in 1993).

In 1978, the State Library opens on the Kulturforum in West Berlin.

In 1979, the International Congress Center (ICC) opens at the trade fair grounds in West Berlin.

In 1984, West Berlin’s public transportation company BVG takes over the operation of the S-Bahn suburban railway in West Berlin.

In 1986, a bomb explodes at the West Berlin disco “La Belle” on April 5, killing two people and injuring 193 others. 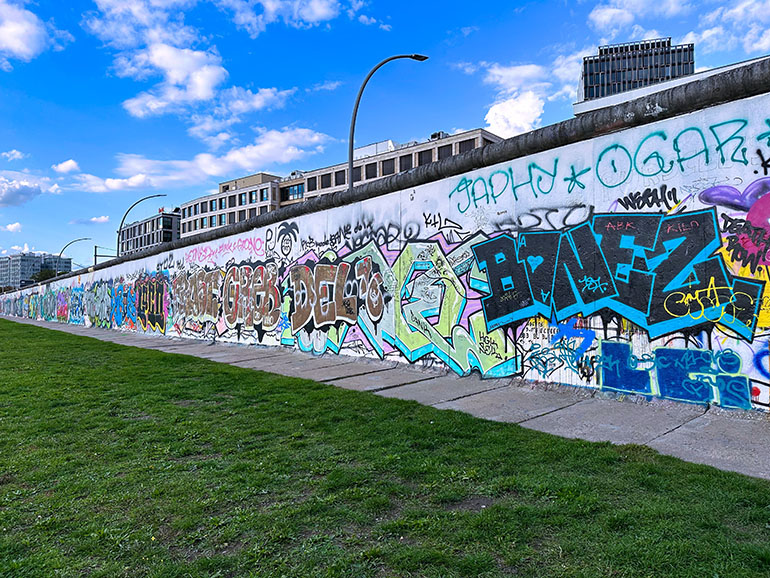 Remainder of the Berlin Wall today

In 1989, more than 500,000 East Berliners gather at Alexanderplatz for a demonstration, demanding that the nominal rights to freedom of speech, freedom of the press, and freedom of assembly be honored. The SED leadership promises that restrictions on travel to the West will be eased.

On November 9, opens the Wall in Berlin and along the German-German border. The Berlin Wall fell on 9 November and was mostly demolished. The two parts of Germany were reunified as the Federal Republic of Germany, and Berlin again became a reunified city.

On 20 June 1991, the Bundestag (German Parliament) voted to move the seat of the German capital from Bonn to Berlin, which was completed in 1999.

Nevertheless, Nazi Germany and Rebirth of a Nation is still one of the world’s most incredible nation histories.