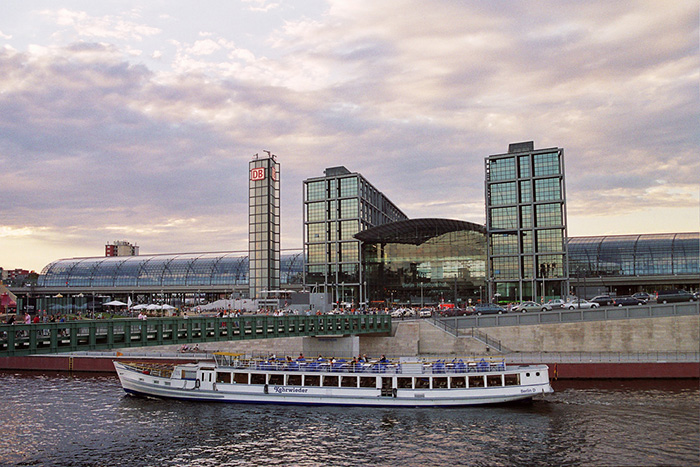 Check the luggage policy for your airline and confirm your flight 24 hours in advance. Make a copy of your passport/flight/hotel itinerary and leave it with someone at home. Pack headache and other medicines in your hand luggage. There is free WiFi through the airport. Taxis and shuttle buses await you at the Arrivals roadway.

Berlin Hauptbahnhof (Berlin Central Station) became the main railway station when it opened in 2006 on the historic site of Lehrter Bahnhof railway opened in 1871. The Berlin U-Bahn (Metrorail) connection to Brandenburger Tor, another major station opened in 2009. A new rail link to Berlin Schönefeld Airport opened in 2015. The massive Berlin Hauptbahnhof hosts 17 ICE high speed trains and 12 regional trains to all parts of Germany and the equivalent of an indoor restaurant and shops mall.

Originally opened in 1842, and rebuilt several times, Berlin Ostbahnhof was the central station from 1987 to 1998. The Berlin Wall ran only 200 meters away from the station. Today, the station has 11 tracks and 9 platforms. Though a number of ICE trains were lost to Berlin Hauptbahnhof, Ostbahnhof remains an important station.

Berlin Lichtenberg is a railway station and rapid transit station. Until 2006 when Berlin Hauptbahnhof opened, international trains to Warsaw, Kiev, Minsk, Moscow and Siberia used to stop at Berlin-Lichtenberg. Now, night trains from all parts of Germany terminate at this station, as do some trains from Warsaw and Kraków. Lichtenberg was featured in the opening scene of The Bourne Ultimatum, where it was made to look like a Moscow train station.

Germany is home to the Autobahn, the father of what we call freeways and expressways in America. U.S. Interstate Highway System were designed on the same principles as the Autobahn: high-speed, controlled access highways used for personal, commercial and military vehicles. Like Americans, Germans drive on the right side of the Autobahn. Provided weather and road conditions permit, the Autobahn has no speed limit. We recommend that you rent an Audi, Volkswagen, Volvo or BMW. You’ll have plenty of chances for that every time you hail a cab. If you’d like to drive 100-120 mph on the Autobahn, stay in the right lane unless you have to quickly pass a vehicle. Otherwise you might find a 175-200 mph sports car breathing down your back.

In Berlin, one of two Metro systems is the 94-mile U-Bahn, featuring 10 lines spreading across Berlin. U-Bahn does not have station turnstiles. Use platform machines to buy your destination ticket. When you purchase your ticket, carry it on the U-Bahn train. A conductor walks through each train car and asks for your ticket. If you forgot to buy a ticket, expect the Gestapo treatment. Actually, the conductor will give you a chance, if you look and act like a well-mannered foreign visitor.

Transit trains look that same as most transit trains in America. This should come as no surprise since Germany companies manufacture many of the world’s transit vehicles. The U-Bahn Reichstag Station was used to shoot scenes of the movies Resident Evil and Equilibrium. Since 2001, Berlin U-Bahn has hosted the annual short-film festival, Going Underground. Short films are shown on the monitors found in many U-Bahn trains. Passengers on board vote for the festival winner. How cool is that!

The S-Bahn is the second electric rapid transit system consisting of 15 lines running 206 miles to 166 stations in metro Berlin. It only carries about 75% as many passengers as the U-Bahn. Although the S-Bahn and U-Bahn have different operators and most of the S-bahn is surface, they share a unified fare system. And unlike the U-Bahn, the S-Bahn crosses the Berlin city and state border into the surrounding state of Brandenburg or Potsdam. So together, the U-Bahn and S-Bahn make a comprehensive rapid transit system transporting half as many people as the NYC Subway system.

Like Metrorail systems worldwide, prevent being targeted by pickpockets as a vulnerable tourist. If traveling alone, avoid reading paper maps or tourist books on the Underground. Instead, study the Underground map on your computer/tablet in your hotel room or at a cafe. If you have questions about the Metro, ask the concierge or English-speaking waiting and tip them. Then fold and stash away paper maps. Then after catching the Metro, a brief glance at maps in stations and on trains will not draw undue attention.