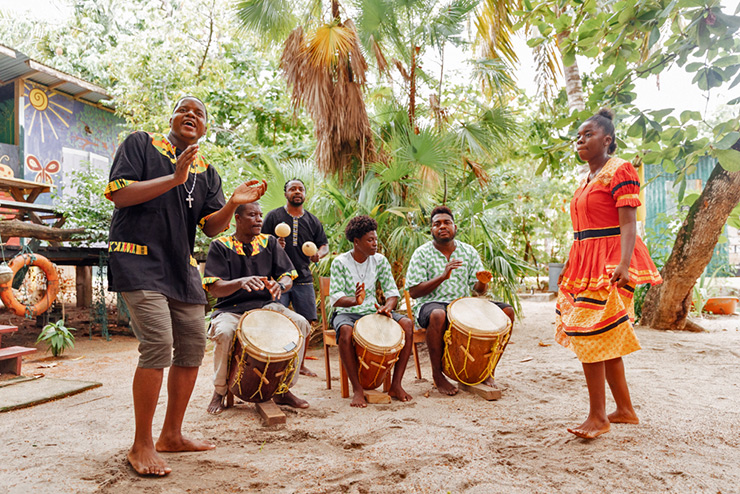 Archaeologists estimate that at their peak, 1 to 2 million Mayans lived within the borders of present day Belize. Maya cities such as Caracol, Xunantunich and Lamanai commanded the landscape, with small agricultural communities farming the land between 1000 BC to 1500 AD.

Evidence of this great civilization is apparent when visiting the Xunantunich pyramid. Ultimately however, the Mayan civilization collapsed and disappeared for reasons only partially explained today. Perhaps it was internal wars, loss of faith, deseases brought by European explorers for which they had no immunity, or a series of natural disasters that caused famine.

Christopher Columbus sailed along the coast of Central America in 1502, and named the Bay of Honduras which borders the southern part of the barrier reef. The first Euroepan settlers in Belize were English Puritans, setting up trading posts along the coast of Belize. Pirates and buccaneers established permanent bases, harassing the Spanish galleons carrying gold, silver, and hardwoods from Central America to Europe. Logging became the dominant industry.

Spain continually attempted to expel the British buccaneers from then Spanish territory, but finally signed treaties in 1763 and 1786 allowing the British to continue to harvest timber in exchange for protection against pirates preying on the Spanish galleons. Little did the Spaniards know that was a slippery slope that would lead to their loss of the area.

During the 1840’s, Great Britain declared Belize to be the colony of British Honduras. Development of Belize became more organized and multiethnic through a series of cultural changes. The European settlers began to marry freed slaves forming the Creole majority that still is dominant in the population. Mexican citizens began cultivating small farms in Northern Belize.

In Southern Belize, the Kekchi and Mopan Maya sought refuge in the hills of the Maya Mountains. A small band of Confederate Civil War veterans settled in what is now Punta Gorda.

In 1660, the British granted the Garifuna people possession of St. Vincent. But less than a decade later, the British broke this treaty and reclaimed St. Vincent, attracted by their successful fishing and farming practices. The British saw the Garifuna as a threat to their colonial mission and began to exile the nearly 5,000 Garifuna people to the island of Roatán, off the coast of Honduras. From Roatán, the Garifuna began to migrate to the mainland of Honduras and continued to spread out along the Caribbean coast to Belize, Guatemala, and Nicaragua. The first Garifuna arrived in Belize in 1802 in the town of Dangriga, which is considered to be the spiritual capital of the Belizean Garifuna people.

By 1954, voting rights were extended to all adults. By 1961, England agreed to begin the process of setting Belize free. In 1973, the colony’s name was changed from British Honduras to Belize and on 21 September 1981, Belize’s Independence was declared.

Today, the Garifuna people are a thriving population in the country of Belize. Having successfully preserved much of their cultural heritage, the Garifuna language, dance, and music were declared to be a Masterpiece of the Oral and Intangible Heritage of Humanity in 2001 by UNESCO.

Music and dance are central to the Garifuna culture, with a heavy focus on drumming. It has evolved into a modern version, called Punta Rock, which incorporates traditional drumming with modern lyrics and instruments. Dance is an integral part of the Garifuna culture, stemming from its West African origins. Popular forms of Garifuna dance include Punta, Chumba, HunguHungu, and Jankunu. Each type of dance tells a different story of the Garifuna people history.