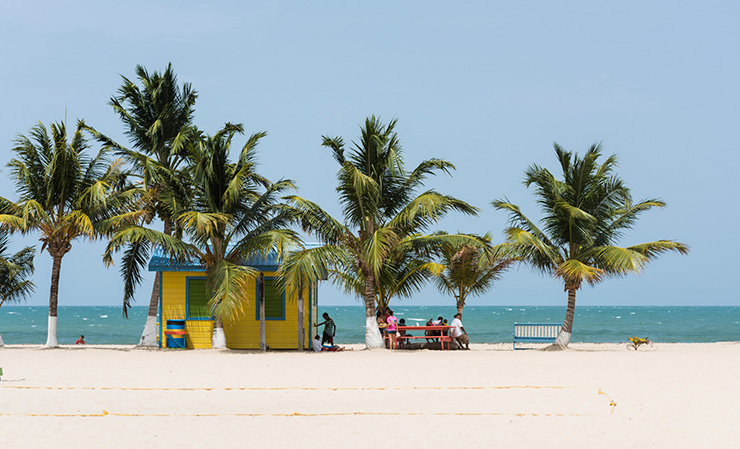 The white sand beaches of the offshore islands offer seaside restaurants, beach bars, dive shops and equipment rental in the island communities such as Ambergris Caye and Caye Caulker. Caye is pronounced “Key.”

Ambergris Caye, probably the most famous Belizean caye. Its small, vibrant town of San Pedro is a world-class headquarters for snorkeling, diving and fishing thanks to the barrier reef that runs along the island’s seaward shore. It attracts an abundance of exotic sea life — some of the best in the world. For sunbathers and snorkelers, the reef provides protection from harsh waves. That makes the beaches along Ambergris Caye’s eastern shoreline quiet and relaxing.

Palm-studded Caye Caulker, is another popular beach off Belize’s mainland. Caye Caulker is even more laid back than Ambergris Caye, yet blessed with the same picture-perfect, palm-strees shading its beaches and pristine turquoise water. Since Caye Caulker has managed to avoid over-development to a great degree, it’s a better choice for renting a beach bungalow.

Laughing Bird Caye National Park is one of the gems in a string of pearls that is the Belize Barrier Reef World Heritage Site. It is situated on the western side of the Victoria Channel, only 11 miles off the coast from Placencia Village. The Caye gets its name from the Laughing Gull. This bird once used to breed on the Caye, but because of growing human presence, the colonies have moved to nearby undisturbed cayes for breeding. Brown Pelican, Green Heron, Melodious Blackbird and many other birds from the surrounding cayes and strays from the mainland come here too. Due to the uniqueness of the Caye, the Faro and diverse marine habitats and life, the Caye was declared a protected area the Belize National Parks System Act. Its a wonderful place to sunbathe and snorkel.

If you like beaches less traveled, rent a small boat and travel to any of hundreds of small cayes scattered across off Belize’s shore. Hollywood has taken notice of these small cayes, making them a character in many movies. Before you get too excited about discovering your own paradise, note that many are privately owned or have a single or few resorts, so advance notice of your arrival is often needed so that you can be accommodated. Only a few of these islands, primarily in southern Belize are directly atop the Barrier reef with snorkeling right off the beach. Mangrove forests are also common along the coastline and live in shallow salt water. The mangrove forests provide shelter and feeding areas for many species of fish, birds, reptiles, amphibians, and mammals. They also stabilize the shores and protect them from erosion. Most of the cayes would be smaller or non-existent, if not for the mangroves.

Placencia is a small village at the tip of the peninsula. Unlike Caye Caulker and Ambergris Caye up north, Placencia has excellent beaches and few residents. The “main street” is a sidewalk. Small hotels and guesthouses near the beach are cheap and locally owned. Plenty of small dive companies allow you to book half-day to multi-day diving and snorleing trips. The barrier reef stretching down the coast enables first rate diving and snorkeling. 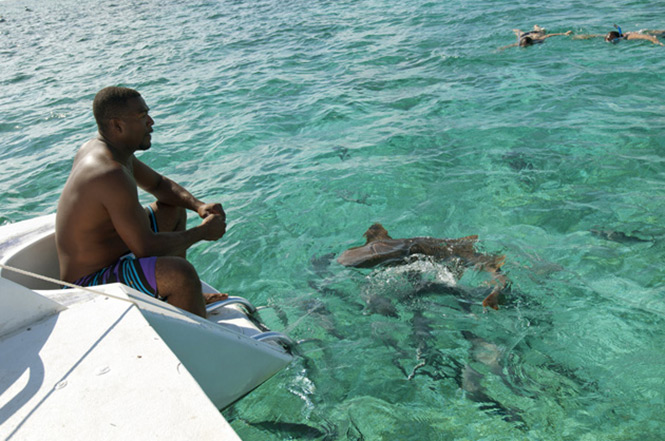 Also on the mainland, the communities of Belize City, Hopkins and Dangriga offer quiet beaches with food and drinks, and limited marine sport services just a block or two from the beach. Like other Western Caribbean destinations, Belize City offers day trips for vacation-only fishers and lenghty excursions for anglers. There is an abundance of great fishing spots to be enjoyed year round and no shortage of qualified fishing guides in Belize.