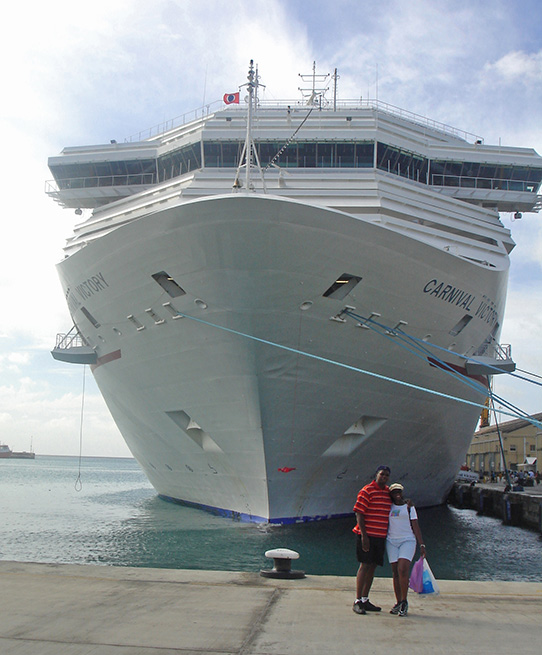 Located in Christ Church District, the airport has a museum where you can explore inside a British Airways supersonic plane. That lets you experience the luxury of historic Concorde flights, without the 1400 mph speed of course.

Roadways
As a former British colony, Barbados was heavily influenced by the English culture, customs and transportation infrastructure. Like United Kingdom rules of the road, people in Barbados drive on the left side.

Barbados is 21 miles long and 14 miles wide and has 990 miles of public roads. Barbados highway system radiates from Bridgetown. H1 signifies the first highway that runs north. The numbering continues sequentially in a clockwise direction. The most popular highway throughout the island is the A. B. C. Highway (Adams/Barrow/Cummins).

The most prominent traffic junctions on Barbados roadways are the two lane roundabouts in Bridgetown. Vehicles in the inner most lane of the roundabout have the right of way. The speed limit on regular roads is 37 mph, unless otherwise posted. The speed limit on the ABC Highway and the Spring Garden Highway is 50 mph.

ZR Vans
The ZRs (pronounced “Zed-Rs”), are privately owned mini-vans that run on predetermined routes. They are recognized by their white exterior and maroon stripe down the side. ZRs are independently owned but have a fixed fare around 2 dollars/person for one way. ZRs are both reliable and often provide entertainment to patrons. They are also slow because they stop frequently to pick up the maximum number of passengers. Therefore ZRs have a reputation for loud music and cramped spacing. But if you’re on vacation, enjoy mingling with locals on their terms.

Taxis
Similar to the United States, taxis provide transportation at a predetermined rate per mile. The driver should tell you the cost when entering. If you miss one, don’t worry. There are plenty on the small island.

Public buses run on exact fare system and are unable to give change. Don’t leave your hotel without extra cash in small denominations.

There are also privately operated Minibuses that are yellow with a blue stripe. They operate mainly on the west and south coastline. The most popular routes are Bridgetown–Speightstown and Bridgetown–Sam Lord’s Castle. They charge about $2.50 and do provide change.

Car Rental
For Americans comfortable driving on the opposite side of the road, car rental is provided through rental agencies. They offer a variety of vehicles ranging from small open-top cars to luxury cars to vans. Foreign drivers must purchase a temporary driver’s license present a valid international driving licence.

Boating
Boating to and from Barbados requires following all International and local laws. If arriving in Barbados it is important to remember that you must enter an approved port of entry, which means stopping by the Harbour-master first at Bridgetown. National law protects the coral reefs. Consequently, eco-friendly boaters should not drop anchor outside of areas approved by Barbados government in order to protect the corals and island marine life that depend on them.