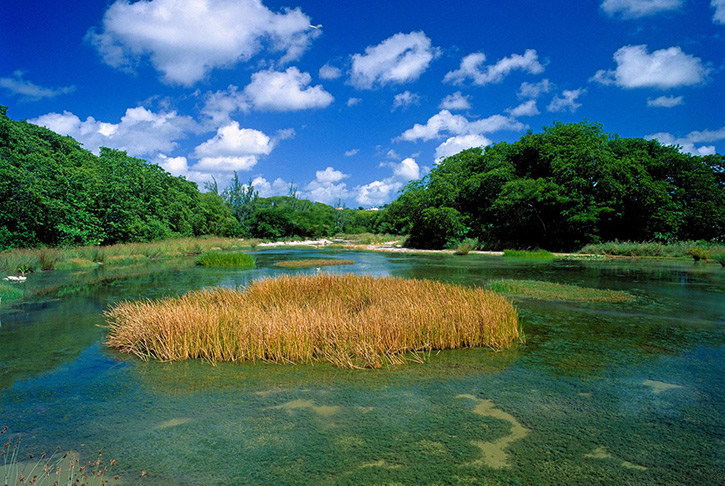 Barbados is the easternmost island of the Lesser Antilles. At 104 miles east of St. Vincent and the Grenadines and 250 miles northeast of Trinidad and Tobago, technically, its an Atlantic Island. But for marketing purposes, Barbados is treated as a Caribbean Island. Given the wide selection of villas located near the beach, snowbirds often Winter here. More importantly, transplants and travel agents know that Barbados is outside of the principal Atlantic Hurricane Belt. It rarely gets hammered.

Geologically unique, Barbados was created by the collision of the Atlantic and Caribbean plates along with a volcanic eruption less than one million years ago. The intersection of two plates creates a lot of coral reefs formation above sediment, circling much of the island. Just below the waterline, sediment slopes downwards in terraces to the west and takes a steeper decline in the east. At 166 square miles, the island of Barbados is slightly bigger than the City of Philadelphia.

Barbados rises gently from the sea to 1,120 feet on Mount Hillaby in the central region. Villas in the Scotland Highland district of the central region often have 180 degree views of the island. The erosion of limestone rock in the North East part of the island has formed caves and gullies, that are popular tourist attractions like Harrison’s Cave and Welchman Hall Gully. Limestone erosion has created interesting landforms and blowholes on the Atlantic Coast side of the island. Don’t forget to bring a real camera for more memorable photos.

The island’s tropical climate averages between 75 degrees and 85 degrees year round. As a result, the dress code is always Island Casual. There is no single best week or month to travel here. But to avoid crowds and high prices, May to November is off-season. The Wet Season runs from June to November and draws most of the 40 to 90 inches per year. The Dry Season runs from December to May. From December to May, average temperatures range from 70 to 88 °F), while between June to November averages 73 to 88 °F. Gentle 8–10 mph breezes are common throughout the year.

Barbados has higher population density than most Caribbean Islands, thereby creating a bigger challenge for the government to ensure that underground aquifers and coral areas remain clean and protected. Environmental protection efforts are particularly important to one of the largest sea turtle nesting areas in the Caribbean. If you rent a dune buggy on the beach, try to avoid turtle nests partially buried in the sand. Turtles will thank you.