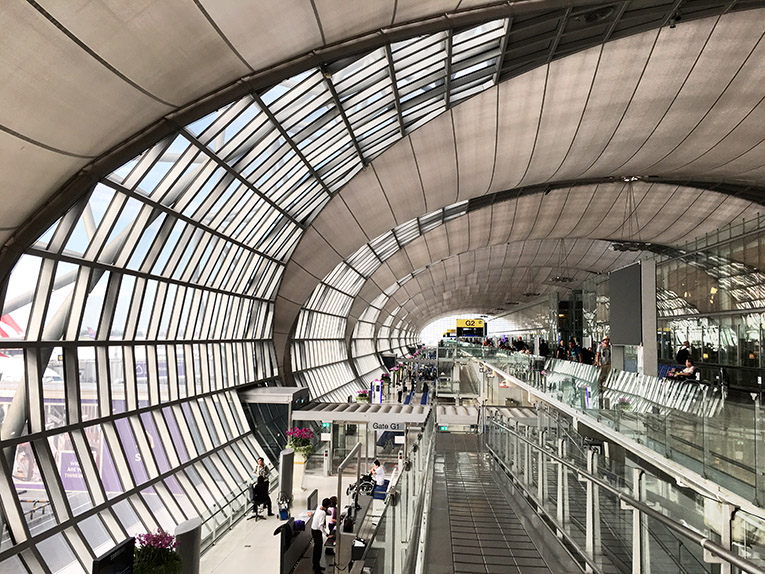 Don Muang Airport is the smaller airport commonly used for regional flights in Thailand and shorter flights to Southeast Asia via AirAsia.

Before you fly, check the luggage policy for your airline and confirm your flight 24 hours in advance. Make a copy of your passport/flight itinerary/hotel reservations and leave it with someone at home. Pack headache and other medicines in your hand luggage. Bangkok is a long flight from Los Angeles. Fortunately, Boeing 787 and Airbus A350 jets can make the flight in 19 hours with one-stop.

Here is the weblink to Airport Link a Rapid Transit line to central Bangkok, Airport Link Line. If you’re on a tight budget, consider the bus. Every hour between 5.00 am-Midnight, one bus departs both airports. Departure from Suvarnabhumi: Gate 3 outside the arrivals hall. Departure from Don Muang: outside the arrivals hall. These buses are free of charge but may require flight booking.

Taxis are fairly cheap, but traffic gridlock is common. Nevertheless, taxis are the easiest way to get from Bangkok’s Airport (BKK) to downtown with large luggage. There’s a 1.25 baht surcharge if the driver is stuck in traffic. Without traffic, the first half-mile (2 km) costs 35 baht (a little over $1), with prices increasing by 2 baht/km traveled thereafter. Avoid taxis that don’t have meters to protect yourself from scams. Note the 5 km is a little over 3 miles.

The ride-hailing app, Uber, also operates in Bangkok and the Airport Rail Link is another good option, though it gets stuck in traffic too.

Avis, Budget and Thai Rent-a-Car are available at Suvarnabhumi International Airport. This option is only recommended for experienced drivers in Thailand or Southeast Asia.

Commuter trains terminate at Bangkok Railway Station Hua Lamphong. The MRT Subway line also accesses the railway station. This is useful to know if you plan to visit other regions of Bangkok.

The frequency of departures is 1 to 2 trains per hour. Delays are frequent. From Bangkok Airport Don Muang to Bangkok Railway Station Hua Lamphong, select the “English” language option on this Timetable & Fare information from state railways of Thailand.

Thailand plans to build a High-Speed Rail System anchored by Bangkok Railway Station. Though funding is uncertain at this time, the first 155-186 mph (250-300 kmph) line is anticipated by decade-end. The ultimate goal is to connect Bangkok with resort cities like Pattaya and Hua Hin, along with Chiang Mai, Laos, and Malaysia. 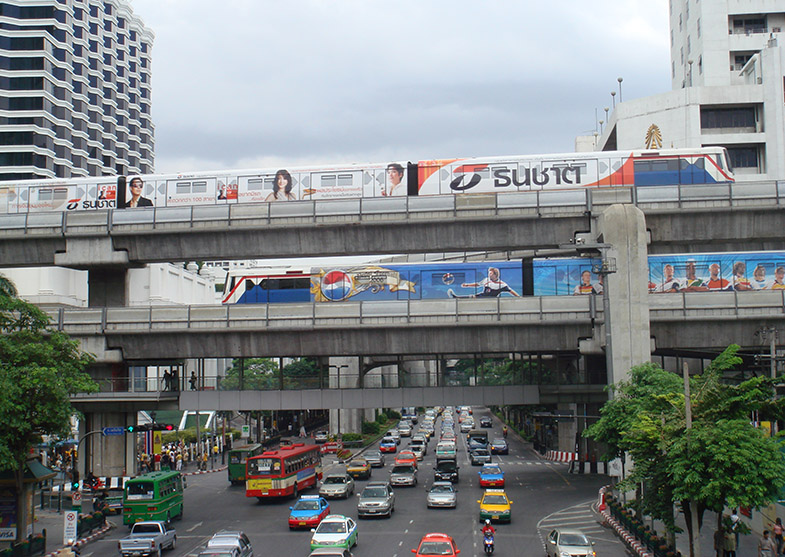 BTS Skytrain and Metro Rail (MRT) subway systems are modern, fast, affordable, and easy to navigate. Many visitors find the Skytrain and MRT to be the most convenient way of traversing the city, but it’s not as extensive as the bus system. Here is a map of Bangkok’s expanding Skytrain, MRT and Regional Rail lines crossing the metropolis.

The MRT canvasses a smaller section of the city. The MRT has its own rates that are similar in price to Skytrain. Signs in both transit systems are in English and you can purchase tickets at automated machines in the station or from ticket offices. The MRT system operates from 5:30 a.m. until midnight depending on your route. Hours and fares for the Airport Rail Link from Suvarnabhumi Airport are similar to the trains. For a scenic view of the city, we suggest hopping aboard a riverboat and floating down the Chao Phraya River.

Use this helpful trip planning tool at https://www.transitbangkok.com.

Bangkok Mass Transit Authority runs an extensive network of buses throughout the city. But these are prone to traffic jams, for which the city is notorious. Buses with air-conditioning cost more to ride than those without, but the extra cost is worth it. Tickets range from 6.50 baht (US$0.20) to 23 baht (US$0.60). Tickets are purchased on the bus.

Most buses run from 5 am to 11 pm, although some run 24 hours a day. Bus stop signs are blue. Note that buses don’t stop, unless you flag them down.

If you have a flexible schedule, it is advised that you avoid riding the bus during rush hours. A crowded bus stuck in traffic is not a tourist’s best way to spend few hours. 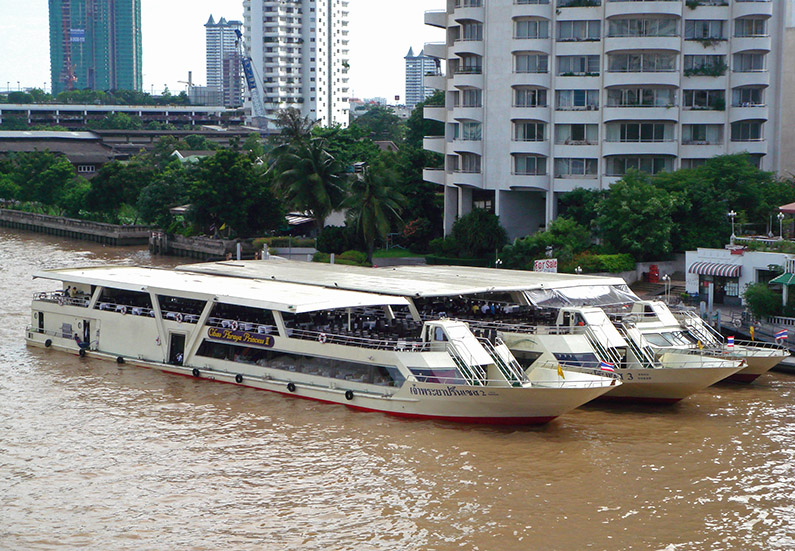 These riverboats also serve as a great way to get around some of the city’s major sites since there are stops near Wat Arun. Depending on your route, you can get a ride between 10 and 32 baht ($0.30 and $1). Consider taking a roundtrip on Chao Phraya Express Boat, if you’d like to get places faster.

Bangkok Transportation is in many ways part ofthe city’s culture. Hectic, energetic and a tad unpredictable. If you feel adventurous, try the tuk-tuks, songthaews along the riverfront and khlong boats along the canals.