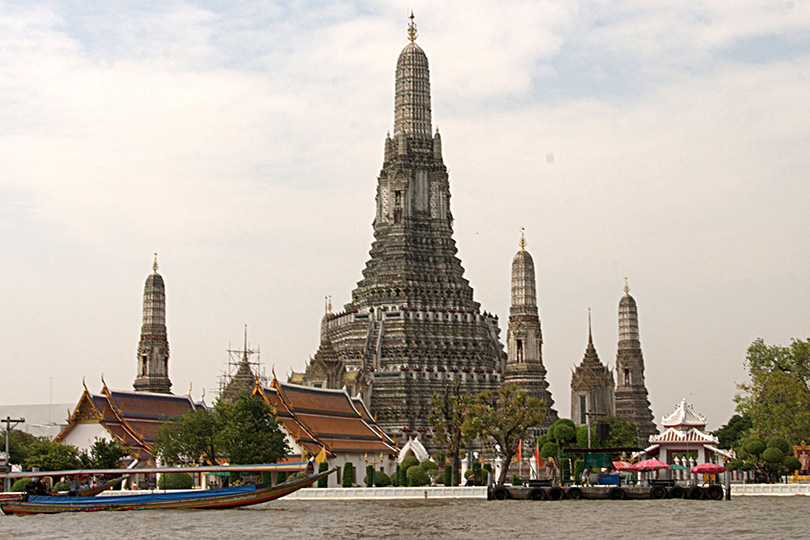 Bangkok became the capital of Siam, as Thailand was previously known, in 1782, when General Chao Phraya Chakkri, assumed the throne as Rama I. As founder of the ruling Chakkri dynasty, he moved the court from the west to the east bank of the Chao Phraya River.

King Rama I modeled the new city on the former capital, Ayutthaya, 40 miles (64 km) to the north. The walled Grand Palace complex and the temple Wat Pho were completed. A new city wall, perhaps the most imposing structure, skirted the river and Khlong Ong Ang to the east. The area enclosed amounted to 1.5 square miles or 4 square km.

More wats were built during the reigns of Rama II (1809–24) and Rama III (1824–51). They served as schools, libraries, hospitals, and recreation areas, as well as religious centers. During these years Wat Arun, Wat Yan Nawa, and Wat Bowon Niwet were completed. Wat Pho was enlarged, and Wat Sutat was begun. The river and the network of canals served as roadways.

Rama IV (1851–68) developed the city while continuing, at a reduced rate, the traditional building of wats. A number of substantial housing units were constructed for the royal family. New streets were opened. The number of floating houses along the riverfront was reduced.

During the long reign of Rama V, King Chulalongkorn (1868–1910), the city was transformed through a program of public works. The great Chakkri Building in the Grand Palace was completed by 1880. The Dusit Palace and an ancillary garden city were later built beyond the wall, being connected to the Grand Palace by the European-inspired Ratchadamnoen Nok Road.

King Chulalongkorn, an early automobile enthusiast, started a roadway- and bridge-building program. Parts of the city wall were demolished to build roadways, though temples were preserved.

In 1882, the completion of Wat Phra Kaeo royal temple, which housed the Emerald Buddha, also signaled many new social reforms. In the 1880s-90s, an electric tram service, railway, and telegraph services opened. The marble temple of Wat Benchamabopit (1900), elegant bridges built in the French style, and the Italian-inspired National Assembly Hall (Throne Hall) were built.

Rama VI (1910–25) continued the program of public works by establishing Chulalongkorn University in 1916. He built a system of locks to control the level of waterways throughout the city. That prevented flooding. He gave the public its first and largest recreational area, Lumphini Park. It includes a scenic lake.

During Rama VII’s reign (1925–35) municipal areas were reorganized and decentralized for better service in the growing city. In 1937, Bangkok was divided into the municipalities of Krung Thep and Thon Buri. At the time of their establishment, the two municipalities, approximately equal in area, together covered about 37 square miles (96 square km); about four-fifths of the city’s population lived in Krung Thep.

Since World War II Bangkok has grown with unprecedented rapidity, which caused problems with transportation, communication, housing, water supply, drainage, and pollution. Tourism rose in importance during the 1964-74 Vietnam War, the city became a popular destination for U.S. military personnel. That is when most African American soldiers discovered Bangkok while on Short Leave.

Bangkok History reached the public consciousness of most Americans in 1956 when”The King and I” movie starring Yul Brynner became a box-office and critical success.

By the 1980s, nightclubs and the tourist sex trade—as well as crime and sexually transmitted diseases—were flourishing. Although prostitution is formally illegal and the number of prostitutes per capita is lower in Thailand than in some other Asian countries, the city’s commercial sex industry employs an estimated 100,000 people and is popular among foreign tourists. To combat underage prostitution, the government increased penalties for patrons and brothels during the 1990s.

In the 2000s, the city ramped up construction of its Skytrain and MRT subway system to combat its notorious traffic congestion.

Bangkok History has built the infrastructure for the city’s economic boom and its role as one of Asia’s most important tourist, financial, and commercial centres with cosmopolitan image.