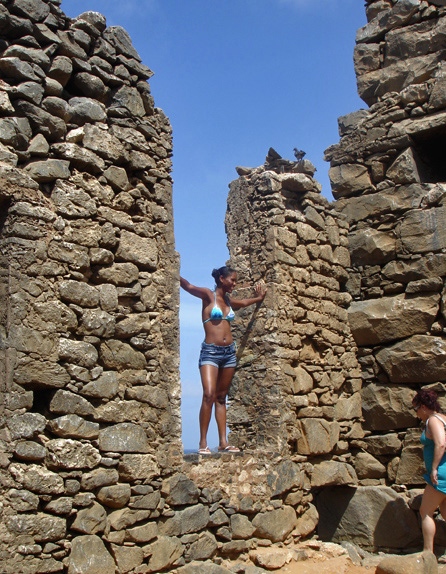 The complex racial make-up, languages, and friendly disposition of the people are the result of a richly textured colonial past. Giving props to the first arrivals to this beautiful island, an Arawak tribe from South America arrived around 1000 A.D. They migrated here from Venezuela to escape attacks by the Caribs. Testament of their arrival is documented in the ancient painted symbols still visible on limestone caves found at Fontein, Ayo, and other pockets of the island. Aruba’s Museum of Archaeology has a fine collection of its artifacts.

Due to Aruba’s distant location from other Caribbean islands and strong currents in the sea which made canoe travel to the other islands difficult, the Arawak remained more tied to South America than the Caribbean.

In 1636, Aruba was acquired by the Netherlands and remained under their control for nearly two centuries. Given the European colonist mentality of those times, the Spanish exported the Arawak Indians to Santo Domingo in the Dominican Republic to work in the copper mines. Copper had a great many uses during those times, particularly in wars.

Near the end of the Eighty Years’ War between Spain and Holland, the Dutch began their long-tenured control over Aruba.

In 1796, the town that was later named Oranjestad was founded and became the island’s capital. Then in 1805, during the Napoleonic Wars dominating Europe and the Atlantic Ocean, the British briefly took possession of Aruba. Their control would not last long, as the Dutch regained control in 1816.

In 1824, a gold rush brought many fortune seekers that have left gold mine ruins today. Those riches were followed by black gold — by first the opening of a crude oil transshipment facility in 1924 and then in 1928 with the opening of an oil refinery.

The refineries were owned by Standard Oil of New Jersey followed shortly by a small Royal Dutch Shell refinery. After Aruba’s refinery closed in 1985, the last decades of the century would produce a boom in the tourism industry. In 1986, Aruba seceded from the Netherlands Antilles and became a separate, autonomous member of the Kingdom of the Netherlands.

With a stable government, great public infrastructure, beautiful Caribbean beaches, natural parks, and restaurant assets, Aruba made a fast shift to tourism. It didn’t hurt that they approved casinos. As a result today, Arubans enjoy low unemployment and crime rates. Like many other Caribbean nations, they now elect their own public officials for governance.

The legacy of Aruba’s past is easily appreciated by sauntering through city streets, that feature Dutch colonial houses next to contemporary architecture. The cuisine reflects a mix Indian, Dutch and African –and that’s a good thing.