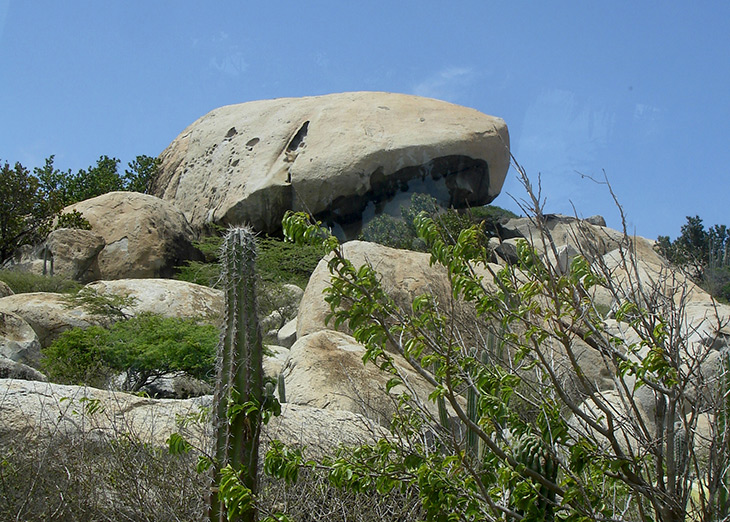 Though Aruba is the smallest of the ABC islands (Aruba, Bonaire and Curacao), one of the island’s charms is its size, at just under 20 miles long and 6 miles across. That makes its natural wonders easy to explore without getting lost.

The topography is diverse and unusual for an island surrounded by the Caribbean Sea. Miles of pristine white beaches that rank among the most beautiful in the Caribbean, calm blue seas, and visibility in some areas as deep as 100 feet are found on the southwest coasts.

In stark contrast, the northeast coast is rugged with dramatic volcanic rock formations. Striking a midground, the interior resembles a desert with a large variety of cacti everywhere. Then all around the island, you will find Aruba’s trademark Divi Divi trees, bowing to the southwest due to tradewind direction. The official island tree, Divi Divi appears in many Aruba photographs or ads.

Try spelunking (cave exploration) and take pictures of the bats in Guadiriki cave. see Arawak drawings on the ceiling of the nearby Fontein cave. Most of all, remember to rent helmets and flashlights when venturing underground.

Diving allows visitors to explore some of the fascinating wrecks that reside off of Aruba’s shores. Or, stay on dry land and take an off-road safari around the island. Renting a 4-wheel drive vehicle is the best method for sightseeing, but horseback riding is also an option.

Unique natural attractions can be found all over the island, from bird and butterfly sanctuaries, desert cacti, a donkey preserve, friendly iguanas, and more. The most recognized and photographed attraction in Aruba was the Natural Bridge. The Caribbean’s highest and most dramatic coral structure was carved by the action of the pounding waves on the rugged northern seaside over the last 200 years.

The arch measured over 100 feet long and stood 20-plus feet above sea level until it collapsed in 2005. Fear not, there is a baby natural bridge next to it worth seeing and the equally stunning natural pool is not far away.

The Casibari and Ayo Rock Formations are massive, uniquely shaped geological rock formations scientists believe to be the result of volcanic activity.

Arikok National Park, which encompasses 25% of the island, is a natural preserve and one of Aruba’s true natural treasures. Featuring some of the oldest Arawak Indian drawings and numerous trails, the park also showcases Aruba’s great variety of plants, tropical flowers and trees like the Divi Divi and Kwihi Trees, rare and exotic cacti, and aloe, and a wide variety of birds and iguanas are great Aruba Eco-Travel ideas for your itinerary.