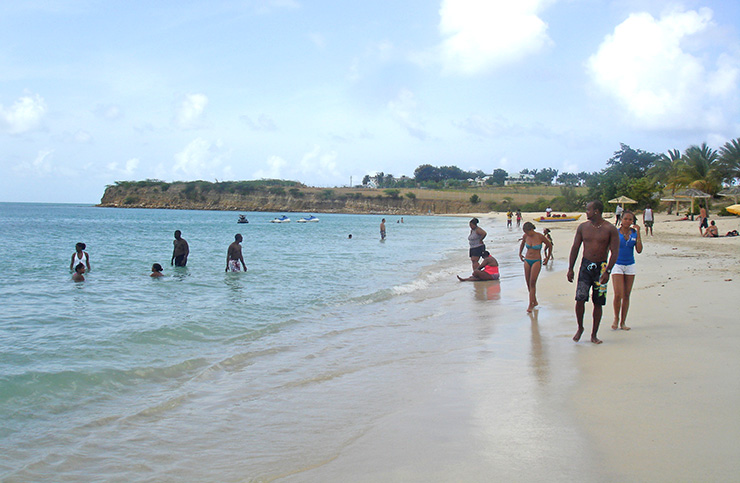 Locals enjoying a beach in Antigua; (c) Soul Of America

Many Antigua Beaches rest inside the calm, protected waters on the Caribbean Sea. All of the island’s beaches are open to the public.

Northwest Coast
The island’s developed northwest coast is home to the popular Runaway Bay, which provides a wide variety of resort beach experiences. For those who also want to party near the beach, popular evening hotspots can be found at Dickenson Bay. Kitesurfing sessions can be booked at Jabberwock beach with Kitesurf Antigua; http://www.kitesurfantigua.com

For those who want a beach close to the capital city of St. John’s, Fort James is a popular public beach frequented by locals. Deep Bay is also excellent choice. The series of four crescent-shaped beaches at Hawksbill are highly regarded, one of which is great for nude sunbathing.

Southwest
The beaches of the hilly southwest corner of Antigua are generally less developed than those around St. John’s. Winding along the coast are Ffryes Bay, Darkwood Beach and Johnson’s Point.

Splash Waterpark Antigua
A sea water fun park located on the southwest coast on the popular Darkwood Beach has many fantasy obstacle-style features. Splash Antigua is staffed by a team of certified lifeguards ensuring all users’ safety; http://www.facebook.com/Swash-Water-Park

South Coast
Rendezvous Bay and Doigs Beach on the central southern coast are quiet beaches, as they are only accessible by four-wheel drive or footpaths. After a hot day at Nelson’s Dockyard, Pigeon Point is a great stop for a cooling dip or a refreshing drink at a beach bar. Another popular spot for drinks and dining is Turners Beach Bar and Grill at Johnson’s Point in St. Mary’s.

East Coast
Half Moon Bay, voted one of the world’s ultimate beaches and now a National Park is always a great choice. Long Bay, on the easternmost point of the island, is another good choice for families, as it is completely protected by its reef. Nonsuch Bay resort offers outstanding conditions for kitesurfing. Sessions can be booked at the hotel with 40Knots. http://40knots.info/

Situated at the extreme eastern point of the island, on the road to Long Bay, is Indian Town. Over the centuries, powerful Atlantic breakers have swept in from a 3,000-mile journey from Africa, carving out a natural limestone arch called Devil’s Bridge. The blowholes and spouting surf make it a spectacular site to enjoy and photograph.

Beaches of Barbuda
The best-kept secret of the Caribbean is the smooth coastline edged with alternating pink and white sand beaches protected by barrier reefs on the island of Barbuda. Nearly deserted beaches combine with an environment rich in marine life offering those who venture over from Antigua the opportunity to enjoy excellent diving, snorkeling, fishing, bird watching, and of course, an escape from the everyday.

Though most of Barbuda’s beaches are composed of fine white sand, a few have striking pink sand beaches created from the tiniest of pink shells washed ashore in various coves.