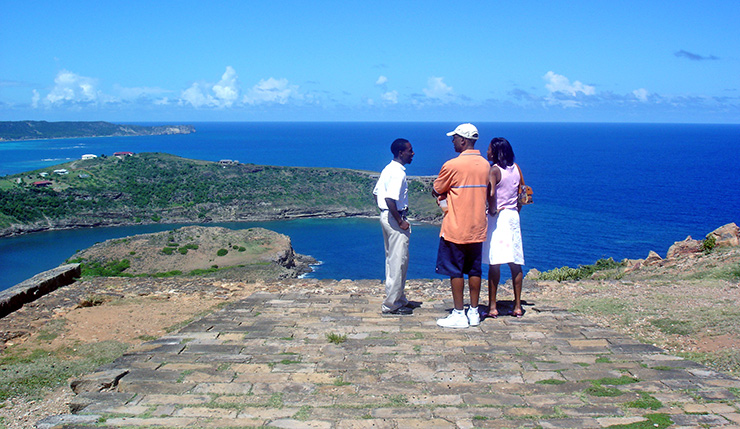 View of English Harbour from Shirley Heights in Antigua; (c) Soul Of America

From the capital city of St. John’s or Shirley Heights, Antigua exploration offers a wealth of attractions for visitors. With its relatively flat landscape, attractions are no further than a 45-minute taxi ride.

Shirley’s Heights, English Harbour
An array of gun emplacements and military buildings is best known today for the breathtaking views that it offers. From the Heights, one can look far out over English Harbour, and on Sunday afternoons the view is accompanied by the sounds of steel bands, soca, and reggae music. The site is named for General Shirley, Governor of the Leeward Islands when the area was fortified in the late eighteenth century.

Nelson’s Dockyard
An English Harbour and UNESCO’s World Heritage Site is the only remaining example of a Georgian fort and perhaps the most renowned landmark in Antigua. The Dockyard, houses a museum, bakery, and gift shop, while the surrounding area of English Harbour is filled with a variety of quaint restaurants, lively bars, and marinas.

Nelson’s Dockyard Museum
Its laid out within the Naval Clerk’s House in the Centre of Nelson’s Dockyard, highlighting its history and serving as a center for archaeological environmental, and historical research in Antigua. There is a gift shop in the museum stocked with interesting items relevant to Dockyard and Antigua’s history and there is a research library that holds books on the navy and old accounts of Antigua. There is also an archaeological library available to researchers.

Fort Berkeley
From (1704-1850), its one of two forts that were placed on the peninsula forming the entrance to English Harbour and the Nelson’s Dockyard. It was started 21 years before the Dockyard was built. Its defenses were later extended in the 1740s with the placing of 27 cannons along the fort.

Clarence House
This Georgian country house was built as a residence for Prince William Henry. He later became the Duke of Clarence and from 1830 King William IV of England. It was also home to the past governor generals of Antigua & Barbuda, and with restoration completed in 2017, it’s now a museum and event venue.

Fort George, Monk’s Hill
From 1689-1850, this destination is situated on a table hill (588 feet) behind the village of Falmouth. In 1689, the English settlers established a large fort here that defended Antigua’s first town and harbor in case of invasion by the French.

Fort Barrington
From 1779-1850, its giant semi-circular gun emplacement dominates the approach to St. John’s Harbour. It is placed upon a hill on the harbor’s south side. The lower interior is interesting to explore, for found there are dungeon-like rooms and a powder magazine. The ruin is also worth a hike for the magnificent view.

Fort James
From 1706-1850, this military heritage site is perhaps the most spectacular in Antigua as it still has its full complement of canons in place. The guns in all other forts were all sold for scrap in 1869. When St. John’s became larger than Falmouth and Parham about 1703, the northern entrance of St. John’s Harbour was fortified. The foundation stone for the present fort was laid with full Masonic honors in 1739. This inscribed stone may still be seen on the easterly corner. Much later, the inscription on this stone was nearly obliterated by some mischievous treasure-hunters, who hoped to find coins behind it.

Betty’s Hope
The first large sugar plantation on Antigua, slavery produced its commercial success that led to the island’s rapid development of large-scale sugar production. The twin towers at Betty’s Hope are the only twin towers on the island, which has about a hundred stone windmill towers dotting the landscape. These two restored examples at Betty’s Hope provide a dramatic sense of the way these mills must have dominated the island during the hundreds of years that sugar production was the dominant industry. Betty’s Hope was built by Sir Christopher Codrington, who came to Antigua in 1674 from Barbados and was named after his daughter. It has been developed as an open-air museum and visitor center.

Devil’s Bridge
Located at the eastern tip of the island in Indian Town National Park, where Atlantic breakers have carved out a natural limestone arch. Devil’s Bridge, offers one of the most spectacular sights on the island. At high tide, the rougher waves of the Atlantic force enormous geysers of water through boreholes in the rocks near the bridge. Guided tours of the site are available.

St. John’s Anglican Cathedral
Visible from around the capital, this church is regarded as one of Antigua’s national monuments. St. John’s Cathedral is dominated by twin towers at the west end that provides a baroque architectural flavor. At the southern main entrance are two figure statues, one of St. John the Baptist and the other of St. John the Divine. These statues were salvaged off of a French galleon destined for Martinique.

Museum of Antigua and Barbuda
Opened in 1985 in the old St John’s Courthouse, the museum holds exhibits that tell Antigua’s story from geological origins to political independence. It’s operated by the Historical and Archaeological Society dedicated to preserving and expressing the island’s heritage and welcomes the input of all those interested in doing so.

Victoria Park Botanical Gardens
Located in Victoria Park at the top of St. John’s, it borders Queen Elizabeth Highway and Independence Avenue. The original Garden was created in 1893, and its 8-acre site became the only real park in St. John’s. As you enter the historic garden, you are captivated by the majestic open space for family get-togethers.

Let’s Paint Antigua
A new type of social activity designed to bring out one’s hidden creativity whilst socializing with friends and family. The concept of Let’s Paint is very unique to the islands. It is also an opportunity for local artists to share their passion and for bar and restaurant owners to get the opportunity to further connect with their community, and creative-minded employees who love what they do; http://www.letspaintantigua.com

Dow’s Hill Interpretation Centre
The center provides an educational alternative for the whole family and is the only one of its kind in the Caribbean. The audio-visual presentations at the center are geared towards children, taking them through various phases of Antigua’s history with the parents sure to learn a thing or two also! Continue on to the only working Georgian dockyard in the world at Nelson’s Dockyard National Park with a museum, nature trails, and a sight-and-sound show that presents Antigua & Barbuda’s detailed history; http://www.nationalparksantigua.com

Green Castle Hill
Situated between the villages of Jennings and Emanuel, about 3 miles south of St. John’s, this rounded grassy hill stands 565 feet above sea level. It’s the remains of an isolated volcano. The area with its unusual stone works is also considered the Stonehenge of the Caribbean. At the very top of the Green Castle hill, visitors will find the ashes of Leeward Islands Governor, Baldwin Spencer, who requested to be buried there.

Gunthorpes Sugar Factory
From 1904-1972, the remains of this sugar factory are an important part of Antigua’s history. Before the 21st century, all sugar mills were owned by individual planters scattered over the island. Then when sugar cane output began to fail a central factory was built at Gunthorpes Estate in 1904.

Cricket
Antiguans and Barbudans are cricket lovers and the country has produced four of the greatest West Indies Test cricket players. The famous Antigua Recreation Grounds, The Sir Vivian Cricket Stadium, and the Coolidge Cricket Grounds are three of the finest places in the Caribbean to take in a local, regional, or international match. At the Antigua and Barbuda Museum look for the infamous cricket bat of Sir Vivian Richards, native Antiguan, former captain of the West Indies Cricket Team, and one of the greatest batsmen of all time. Cricket matches are played throughout the island during the Cricket season which runs from January – July.

Culinary Adventures
For those hoping to whip up their own island specialties, Nicole’s Table offers Caribbean “twist” cooking classes, with personal Chef Nicole providing a true Antiguan experience from her own home. Small classes create a friendly atmosphere with everyone participating in the preparation of meals, then enjoying meals outdoors, overlooking the Caribbean Sea; http://www.nicolestable.com