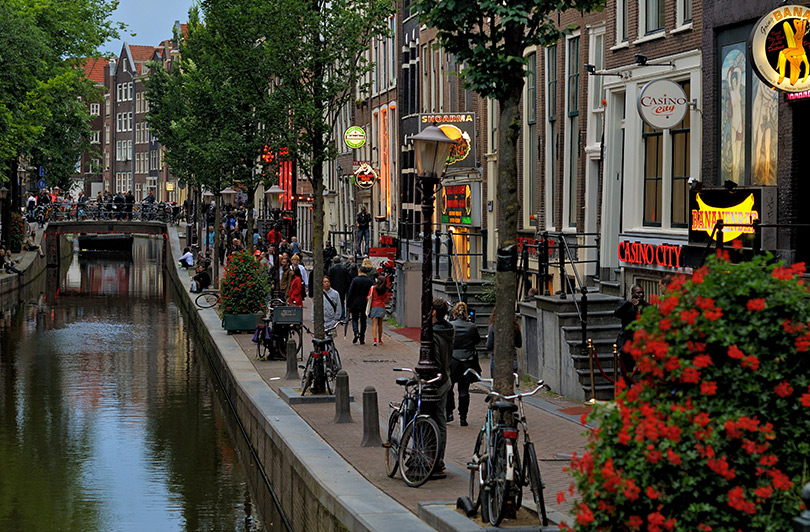 Amsterdam, Holland’s capital, is known for its concentric tolerance, tulips, canal rings and the leisure boats that ply them. Visit its many museums, cycle through the bulb fields, sail the Dutch waterways, sleep in its castles and hotels, use its airport as your gateway to Europe.

The Netherlands has always been known as a tolerant country that welcomed the Portuguese Jews, the French Huguenots, and the Flemish Protestants when these were suppressed in their respective countries. The refugees contributed greatly to the economic development of Holland which prospered in the 17th century.

More than half of the Netherlands is located approximately 19 feet below sea level. More than 20% of the land has been reclaimed from the sea and turned into polders. The polders were first created through the use of drainage mills, which were invented in 1414. While the watermills and windmills were introduced to Holland via the Middle East Crusades, Holland is unique in the diversity of mills it uses.

By 1450, many of the 10,000 watermills and windmills, dotting the landscape were located along the Southwest coast of Holland. The industrial revolution saw an end to the usage of the mills, with only 900 mills remaining today. 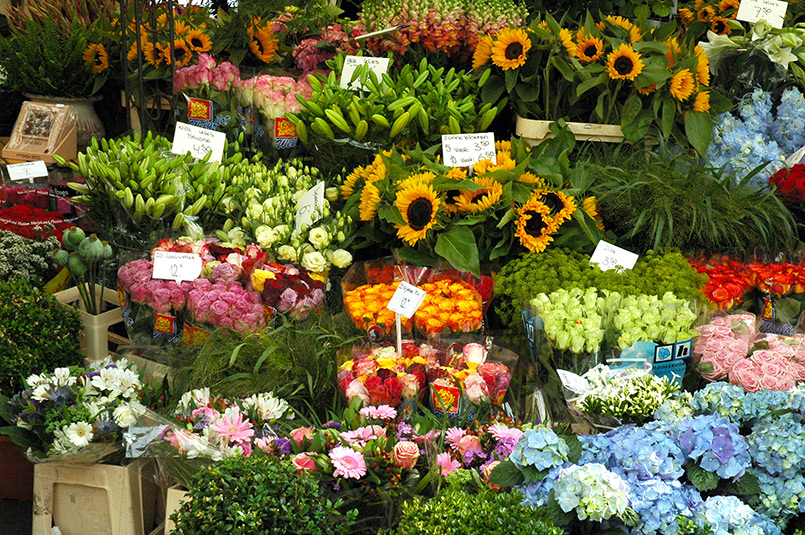 The Flower Market in Amsterdam is a big attraction; credit Jpatokal

The tulips, which brighten the Dutch countryside each spring were first brought there by herbalist Carolus Clusius in 1593 who planted imported bulbs from Turkey in the Hortus Botanicus (Botanical Garden) in Leiden. The Dutch craze with tulips dates back to tulip mania in 1620 when investors paid for rare bulbs with their weight in gold, forcing prices up until the market collapsed in 1636.

Today, Holland exports 6.5 billion bulbs worldwide which generates more than $500 million a year. Every spring, approximately 1.5 million tourists from all over the world visit the blooming bulb fields of Holland.

The Netherlands is well known as a cheese-producing country since the Middle Ages and popularized the use of weigh-houses to control the quality and weight of the cheese. In fact, the port of Edam exported one million pounds of cheese in 1649 alone. All the cheeses produced came from farms in the provinces of North and South Holland, Friesland, and western Utrecht. Although production has been taken over by factories, there are still over 600 farms that produce their own cheese, known as “Boerenkaas” (farmer’s cheese).

The farmer used to take his cheeses to a nearby cheese market once a week looking for a bidder. This tradition can still be seen in the towns of Gouda and Alkmaar which re-enact the ritual during the summer months. The Netherlands offers many types of cheeses which include Frisian, Gouda, Edam, Maasdam, Leiden, and Bluefort.

De Wallen is a designated area for legalized prostitution and is called Amsterdam’s Red-light District. It consists of a network of canals, streets, and alleys containing several hundred small, one-room apartments rented by sex workers who offer their services from behind a window or glass door, typically illuminated with red lights. In recent years, the city has been repurposing red-light district windows to clean up the area.