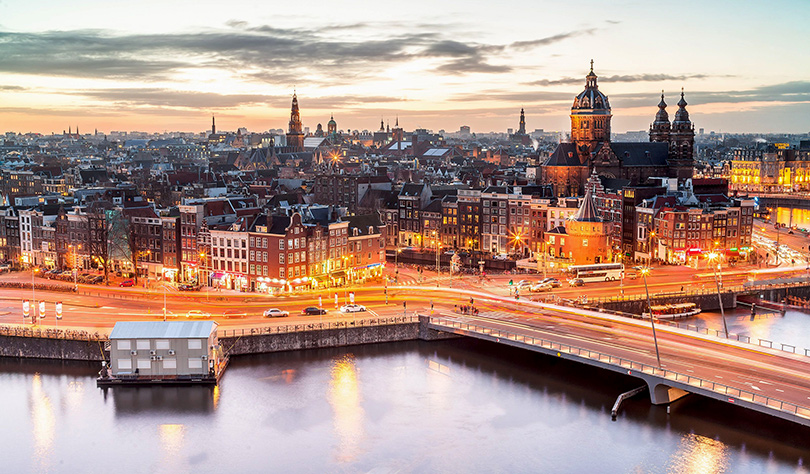 Amsterdam developed around a dam in the Amstel River at the end of the 12th century. The name Amstelledamme was recorded in 1275.

By the 15th century, Amsterdam had laid the foundation for Holland’s Golden Age. Very few medieval buildings survive today because most houses in the Middle Ages were built of wood vulnerable to fires and termites. Most are gone. So we see houses built centuries after the Middle Ages. Amsterdam was the capital of the Holland and prosperous, but when the southern city of Antwerp fell to the Spanish in 1585, it benefited from a stream of enterprising merchants and wealthy refugees and the city became the most important trading centre in the world.

West Indies House in Amsterdam was the former headquarters of the Dutch West India Company (WIC), which was probably the largest single slave trader in history. The company was chartered in 1621, and monopolized African slave trade until 1730. The WIC building was occupied from 1621-1647, a period which saw 30,000 slaves arriving in Dutch Brazil and 25 to Manhattan in 1625, arranged through the WIC. The WIC arranged routes required for bulk warehousing and transportation for slaves, sugar, cotton and tobacco.

Most traded export commodities passed through Amsterdam’s canals and rested in its warehouses before being traded on. Merchants came from all over Europe to the Commodity Exchange to set and speculate on future prices of sugar, cotton and tobacco from the Caribbean, often traded for gold and silver. These prices helped shape the demand for slave labor, gold and silver worldwide.

Thus Dutch innovations in auctions, finance, navigation and manufacturing allowed for African slaves and goods produced by slaves to be transported at greater capacity and lower cost. The first recorded trader sold 20 Africans to the colony of Virginia in 1619, the beginning of American Slavery. Dutch slave trade also took off in the sugar plantations of Northern Brazil in 1630 during wars with Portugal. A spoil gained from their war with Portugal, was Dutch control of many slave depots on the West African coast, centered in Ghana. By 1650, Ghana had dispatched 30,000 slaves to Brazil alone. 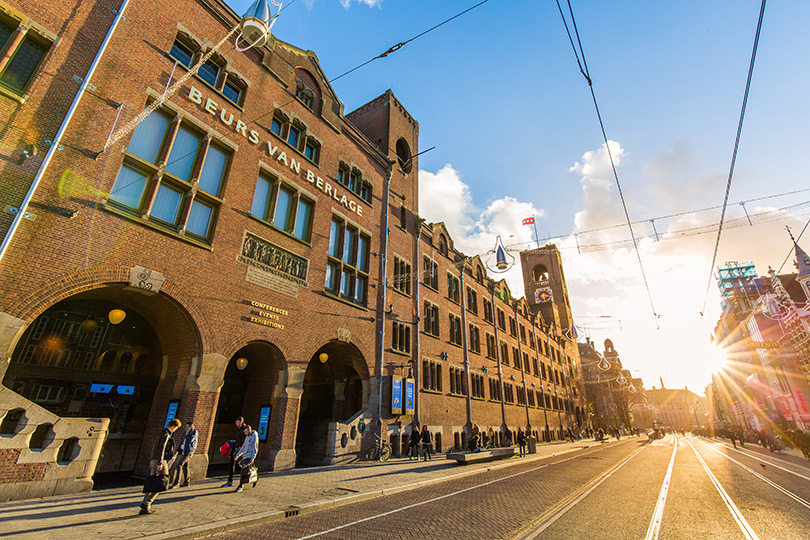 After the return of the Brazilian colonies to Portugal in 1654, the Dutch traders were able to draw upon their network of forts to supply other European powers, dominating the supply to Spain until the 1690s. However the near constant warfare the Netherlands were waged in with other European nations, such as Spain, France and Britain, by Imperial Spain, did eventually sap its strength, and Dutch involvement in slave trade effectively ceased in 1795. In the Middle Ages however, Amsterdam was surrounded by a moat, called the Singel, which now forms the innermost ring in the city, and gives Centrum a horseshoe shape. The city is also served by a seaport. It has been compared with Venice, due to its division into about 90 islands linked by 1,200 bridges.

In 1795, the government was overthrown. Soon the French, via Napoleon, occupied Holland. During 1795-1813, Amsterdam suffered an economic recession, many houses were vacant and few buildings from that period survive today. With the end of the Napoleonic wars, 1813-onwards was kinder to Amsterdam and Holland. Even though the Dutch also abolished slavery in 1863, Dutch agents had brought 540,000 Africans to the Americas. The vast wealth accumulated from slave trade funded Holland’s high education system as a means to adapt to the industrial revolution. It also enabled Amsterdam to dredged and upgrade more canals for ease of transport. Its three main canals became the Prinsengracht, Herengracht, and Keizersgracht, which survive today.

The Dutch economy did fantastically well, until World War I (1914-18), followed by the 1920s Recession that hit Europe. That Germany lost the war, the recession hit it hardest, giving rise to dissent that led to the Nazi Party and Hitler. By letting Hitler normalize his demagoguery against Jews, physically disabled and homosexuals, Hitler’s political and military power rose to scapegoating Jews for most of Germany’s troubles. By the late 1930s, the Jews were either scared out of the country or sent to infamous concentration camps.

Hitler’s ultranationalistic Germany began annexing adjacent nations, thereby starting World War II. As Germany was on its eastern and southern border, it came as no surprise that Germany invaded Netherlands on 10 May 1940 and took control of the country after 5 days of fighting. The Germans installed a Nazi civilian government in Amsterdam that cooperated with the persecution of Jews. More than 100,000 Dutch Jews were deported to Nazi concentration camps, of whom some 60,000 lived in Amsterdam. In response, the Dutch Communist Party organised the February 1941 strike attended by 300,000 people to protest against the raids.

Some Amsterdam citizens sheltered Jews, thereby exposing themselves and their families to a high risk of being imprisoned or sent to concentration camps. Perhaps the most famous person sheltered, but eventually deported was the young Jewish girl Anne Frank. Unfortunately, she died in the Bergen-Belsen concentration camp of Germany. In fact, relatively few Dutch Jews survived World War II.

At the end of World War II in 1945, communication with the rest of the country broke down, and food and fuel became scarce. Many citizens traveled to the countryside to forage. Dogs, cats, raw sugar beets, and Tulip bulbs—cooked to a pulp were consumed to stay alive. Most of the trees in Amsterdam were cut down for fuel, and all wood was taken from vacant dwellings. After the war approximately 120,000 Dutch were prosecuted for their collaboration with the Nazis.

Many new Amsterdam suburbs were built following World War II, leading the development of public parks and modern buildings seen today. As society was changing, politicians and other influential figures made plans to redesign roads for automobiles and implemented metro rail system. Demolisheded buildings were replaced by new ones corresponding to the medieval street plan of the neighborhood. The new city hall was built on the almost completely demolished Waterlooplein.

Meanwhile, large private organisations, such as Stadsherstel Amsterdam, were founded to restore the entire city centre. With many ongoing efforts visible today, the history of this remarkable city is well documented in the Rijksmuseum. Practically all of the old central district of Amsterdam, called “Centrum”, is a protected World Heritage Site. Citizens stopped a freeway from ripping through Centrum. Driving a car In Centrum is also discouraged, as parking fees are expensive, and many streets are closed to cars or one-way.

Today, Amsterdam is considered one of the most multicultural cities in the world, with at least 177 nationalities represented. The city is about 9% Moroccan, 8% Surinamese, 5% Turks, 3% Indonesian, 1.5% Ghanaian, 1.5% Dutch Caribbean & 1% American. Suriname was a Dutch colony. Segregation along ethnic lines is clearly visible, with people of non-Western origin, considered a separate group by Statistics Netherlands. People of Color concentrate in specific neighborhoods, especially in Nieuw-West, Zeeburg, Bijlmer and in small areas of Amsterdam-Noord.