You are here: Home1 / International2 / Abaco 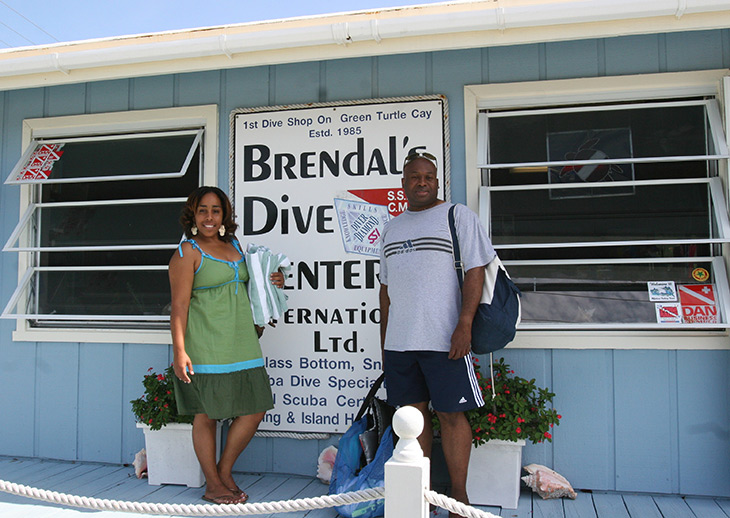 Abaco is a large island just east of Grand Bahama Island, with more preserved reefs and proximity by short flight or dive charter boat from GBI. That makes it an ideal day trip for dives or overnight dive trips. — Calvin Young, Soul Of America

My first dive trip took place off the Abaco Islands, Bahamas. What was it like? First impression, it was harder than I expected. Diving for a beginner is work. Never being much of a quitter, I quickly adjusted to the things that an air breathing human must do to live in water. Then came the wonder!

I was in the water, breathing, swimming, watching the fish as they swam, floating among the coral and the plant life. After I got past the mechanics of how to dive, a profound change came over me. I was no longer a thing apart from the aquatic life in the ocean; I became a person one with that life. The fish were no longer cold, mechanical, almost dead things that moved, they became more like pets, like Mulan and Mustapha, the family pomeranians. As bizarre and strange as it sounds, I formed a relationship with the fish. They became, well … friends. 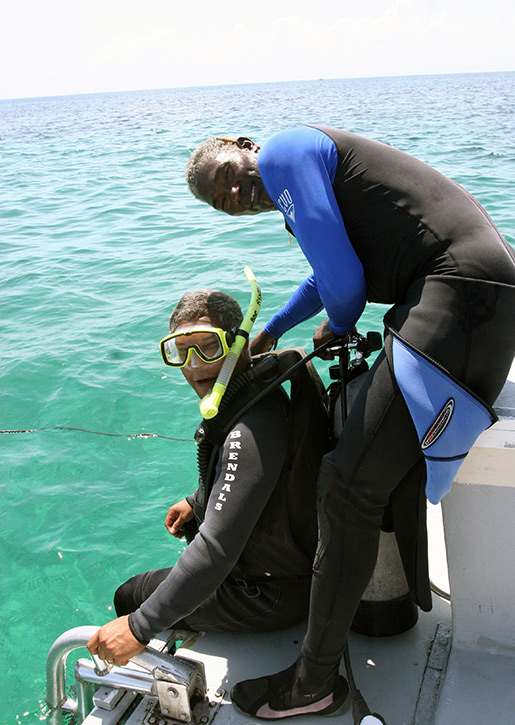 Diver gets ready with Brendals instructor; (c) Soul Of America

These fish had personalities, not like fish in a tank that just move about the water like motorized objects without purpose or intent. Some were stand-offish, cruising beyond our range. Other fish were businesslike as they went about searching for food. Some were friendly and seemed to enjoy our company. I was intimidated by an enormous black grouper who thought my toes were worms and tried to nibble on them. Surprisingly he was easily discouraged when I moved my foot.

One fish, in particular, helped with this transition. A large Nassau Grouper was the key to my becoming comfortable in what had been, until then, an alien world that I was not a part. We fed him. We rubbed his belly and then the bellies of other fish. We patted their heads. After a short time, they became my friends. Until this time, grouper was my food. Something I only enjoyed on a plate on a white tablecloth, or occasionally watched them swim in an aquarium. 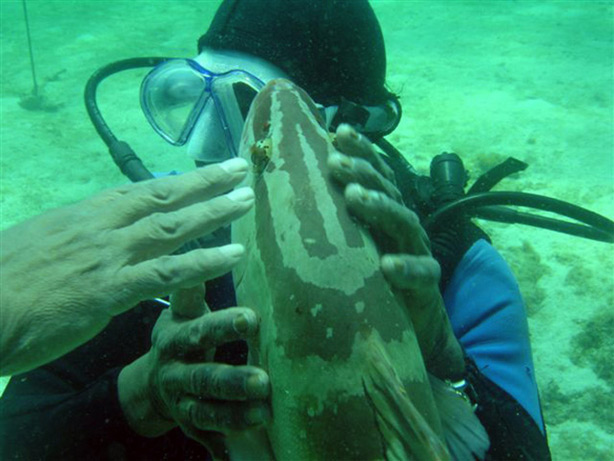 The fish also were different towards me. Since I was swimming in their world, they seemed to accept me as one of them. They expressed a curiosity and watched me closely as I moved among them. I am under no illusion that fish are like humans, but I am now aware that I share much more in common with them than I had previously suspected. We are both alive. We eat, we reproduce, we aggress, and we have tender feelings. I suspect that we both appreciate love, the universal language.

Let me digress for a moment. I had no fear entering this new world since I had been thoroughly prepared by Brendal, one of the few elite master divers in the world who has trained over 5000 people to become certified, including his two sons who have become master divers. I had to answer questions to ensure that my health was sufficient to enter the water with the gear, had to watch mandatory videos, and receive instruction to be sure I understood the rules. Brendal exudes patience, confidence, is gentle and guides you correctly, often without you even knowing you are being led. It was his preparation and skill that permitted me to become quickly at home in the ocean, and then one with that world.

Secondly, I was not prepared for the work that is diving. There are things you must do, like continuously clamp the mouthpiece in your mouth. Mouthpiece comes out, you could drown. Since I was not used to it, it was uncomfortable at first. I was not prepared for the noise of the bubbles that you breathed out. The suit was uncomfortable because I had eaten a somewhat large breakfast and I shouldn’t have. I was also a little too fat for the suit I wore. One must move body parts that are not used to moving. You have to constantly do things like adjust the mask, adjust the pressure in your ears, breath and breathe, and breathe again, through your mouth, not your nose. This particularly took some getting used to. 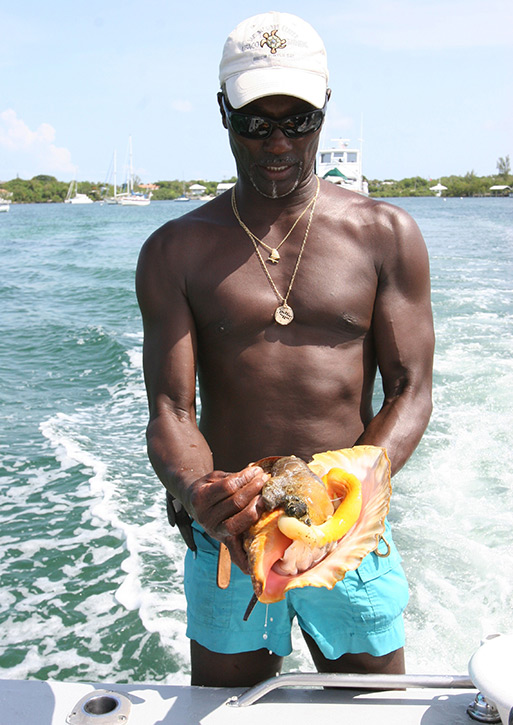 Fresh conch for lunch in Abaco; (c) Soul Of America

After I experienced and accepted all these things as part of the experience, I relaxed and began to have a whale of a good time. I think you get the idea. It was a world of discovery and wonder. Brendal pointed out tiny living things that I would never have noticed. They shall remain nameless because another limitation of diving is rudimentary communications. There are hand signals and Brendal can write on a board, but I could not ask questions and get answers. But, there really was no need for this as I reveled in the experience of total wonder.

You see things when you dive that you could never see and experience on land. After I fed and petted, the large grouper who behaved more like a dog than a fish, I saw that he actually enjoyed the petting as well as the food. Unbelievable! If someone had told me this, I would not have believed it. I inspected tiny sea creatures smaller than my hand. I moved among the coral of many colors and many types too numerous to mention, but not too many to feel the wonder of it all. Fish swam by just like I had been there all the time and was just another underwater neighbor.

However, my most wonderful experience was swimming in a school of silver sides. For all my skill at words, I cannot describe the feeling. I moved in and among the thousands of these tiny fish. Now silver sides are a prey species. They are very small and in the ocean, small is not good since everything larger than you will try to eat you. I would have thought that constantly being eaten by just about everything else would make them paranoid and panic at a new, strange potential predator. I mean, I know people whose childhoods were privileged, but had one bad experience that caused them to retreat into a shell and never become confident, mature adults who are willing to try new experiences. They expect new things to turn out badly. 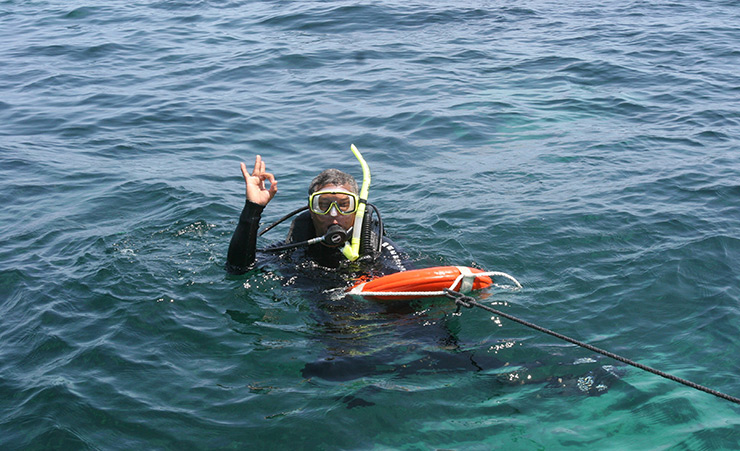 The silver sides knew instantly that I did not regard them as food and so they had no fear and easily accepted me as part of their world. Since there were thousands of them, I luxuriated in the experience of being immersed by them. I was of totally accepted. People spend their whole lives looking for that feeling. If this is close to what addicts feel the first time they use heroin, I can understand why they spend the rest of their lives chasing that feeling. I know that I want to dive again and again. I am convinced that our sense of wonder is a chemical reaction in our brain, similar to mood altering drugs. Diving is not as addictive, but just as compelling. I can understand why Jacques Cousteau traveled the world’s oceans constantly feeding off the sense of wonder he experienced.

After our adventure, Brendal caught several conchs and served us a delicious lunch of conch salad and other delectable’s on a nearby island. We stayed and enjoyed the surf and just soaked up the sun and enjoyed the sea breeze. Afterwards we returned to our hotel completely satisfied with our day. 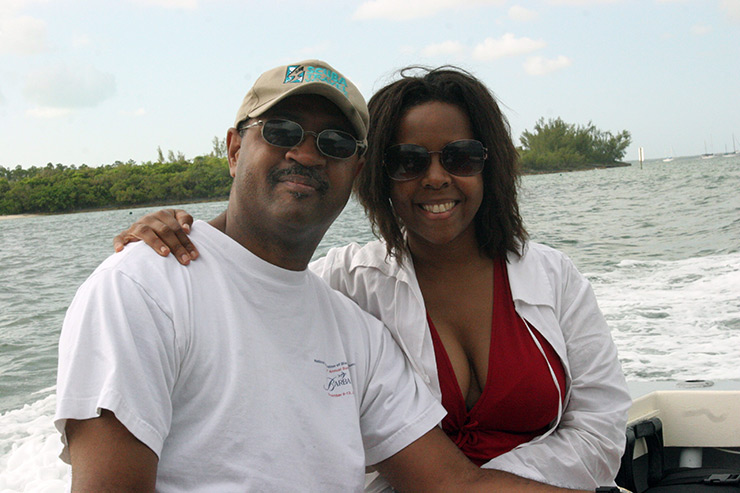