You are here: Home1 / Events2 / The Color Purple – National Tour 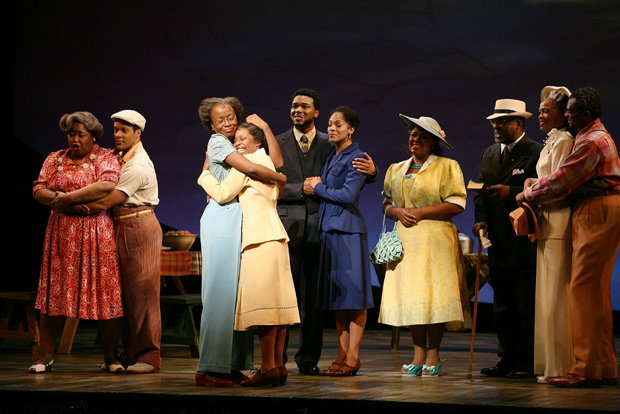 By Thomas Dorsey, Soul Of America

In faithfully adapting Alice Walker’s 1982 Pulitzer Prize winner, The Color Purple – National Tour transports you to a time when Southern women find the inner strength to conquer the challenges of a male-dominant society. The fast-paced yarn is at times raucous and beguiling, but always emotionally compelling and ultimately joyous. Director Gary Griffin, captures the feminine voice of the novel without succumbing to it. The Color Purple tugs at your heartstrings from curtain to curtain without, as some mistakenly believe, bashing all black males. Sisters will love this play without reservation. For brothers, it’s worth putting the male-bashing myth to bed before you see the play.

In fall 1985 when The Color Purple movie was released, brothers had every right to question Hollywood’s motives. Hollywood had only released one A-list movie showing positive Black male stars in the decade (Soldiers Story, 1984). The Cosby Show, with its positive male images only on air for a year, had not yet become an icon for Hollywood movie executives to factor into their thinking. So when the next A-List movie was released, black social critics were chomping at the bit. Given a large number of plays and best-selling novels written that featured positive black male stars, why was The Color Purple, the only A-List movie featuring black stars, green-lighted by Hollywood?

Was The Color Purple green-lighted because it had so much thought-provoking social commentary coupled with negative black male imagery? In the absence of a “Hollywood Green-light Commissioner,” the director (Steven Spielberg), the movie, and the author (Alice Walker) understandably and unfairly became the “whipping boys” for the sins and omissions of Hollywood.

Artistically, Spielberg did a great job. More than 20 years later, critics agree that this excellent movie stands the test of time. And who are we to criticize Alice Walker for drawing from several possible truths in her life experience or second-hand accounts to write The Color Purple, albeit embellished for storytelling? She, and anyone else, has artistic license to write as they please. Understanding those deeper factual reasons, I appreciated the movie on its own merit, not as the torch-bearer for what was wrong with Hollywood. In the same manner, the brothers should approach this play – purely for its artistic merit. When you do, The Color Purple emerges with a brisk storytelling flourish.

Earth tones and sparse poignant sets communicate impoverished, wooded farm life in rural Georgia. Flowers with hints of purple spread about, period costumes and brilliant lighting suggest that it is awkwardly picturesque. Music and lyrics by Brenda Russell, Allee Williams and Stephen Bray set to lush instrumentation accent the beauteous work-weary, farm-life on cue. Men till the soil. Women take care of the house, cooking and ‘chillins. Your mind’s eye fills in the texture of this sardonic life, made tougher for two young girls who lost their mother and were physically abused by their father until love and imagination prevail. 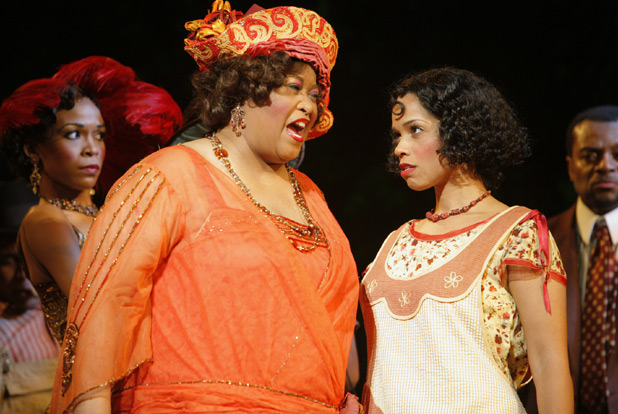 Sofia and Squeak, The Color Purple

The terrific, enigmatic three-ladies chorus and farm workers demonstrate the bounty of vocal range and harmony in the cast. The director wisely kept the singing and dancing of Shug Avery, portrayed by Michelle Williams of Destiny’s Child, seductively aligned with the book and movie. But make no mistake, Shug Avery still packs a vocal punch. Scene-stealing Sofia, played by Chicago stage veteran Felicia Fields, has a voice and demeanor as strong as timber. Hen-pecked Mister, effectively played by Rufus Bonds, Jr., forms a devilish counterweight to all the good feelings until he finds redemption and his macho voice.

The real surprise is Celie, played by Jeannette Bayardelle who understudied the role for many years on Broadway. We sense her every emotion. In Celie’s teen years, we struggle to hear her soft voice. As a more confident twenty-something, her volume increases. As a middle-aged woman who breaks loose from Mister, her sharp voice could cut a knife. And in celebration, Celie finally belts out a song, rewarding us with the rich tonal weight of all her years – to the roaring applause of all.

The only complaint I have about the play is its break-neck pace. At times I wanted scenes to extend so I could better digest the moment, the actors and sub-plots. Or am I comparing it too closely to the longer movie? Do not, however, be misled by this small quibble. You will get your money’s worth from every minute of the performance.

Though you exit the play in less than two hours, the memories and questions last.

Are Celie’s searing comments about the absence of love with Mister a metaphor for something larger? What happens to a strong Black woman like Sofia, even though she has a heart of gold? Even in the dirt-poor South, Harpo connects the dots between entertainment and enterprise. Are Mister and several other men an aberration or fairly common to small Southern towns in the first half of the 20th century? In the absence of a traditional, loving male-female bond, does one find love in bi-sexuality? How closely do scenes in the novel and play parallel the childhood of Alice Walker, her family and friends? 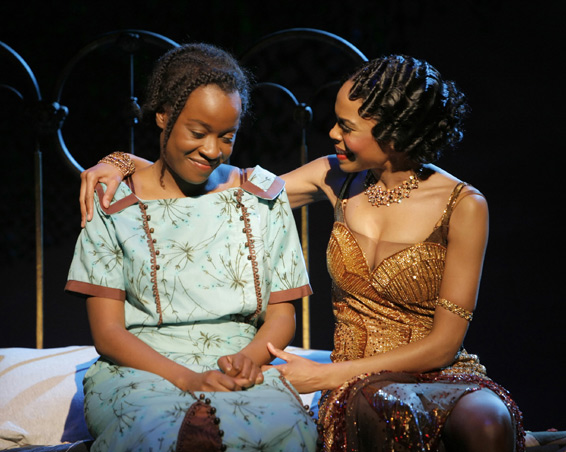 Having read the book and seen both the movie and the play, I still don’t know the answers to those questions. And maybe I shouldn’t. Maybe The Color Purple is best appreciated for the love and sense of hope it reveals. And like love and hope, we will never fully understand them, but we always welcome them on our doormat.