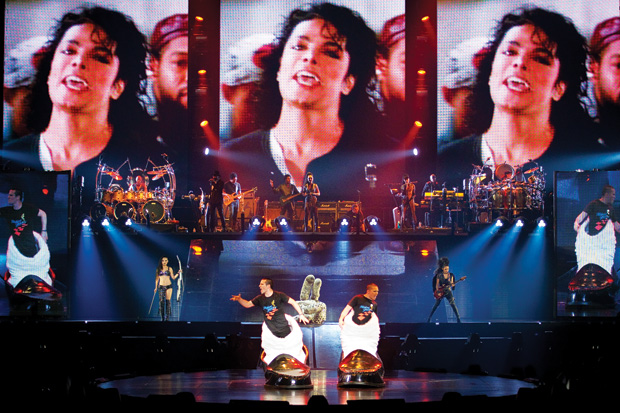 How does a show production meet overwhelming expectations for a tribute to Michael Jackson, the greatest entertainment icon of all time? How does that show honor the artistic genius whose songs, dance routines, videos and showmanship transformed pop culture worldwide? And if a show seeks to answer those questions, it can never measure up to the tease of Michael Jackson’s This Is It™ revealed to millions at the cinema, broadcast and on home video. For such a Don Quixote-like mission, Michael Jackson The Immortal World Tour™ springs forth with a bold artistic approach that lands on favorable, but mixed footing.

No director can include all the hit songs desired by domestic and international audiences in a 2-hour show. Since the show can’t be 8-9 hours, like triage, tough creative choices have to be made. Yet the show picks enough of his top hits to capture the essence, humanity and inspiration of MJ’s legacy that transcends generations, races and nations. A collage of visuals, dance, music, costumes and fantasy presents you a creative world partly envisioned by Michael Jackson, thrust forward in grand fashion by awarded-winning Cirque du Soleil director, Jamie King.

While honoring Michael Jackson via his music, choreography and vintage imagery, the director’s approach fully engages the world-class capabilities of Cirque du Soleil artistry, acrobats, aerial strap artists, mime, pole dancing, contortion and dance for show that at its best, is riveting, surprising and bountiful. Speaking of bounty, more than 60 international dancers, musicians and acrobats give several standing ovation performances as good as any Cirque show in Las Vegas. Music director and long-time Michael Jackson collaborator, Greg Philinganes, also delivers the goods with musical gusto. Since I saw the show at Staples Center in Los Angeles in January 2012, the appearance of Quincy Jones and other celebrities were added treats.

Before I get into more of the good stuff, I have to unload my disappointment with a few scenes, beginning with the Jackson Five visits Neverland scene and the chimp. The director intended the audience to perceive the J5 fanatics as trying to sing their way into Neverland, but they come off as caricatures who evoke off-putting confusion more than joyful tribute. Bubbles the chimp was cute the first time we saw him, but why does he annoy us showing up 2 or 3 more times for no good reason. And why was a song that elevated Michael Jackson to solo superstar status, Rock With You, missing, while one of his marginal hits got major love? Somebody missed the memo. 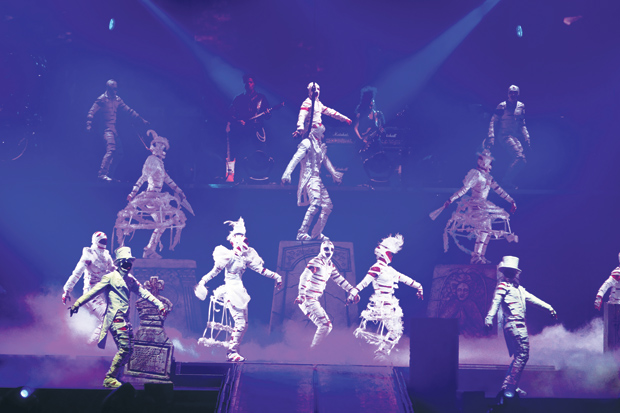 The show had other moments to soar, but instead took us halfway to musical bliss with a 4-song mega-mix (Can You Feel It, Don’t Stop Till You Get Enough, Billie Jean, Black Or White). The eye-catching Billie Jean light dance captured everyone’s attention, yet lacked the closing Wow Factor demanded of Michael’s signature song and dance routine. Just as I was ready to groove, Billie Jean quickly segued to a very good rendition of Black Or White.

For my taste, Beat It would have flowed better into Black Or White, amplifying the Rock vibe of both signature scenes earlier in the show. Cirque could also have substituted Rock With You for Can You Feel It to form a soulful vibe quenching mega-mix, Rock With You and Don’t Stop Till You Get Enough, flowing into a more definitive Billie Jean that could have brought the house down.

Now back to the good stuff. Cirque du Soleil’s maestro wizardry is evident from the first to last curtain, guiding the audience on a roller coaster from the gentle spirit of Michael Vulnerable to the iconic Michael Triumphant. On the high points of that roller coaster, Cirque’s creative touch feels organic to the emotional tenor of Michael’s songs. And when that emotional tenor includes Michael’s imagery, the show really soars.

That organic match is easily recognizable during eight or nine captivating scenes and one lesser known scene featuring a contortionist so good she’s scary. The sequence featuring This Place Hotel, Smooth Criminal and Dangerous was magnificent. And despite not having 3D effects or sound, riggings and staging as sophisticated as those in a Las Vegas Cirque du Soleil productions, Thriller was spectacular and satisfying. Staples Center was Michael Jackson’s last stage. If Michael was watching above the stage, I’d bet that his biggest eyes and widest grin found comfort with Thriller. 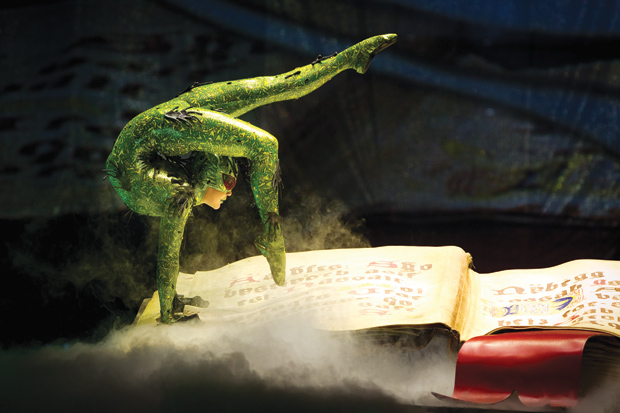 At the end of the day, no one can match the groundbreaking achievement that would have been Michael Jackson’s This Is It™ show, had he lived. Nor should Michael Jackson The Immortal World Tour™ playing in 20,000-seat sports arenas be judged to the standard of Las Vegas Cirque du Soleil shows playing in custom-built 3,000-seat theatres with complex aerial riggings, magical staging, surround sound acoustics, perfect sight lines that reveal more detail and intensify intimacy. When fans see this show, it should simply be judged as a touring tribute whose grand reach is somewhat short of the immortal promise we imagine.

Show tickets may be purchased at:
http://www.cirquedusoleil.com/en/shows/michael-jackson-tour