Like High-Speed Rail & Regional Rail, electric-powered Metro Rail and Bus Rapid Transit are space-efficient zero-emission transportation modes to reduce traffic congestion. When those modes are well-designed in a network, expanded, and meet at train stations, their Benefits over Costs multiply. Since our large metro areas are growing fast and denser, we must accelerate Metro Rail and Bus Rapid Transit projects in tandem with High-Speed Rail and Regional Rail projects. — Thomas Dorsey, Soul Of America

Rapid Transit divides into several types of routes and vehicles whose benefits and costs vary. Depending on the naming convention of each American transit agency, “Metro Rail” means Heavy Rail, Light Rail, or both. Since they have substantially different traits, I differentiate them as “Metro Heavy Rail” and “Metro Light Rail.”

What Americans call “Commuter Rail” is “Suburban Rail” in most of Europe.

Metro Heavy Rail Routes support 62-87 mph Top Speeds & 27-35 mph Average Speeds: Electric trains draw current from a 3rd rail opposite the passenger boarding side; they have subway tunnels and may have aerial viaducts; they have over/underpasses separating railway from the roadway for very high schedule dependability & safety; stops are typically 1/3 mile to 2 miles apart; station platforms are level with train floors for faster onboarding & offboarding; stations are designed for 6 to 10-cabin trains that have 550-900 rider capacity; they run every 2-5 minutes at Peak Hours, every 8-15 minutes Off-Peak; A Metro Heavy Rail line can transport 175 riders per cabin in an 8-cabin train to transport up to 36,400 riders/hour; By comparison, a 6-lane Interstate Highway transports only 8,000 riders/hour under optimal conditions; Metro Heavy Rail Routes have Very High Construction Cost Per Mile, but Medium Operational Cost Per Rider Mile since a driver is required.

Automated Metro Light Rail Routes support 55-62 mph Top Speed & 27-35 mph Average Speeds: Electric trains draw current from a 3rd rail opposite the passenger boarding side or from a linear middle track under trains; they have aerial viaducts and downtown subway tunnels separating railway from roadway for high schedule dependability; stops are typically 1/3 mile to 1 mile apart; station platforms are level with train floors for faster onboarding & offboarding; stations are designed for only 3 or 4-cabin trains with 300-400 rider capacity; they run every 2-5 minutes Peak Hours, every 6-10 minutes Off-Peak; due to smaller stations it’s Construction Cost Per Mile is lower than Metro Heavy Rail; since Automated Metro Heavy Rail is driver-less, it has Low Operational Cost Per Rider Mile and runs as frequently as Metro Heavy Rail. 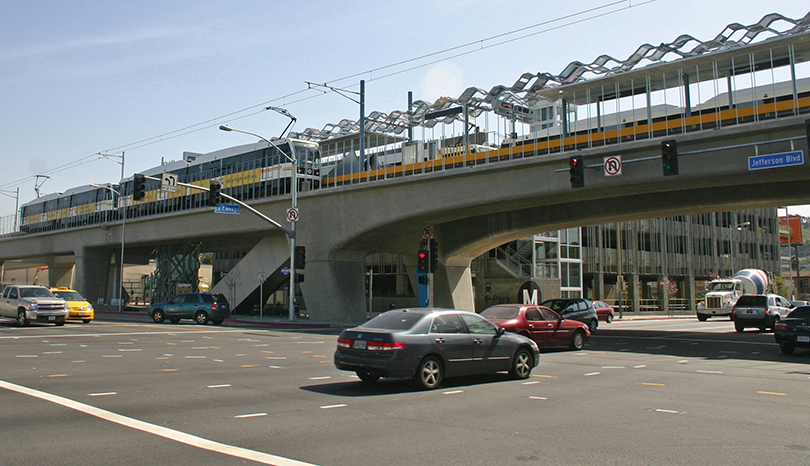 Commuter Rail Routes support 60-80 mph Top Speed & 30-40 mph Average Speed: Commuter trains run on legacy rail shared with freight trains; Their trains use diesel locomotives but are transitioning to diesel-electric locomotives for lower smog and greenhouse gas emissions; these routes often have 1-track segments that limit the frequency of trains traveling in opposite directions; though routes are adding better gates at railroad crossings and automated train control for safety, they have lower average speeds and schedule dependability issues because autos, people and animals cross tracks at too many places; a Suburban Rail Route typically transports 2,000-7,000 daily riders and runs every 45-60 minutes at Peak Hours, every 2 hours Off-Peak; Suburban Rail has Very Low Construction Cost Per Mile, but many miles per route.

Metro Area Regional Rail Routes support 62-93 mph Top Speeds & 35-50 mph Average Speeds: Their trains run on 2 Main Tracks with intermittent Siding Track for freight trains to pull aside; The begin with diesel-electric locomotives; Over time, they upgrade to electric trains that draw current by extending pantographs up to overhead electric wire called “catenary”; Along with automated train control, they have more overpasses, underpasses and street closures than Commuter Rail for higher speed, frequency, schedule reliability, and safety; a route typically transports 15,000-50,000 daily riders and runs every 15-30 minutes at Peak Hours, every 30-60 minutes Off-peak; Enhanced Suburban Rail has Low Construction Cost Per Mile, but many miles per route; Paris RER in the video below is a great example.

Bus Rapid Transit (BRT) Routes support 50-60 mph Top Speeds & 16-22 mph Average Speeds: They mostly run on Dedicated Busway, but have fewer over/underpasses and street closures; they typically have more stops per mile than Rapid Transit modes; sub-par BRT designs run a portion of their route in mixed traffic like local buses, crippling their average speed; BRT has 75-90 seats; they typically run every 6-8 minutes at Peak Hours, every 12-15 minutes Off-peak; BRT is best suited to corridors transporting under 20,000 daily riders that feed Central Business Districts, train stations, and rapid transit stations; though BRT Routes have the Lowest Construction Cost Per Mile, by 2035, most in America will transition to electric power and better stations, drawing their construction costs closer to Trams; since it requires more drivers per rider, BRT has higher Operating Cost Per Rider Mile than other modes of Rapid Transit.

America Has a Problem That Highway Widenings Can’t Fix

NYC metro area has transportation options like most big cities around the world. It’s an American outlier with the highest Construction Cost Per Mile for Rapid Transit routes. But its hyper-dense population supporting 24 Metro Heavy Rail lines, 12+ Commuter Rail lines, and 2 Light Rail lines form an expansive network that attracts very high ridership per mile, particularly in Manhattan, while Brooklyn, Queens, and The Bronx attract high ridership per mile. NYC is the only American metro area where over 50% of commuters use Rapid Transit and local buses. And yet NYC Metro Heavy Rail System needs more station modernization and new lines crisscrossing Brooklyn, Queens, and The Bronx. NYC Commuter Rail Network needs a faster upgrade to Regional Rail for longer 1-seat rides.

As a result, America has a Herculean task to build comprehensive Rapid Transit lines that form “mesh” networks in our largest metro areas.

Our large metro areas are dipping to 20-24 mph average highway speeds at Peak Hours and Weekday Peak Hours are getting longer. These trends are no surprise to transportation planners. Widening freeways beyond 3 Standard lanes & 1 HOV lane per side does NOT reduce highway & boulevard congestion.

To state it another way, further freeway widening is like loosening your belt to treat obesity.

Sorry, Autonomous Vehicle fans. They will not solve highway congestion in the next 40-50 years. Read this informative article by The Conversation explaining why.

What should successful Rapid Transit networks look like? How many lines are appropriate for 1, 2, 4, 6, 10, and 20 million population metro areas? For guidance, American metro areas should follow the best practices of European metro areas:

• Do not build BRT lines in corridors likely to draw over 15,000 daily riders, since those corridors are better suited to Metro Light Rail or Trams.

• In 14-21 million population metro areas, build 30+ Rapid Transit lines intersecting at multiple Intermodal Transportation Centers and multiple other stations in a world-class comprehensive mesh network where most commuters are within a 4-block distance to a network station.

Below are European metro area examples of Rapid Transit networks. When you click on their names, consider these important traits on their maps. Since the 1973 Oil Embargo, they have been gradually converting Suburban Rail to Regional Rail routes with over/underpasses, street closures, 2 Main Tracks, intermittent Siding Track, and electric trains. European nations target completion of electric-powered Regional Rail conversions by 2040.

President Kennedy became aware of the implications of that trend. If it continued unabated, auto-centricity would hollow out the CBDs of major cities and dramatically increase taxes for infrastructure rather than consumer spending. So JFK proposed a federal agency to fund rapid transit projects radiating from the CBDs of our major cities. After JFK’s death, President Johnson ushered his vision to reality with the Urban Mass Transit Administration (now called Federal Transit Administration).

This chart by TheTransportPolitic.com only covers 2010-19, but accurately summarizes America’s 1965-2020 over-investment in Highways compared to under-planning and under-investment in Rapid Transit. 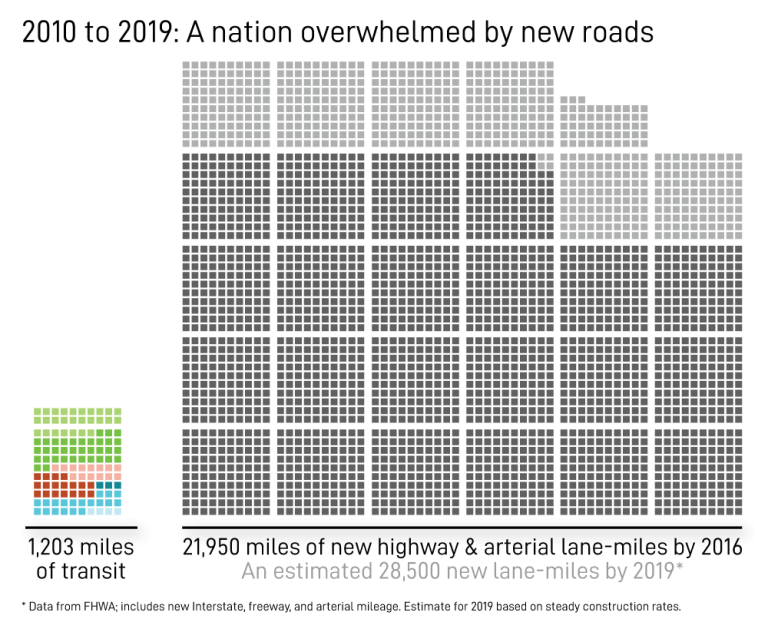 Opening its first Metro Heavy Rail line in 1976, Washington has expanded more lines form a mesh network and several lines go to Washington Union Station. That train station is a now a intermodal transportation center for Amtrak HSR, Regional Rail, Commuter Rail, Metro Heavy Rail, Intercity Buses, Uber, Lyft & Taxis. Dramatic public space, a retail center, a food court, and a location near the U.S. Capitol made it a tourist attraction. In 2022, Metro Heavy Rail expanded to Dulles International Airport. By 2026, Washington Union Station waiting area expands and more Transit-Oriented Development will be built over its tracks. A Metro Light Rail line is under construction that will ring the Maryland side of the Washington Metro Area and connect with several Washington Metro Heavy Rail stations.

Yonah Freemark of the Urban Institute studied the importance of Rapid Transit and increasing bus frequency in 100,000+ population urban areas. His study reveals a strong correlation between people with no Rapid Transit access and low-frequency bus service to higher unemployment levels. Consider those benefits as our Top 250 Metro Areas head to 200,000+ population and our Top 60 Metro Areas head to 2+ million by 2050.

If they don’t expand Rapid Transit faster, public pressure will increase to further widen highways. That is why America needs 4 times more Rapid Transit projects funded simultaneously than at present. In that manner Rapid Transit systems can be strong partners to High-Speed Rail and Regional Rail discussed in Part 6.