After reading this section you should understand why the alternatives fall short of Interstate High Speed Rail & Regional Rail for most (not all) 25-500 mile travel and fall short of Rapid Transit for most (not all) 5-25 mile travel. For a faster transition to high-capacity, Zero-emission mobility, Automotive and Aviation industries must focus on the distances and types of travel they perform best while collaborating with High Speed Rail, Regional Rail, and Rapid Transit to be their best as well.

Most oil used by airlines is consumed by the worst polluting and least fuel-efficient segment of the Transportation sector — regional flights under 500 miles overland. But according to the Regional Airline Association, regional airlines in the U.S. account for 41% of commercial flights. The association also claims that regional flights declined from a peak of 5.14 million in 2007 to 3.86 million in 2018 due to pilot shortages, high operational costs, and small inefficient 50-seat jets.

Most regional flights go from midsize airports to large airports in a “Hub & Spoke” pattern, where crews string together flights ranging from 150 to 2500 miles per shift. The 150-450 mile segment of flights generates the most Greenhouse Gases (GHG) and Smog Per Mile of any passenger transportation mode. They only have 5-25 minutes at fuel-efficient cruising altitude and speed.

In 2001, fuel costs were 10% of airline operating costs. By 2011, they were 35%. Today, jet fuel is the largest operating cost of airlines, followed by labor costs. Airlines typically burn 15-20% of fuel at take-off and landing. When airline jet crew speed time on the ground, they are still paid without generating revenue.

If an airline of small and midsize jets strung together only 150-500 mile flights, it would burn more fuel, spend more labor cost per mile, and lose money. Aware of that math, airlines are cutting short flights and increasing ticket prices of short flights to offset higher fuel & labor costs per mile. Since airlines make more profit the longer jets are airborne, longer flights with high occupancy rates better fit their business models.

Airlines are also excited about the complete transition to NextGen Air Traffic Control by 2025 that will shorten flight times with quicker takeoffs and landings. For example, the Federal Aviation Administration (FAA) projects that NYC-LA flight time will reduce by 30 minutes, thereby cutting GHG & Smog emissions each flight. All flights over 550 miles 7 of the 10 busiest flights in America, will receive 7-30 minute flight time reductions.

Pre-pandemic, worldwide air travel was growing 5% per year. That trend is resuming in 2022. The American population is growing in our mega-regions. More travelers will drive 1-3 hours to airport hubs in our Top 25 Metro Areas. Those combined trends will increase highway congestion, airport hub congestion, GHG, and smog emissions. They will also decrease economic productivity.

Though there are outlier exceptions where its more time effective to fly over water & land for 350 miles (NYC-Toronto), rather than by a 160 mph High Speed Train (that doesn’t yet exist in NYC-Toronto corridor), America needs high-capacity, green mobility alternatives to 150-450 mile air travel in high activity corridors.

To reduce GHG & smog emissions and drive Risky Oil consumption in the U.S. Transportation sector below 10% by 2045, we have to ramp up the electric car & small truck sales. In 2021, U.S. automakers took a major step towards that goal with a commitment to 40-50% Electric Vehicle (EV) sales by 2030. California will stop selling oil-powered cars and small trucks by 2035. With volume ramp-up, EVs are becoming more affordable to mere mortals.

At present, EVs have a 260-405-mile fully-charged range, depending on the model. Mileage-per-charge reduces when you crank up the air conditioner on a hot day or if you frequently gun the accelerator.

Tesla introduced thousands of Supercharger Stations across America that gives a 175-mile range boost in 15 minutes. Engineering advancements should make new EVs capable of 350 to 400-mile range and batteries should recharge faster by 2024. By 2030 onwards, EVs will lower smog and GHG emissions on roadways.

The explosive popularity of EVs also brings some bad news. First, EVs greatly increase battery demand and the need to mine for minerals used to make batteries. They don’t have to be rare earth minerals, but substantially increased mining will release GHG and other toxic gases into the atmosphere. And if America is not careful, we could become reliant on battery materials from China or another conflict country.

Second, EVs will not solve highway congestion. Estimates indicated that 76% of pre-pandemic commuters were solo drivers. National Vehicle Miles Traveled also increased after 2015, as more people got jobs, then bought cars after the Great Recession. About 70 million Americans will be added to our population between 2016-45. More of them will buy cars & small trucks. If the rate of solo driving along with more freight trucks for online shopping resumes after 2022, highway congestion will increase. As highway congestion increases in America, travel productivity decreases.

One of the biggest hoaxes foisted on commuters is that more lanes reduce highway congestion. Believing that hoax, too many people fall for political promises to solve traffic congestion with more highway lanes. If we continue adding lanes under the false choice of highway congestion relief, 10-16 lane highways will create more frequent traffic jams. 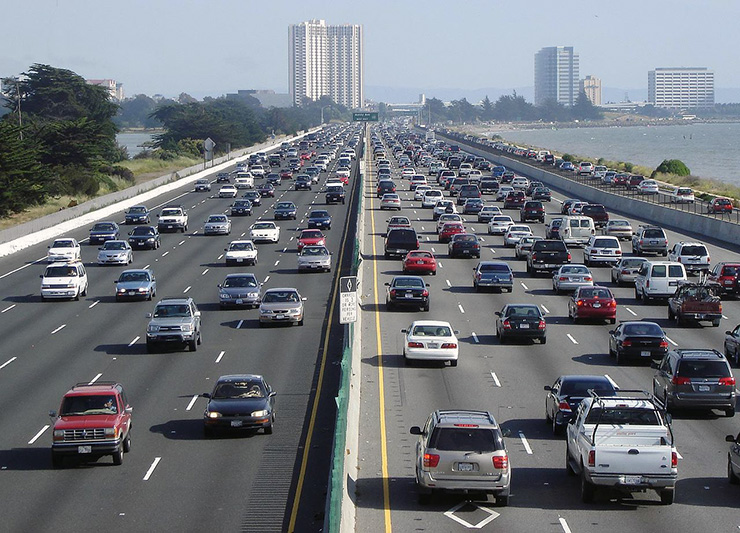 Queuing Theory applied to non-stop highway lanes indicates that the most efficient, highways have only 2-lanes-per-side. Though lane-efficiency drops a bit with 3 standard lanes-per-side highway, it does add significant capacity. A 4th standard lane-per-side highway only carries about 65% more capacity than a 2-lane-per-side Interstate Highway. We boost that capacity a little by making the 4th lane HOV. Lane efficiency, however, quickly goes downhill with more lanes per side. In other words, taxpayers pay more but get less lane capacity beyond 3 standard lanes + 1 HOV lane per side.

A wise traffic engineer summarized the conundrum perfectly, widening highways to solve traffic congestion is like loosening your belt to treat obesity.

Intercity Bus service is competitive for 25-150 mile travel. It does not, however, have the speed, rider capacity, frequency, and zero emissions of HSR & Regional Rail. In high-activity corridors, Intercity Buses also get stuck in traffic jams and slow in highway work zones. All of that reduces schedule reliability. There are plenty of proof points on the European continent.

Here’s another trend. Though Intercity Buses powered by Compressed Natural Gas (CNG) are an option today, Europe is committed to cut 55% of GHG & smog emissions by 2030 and reach Zero GHG emissions by 2050. Burning CNG does not qualify towards those goals because its GHG & smog emissions are much higher than Very Low-emission Biofuels and Zero-emission Hydrogen Fuel Cells. Hence, European Intercity Bus Operators and Freight Truckers are converting to biofuel-power with an eye towards future hydrogen fuel cell-power.