Interstate High Speed Rail Rationale is more compelling than simply great infrastructure like our global economic competitors. Our population and urbanization have outgrown highways and airports. Given our population growth, America is not doing enough to reduce traffic congestion, cut smog, nor slow Global Warming.

The “Golden Era of Highway Driving” that began around 1950, ended shortly after the second OPEC Oil Embargo in 1979. In that era, cars were cheap, gasoline was cheap and new highways opened every month. The Federal Gasoline Tax covered all highway maintenance. Highway capacities typically limited “Rush Hour” to only 30-45 minutes in the morning and evening. Americans bragged about driving 70 mph on urban highway and 85 mph on rural highway. They don’t brag about those speeds as often today.

American population is growing faster than highway capacity. Pre-COVID highway congestion was also worse because America grew from 64% urbanized in 1950 to 82% urbanized by 2019-end. When you look at the U.S. Census Bureau data, population & urbanization forecasts, and pre-COVID rates of automobile purchases, things will get worse: 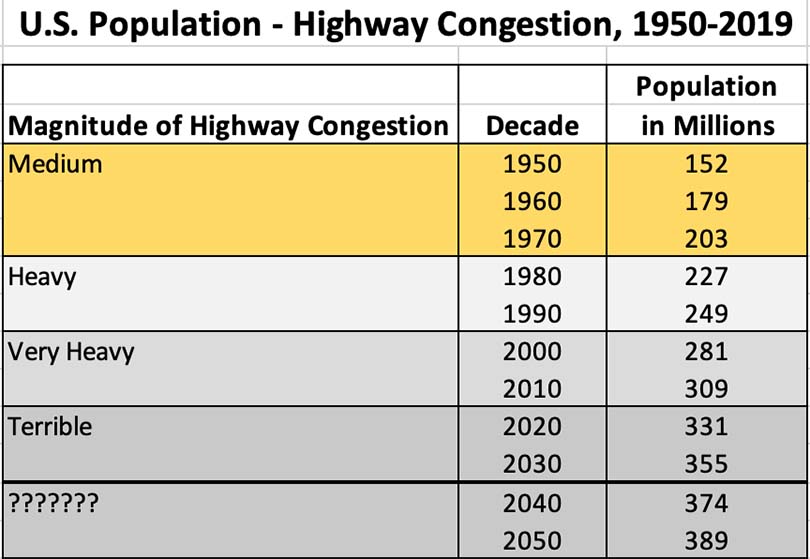 Most travel originates & ends inside regions that generate the greatest economic activity that economists call “Gross Domestic Product (GDP).” Highway and Airport congestion in the high-activity corridors of mega-regions reduces productivity. That in turn, lowers GDP and reduces job potential.

By 2050, our Top 75 Metro Areas will have 1.2 million population or larger. They increase density of 100-to-500-mile corridors in regions that demographers call “Mega-regions”, as color-coded on the America 2050 Map below. 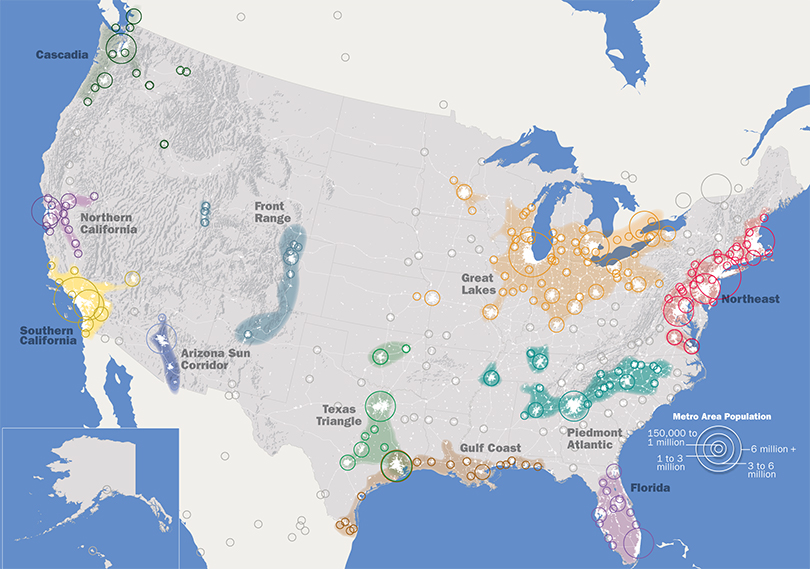 America must dramatically increase its mobility capacity within and between metro areas in the corridors of mega-regions to prevent further loss of transportation-related productivity, lower GDP and less job creation.

Most people don’t know however, that smog levels remain unhealthy. Nor are many aware that catalytic converters do not trap greenhouse gases (GHG). Consequently, the Transportation and Energy sectors remain America’s largest contributors to Smog and GHG due to: 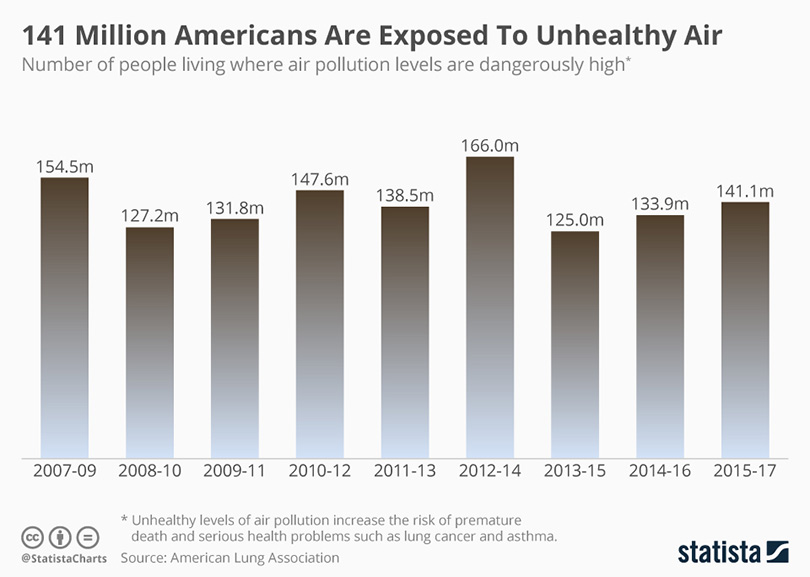 Another insight is NYC Metro Area has 25 times the population of Bakersfield Metro Area, yet lower Smog due to having one of the world’s largest electric passenger rail networks.

In 2011, 33 of the 48 largest oil producing nations hit Peak Oil Condition. Many economists call this kind of easy to access fossil fuel, “Cheap Oil.” Peak Oil Theory was correct at predicting that oil several hundred feet from the surface is declining.

In 2020, America had only 5% of world population, yet consumed 20% of world oil production.

In the last two decades, oil & natural gas companies pioneered technology to drill thousands of feet underwater and underground, then use a horizontal process to break tightly packed shale that unleashes oil & natural gas. The process is called “Fracking.” The industry calls the resulting oil and natural gas “Tight Oil” and “Tight Natural Gas”, respectively. By that industry creating a job boom in domestic oil & natural gas, most Americans just go along, to get along.

The U.S. Energy Information Administration (EIA) reported that America’s Tight Oil & Gas production soared to 96% of what we consume. If the trend continues post-pandemic, EIA estimates America can become oil self-sufficient around 2030.

Will the oil boom last to 2040 and is that good news? Answering the first part, Maybe. Answering the second part, only in the short term because it buys us time to build up Renewable Energies. 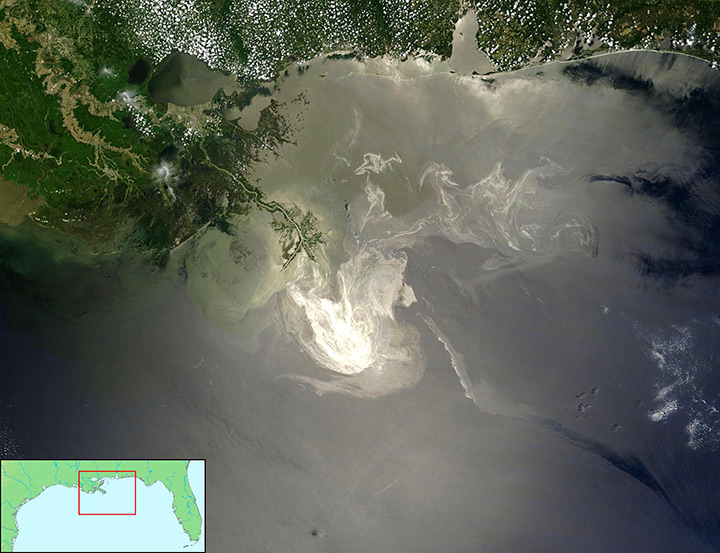 Small oil spills happen all the time. But as the NASA image above reveals for the BP Gulf of Mexico spill in May 2010, the pursuit of Tight Oil in deepwater has catastrophic risks compared to Cheap Oil close to the surface. Imagine a similar catastrophe polluting water aquifers deep underground. Minimizing the probability of catastrophic spills requires expensive technology, rigorous safety inspections and luck. That is why it is more accurate to call Tight Oil & Tight Natural Gas, “Risky Oil & Risky Natural Gas.”

World population is forecast to grow from 7 billion in 2012 to 9 billion by 2043. Though populations are stabilizing in the European Union, Russia and Japan, huge population growth in China, India, Indonesia, Malaysia, Thailand, Brazil, Pakistan, Nigeria and Mexico is driving their economies to demand more fossil fuels and wood.

The global consequences from rising demand for coal, oil & natural gas and wood deforestation are profound because their extraction processes and burning emit greenhouse gases (GHG) and smog (Ozone & particulates). Based on their volume and impact, scientists categorize carbon dioxide (CO2), methane (CH4) and nitrous oxide (N2O) as the most dangerous set of GHG. Excessive deforestation for commercial wood in Brazil, Central Africa and Southeast Asia also reduced the world’s ability to absorb CO2 emissions before they reached the upper atmosphere.

Airplanes burn oil-based jet fuel that emits Carbon Dioxide and Nitrous Oxide around airports and high in the atmosphere, where it’s most dangerous at trapping heat. The World Resources Institute provides this equally insightful chart of CO2 Emissions by Nation: 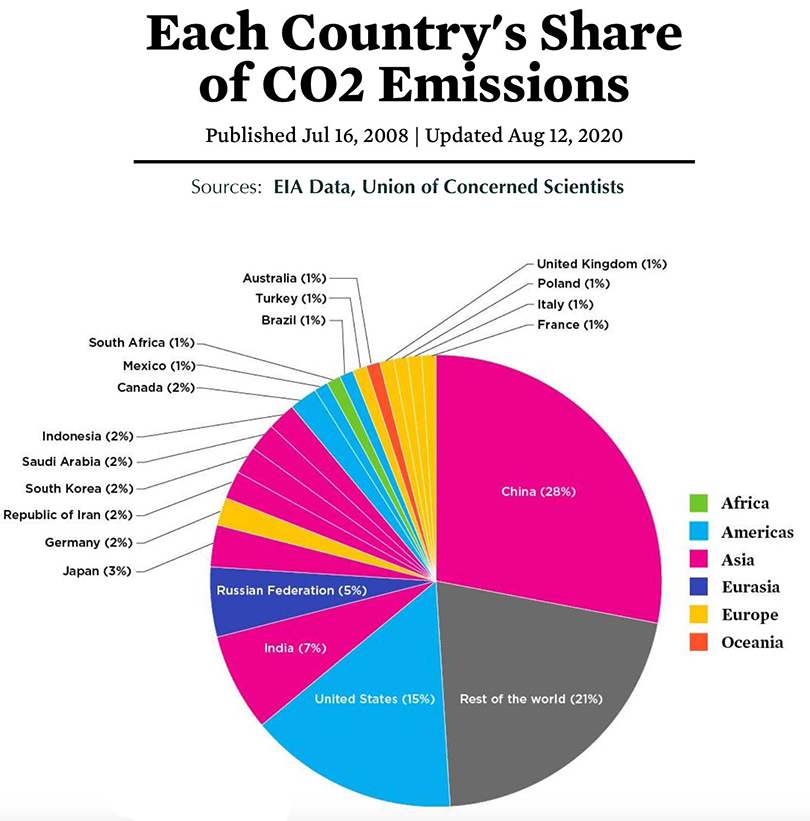 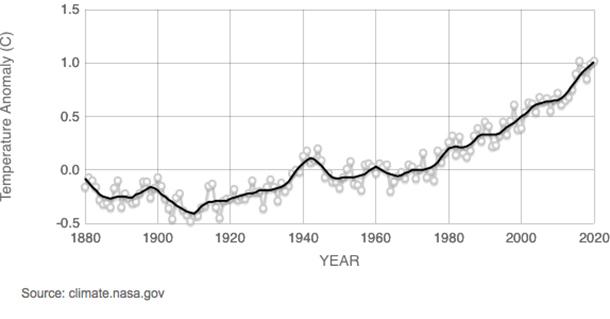 Methane, the primary component of natural gas, is emitted during coal, oil, natural gas & other deep mining, when not burned completely and when natural gas refineries vent & flare. Methane gas has a shorter atmospheric lifetime than Carbon Dioxide, 12 years compared with centuries. But while it exists, Methane is 20 times more powerful than Carbon Dioxide at trapping heat in the atmosphere.

Fortunately, its cost-effective and technologically feasible to cut 75% of Methane emissions from oil & natural gas operations, but stronger federal regulations are needed. That may be easier for the nations to do, where national policy is stronger in the matters. In contrast, the U.S. has natural gas permitting and venting restrictions at state level. Without federal restrictions, a state like Texas can emit far more Methane per capita than California.

Nitrous oxide is another prominent emission from burning coal and jet fuel. Nitrous oxide is 310 times more powerful than carbon dioxide at trapping heat because jets emit it high in the atmosphere. The EPA says that globally, about 40% of nitrous oxide emissions come from flying and the other large chunk comes from coal burning.

To prevent widespread calamity by 2050 and 2060, 99% of climatologists say we must dramatically cut GHG emissions by 2030 and 2040. Its good that America’s Coal consumption is rapidly declining, but we must set stronger global examples for Carbon Dioxide, Methane and Nitrous Oxide reductions in our Transportation and Energy sectors.

Does America have viable Transportation alternatives to reduce GHG, Smog and traffic congestion? Will Americans adopt them? See Part 4 for insights.