Los Angeles to Las Vegas High Speed Rail service has been a vision for decades. But it needed modern conditions to unfold before materializing. Journeys between that city-pair have grown to a 5 hour drive and 3 1/2 air travel time. Los Angeles metro area, whose population approaches 20 million, is the largest place of origin for visitors to Las Vegas. Recognizing opportunity with proven train technology, venture capitalists are backing a passenger train company to build it. But like many Las Vegas stories, the project has unexpected twists and turns. — Thomas Dorsey, Soul Of America

Las Vegas-Los Angeles High Speed Rail (HSR) began with a commercial real estate developer and casino-owners. Like many before them, they wanted to introduce high speed trains between Las Vegas and Los Angeles to increase patronage. They formed XpressWest and made the first big commitment towards that HSR vision, albeit from a Las Vegas starting point. They raised a $1.5 billion of private funds in 2009. That was far short of the $7 billion needed for Phase 1 between Las Vegas and Victorville in Southern California, but they kickstarted preliminary designs and solicited public input for the required to achieve Environmental Clearances in Nevada and California.

California HSR project had its public bond passed by voters in 2008 and rail authority formed in 2009. A California HSR segment is required in Palmdale-Burbank Airport-LA Union Station corridor in order to create San Francisco-Los Angeles service.

XpressWest planned to build Phase 1 from Las Vegas to Victorville in Southern California, just off I-15 Freeway. Most drivers from Southern California took that freeway in route to Las Vegas. Seeing high speed trains running between Las Vegas and Victorville would be great advertisement. As ridership grows, XpressWest wants to extend from Victorville to Palmdale, then piggy-back on Palmdale-Burbank Airport-LA Union Station corridor segment by leasing track access from California HSR Authority and LA Union Station access from LA Metro.

XpressWest advanced its Los Angeles-Las Vegas High Speed Rail project through the critical Environmental Clearance process, but things stalled. In early 2018, things got back on track when the backers of Brightline Florida passenger rail company bought the controlling interest in XpressWest.

Before 2018 ended however, the controlling partners of Brightline soured on Richard Branson’s underwhelming commitment to Virgin Trains Las Vegas project. They parted ways with Branson and renamed the HSR project “Brightline West.”

In 2019, Brightline West figured out ways to reduce the project down to $4.9 billion in Phase 1 by using mostly I-15 Freeway median and eliminating the intermediate station in Barstow. They found less expensive property in Las Vegas. Clark County Nevada Planning Commission approved 111 acres for the new Brightline West Station at well south of the Strip, across from Las Vegas South Premium Outlets. Brightline West also closed escrow on 284 acres in Victorville.

Initial target market for Brightline West is San Bernardino County and Riverside County residents who will drive 15-45 miles up I-15 and I-215 Freeways to Victorville, then transfer for a 90-minute train ride to Sin City.

Some NFL fans have already dubbed it “Raiders Train” because the football team has an abundant Southern California fanbase and the Raiders Allegiant Stadium opened in 2020, 1 mile north of Brightline West Las Vegas Station. On game days, Raider fans will purchase combination train & shuttle tickets from Las Vegas Station to the stadium. 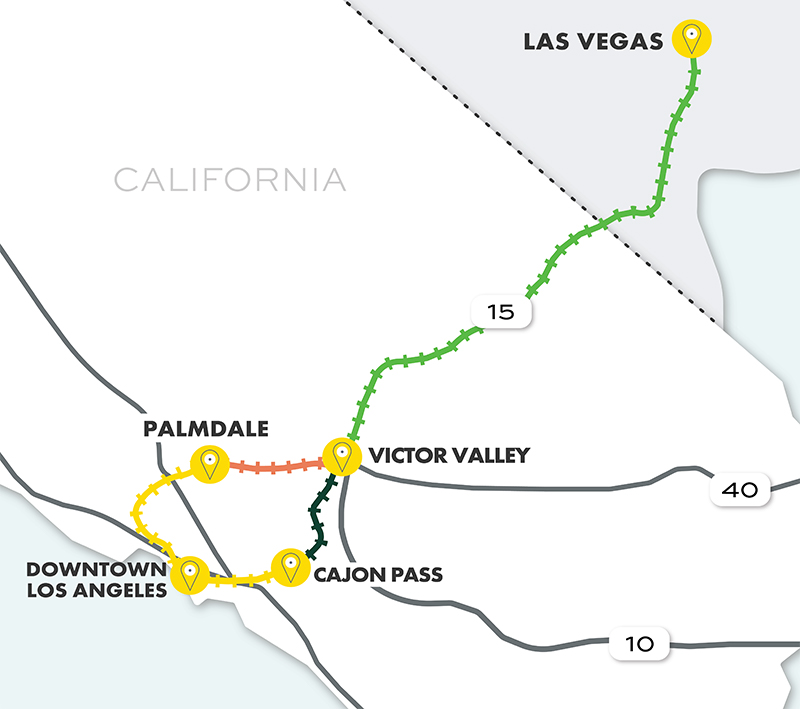 Metrolink commuter rail also wants to extend its service from Palmdale to Victorville. Metrolink Palmdale Station already has capacity to share with Brightline West. Metrolink must also be a partner in any application for federal, state and county funding to build the 53-mile High Desert State Highway & Rail corridor between Victorville and Palmdale.

Planning is underway to replace Metrolink Palmdale Station with a larger California HSR Palmdale Transportation Center nearby. Thousands more daily riders from Santa Clarita and north San Fernando Valley would ride Metrolink or drive 20-45 miles on the freeway to Palmdale, then transfer to Brightline West for a 233-mile ride to Las Vegas. They would do so because their 30-60 minute drive to Palmdale combined with a 2-hour train ride to Las Vegas is still shorter and more relaxing than air travel or a complete drive to Las Vegas.

For more insights on the challenges and progress of California HSR and its relationship to Brightline West, visit the links below.