Interstate High Speed Rail Taxonomy is organized by speed categories from slowest to fastest. Outside America, others would call it an Intercity High Speed Rail Taxonomy. Other advacned and emerged nations have better Intercity Passenger Rail than America, so this narrative series often lists miles per hour (mph) beside kilometers per hour (kph). Note: 6.213 mph = 10 kph and most nations denominate passenger rail speeds by increments of 10 kph (150. Since there are plenty of exceptions worldwide, I’ll often use the word “typically” as a descriptor. — Thomas Dorsey, Soul Of America

If you’re an American planning to visit Western Europe or Eastern Asia, please include a High Speed Rail (HSR) ride between two cities. Along with urban and rural scenery, you will appreciate the speed, frequency, reliability, and comfort features named below. Afterward, imagine how an Interstate HSR System would benefit you at home.

If that sales pitch doesn’t work for you, watch this short video about French HSR.

Many of these routes have 2-track tunnels to match 2 Main Tracks plus intermittent Siding Track for freight trains to pull aside. A few routes have over/underpasses at railroad crossings. Though diesel-electric trains can reach 125 mph (201 kph), they rarely exceed 80-81 mph without more over/underpasses because a Diesel-Electric locomotives pulling an 8-car passenger train on level track needs about 1 mile to stop. That is why routes having Quad Gate Systems still limit diesel-electric trains to 95 mph.

Regional Trains running on Regional Rail Routes typically operate every 15-30 minutes at Peak Hours, and every 30-60 minutes Off-peak — both depending on ridership demand. 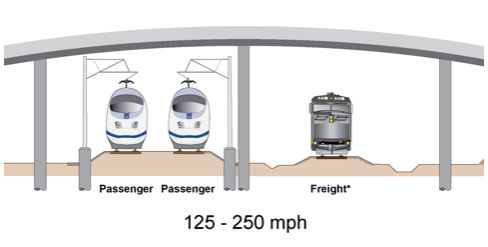 For higher speed, safety, and schedule reliability, HSR systems build over/underpasses at all railroad crossings, close off small streets, and install fencing to prevent people, other animals, and automobiles from crossing. These routes are designed to operate at financial breakeven or at a profit.

1st Generation HSR Routes can typically support up to 149 mph (240 kph) Top Speed: They are upgraded from Legacy Rail infrastructure; mostly electric trains run on them for faster acceleration & deceleration; they have upgraded signaling, automated train control & communication systems; HST typically run 124, 130, 137, or 143 mph (200, 210, 220, 230 kph) on them; a 5-cabin High-Speed Train conveys about 250 passengers; HST typically runs every 30 minutes at Peak Hours, every 60 minutes Off-peak on them; A small percentage of these routes permit diesel-electric locomotives until the route converts to electric power systems; HST typically run at 86-90% schedule dependability on these routes.

3rd Generation HSR Routes can support up to 199-205 mph (320-330 kph) Top Speed: These routes are built as modern high-speed infrastructure; they have longer tunnels & viaducts for milder curves than 2nd Generation HSR Routes; their tracks are shaved for smooth rides; only light-weight, aerodynamic HST use their dedicated high-speed tracks; HST typically run at 186 mph (300 kph) on them; a typical 7 to 9-cabin train has 360-480 passenger capacity, while 7 to 9 bi-level cabin trains enable 570-740 passenger capacity; HST typically runs every 15 minutes at Peak Hours, every 30 minutes Off-peak on them; HST typically run at 97-98% schedule dependability on them. Japanese HST is an exception with 16-cabin trains having 1,323 passenger capacity, running every 5-10 minutes at Peak Hours and every 15-20 minutes Off-peak with 99.9% schedule reliability. 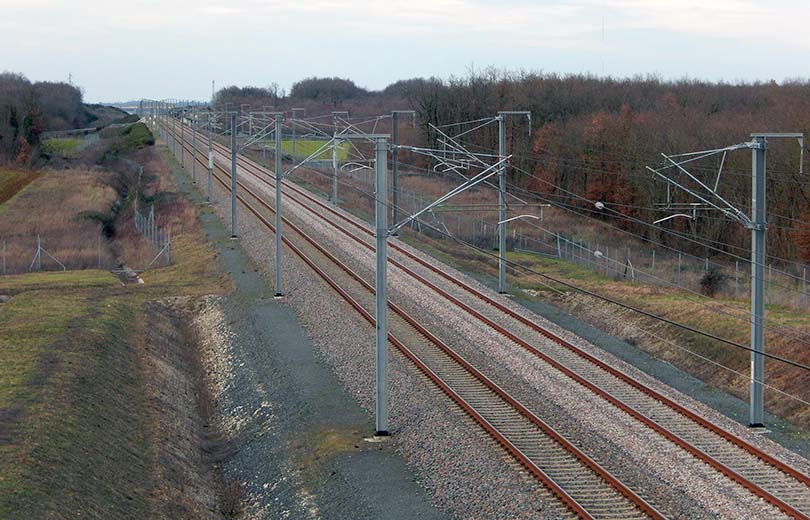 4th Generation HSR Routes can support 224-249 mph (360-400 kph) Top Speed: These modern routes have longer tunnels & viaducts, more earthmoving for milder curves, and flatter profiles than 3rd Generation HSR Routes; their tracks are shaved for baby-smooth rides; their overhead catenary is strung tighter and more durable than 3rd Generation HSR Routes; though current HST runs up to 199 mph (320 kph) on them, Nextgen HST are will run 205-224 mph (330-360 kph) on them; these routes are designed for 97-99.9% schedule dependability; a typical 9-cabin train has 500 passenger capacity, while 9 to 11 bi-level cabin trains enable 740-855 passenger capacity; these routes also set safety standards for all transportation modes.

In the rest of this series, I combine all generations of High Speed Rail routes together as “HSR” for group context, but separate HSR generations when specificity requires. “HSR systems” refer to the combination of HSR route infrastructure, HST and operating practices.

The French took passenger train & railway engineering to another level by building the fastest HST in 1981 (168 mph), 1988 (186 mph), and 2007 (199 mph) while maintaining a spotless safety record in commercial operation. At the same time, Italians introduced wheel technology that tilts HST with advanced suspension to enable 12 mph (20 kph) faster speeds through curves.

HST Operators don’t want excessive energy costs eating profits either. A Law of Physics is that wind drag scales as the cube of vehicle speed. That means an HST that requires 1X electricity to overcome wind drag at 150 mph, requires 2X electricity at 225 mph, and 4X electricity at 300 mph.

In 2017, China was the first nation to introduce Nextgen HST running 217 mph (350 kph) on a 4th Generation HSR Route. An equally remarkable engineering feat is that you can balance a coin on the train’s window sill at 217 mph. Other HST Operators have announced 2024-30 plans to introduce Nextgen HST running at 205, 211, 217, 220, or 224 mph on 4th Generation HSR routes. As of this writing, no HST Operator plans to run HST higher than 224 mph to avoid higher energy costs and higher maintenance costs from wearing down wheels and brakes faster.

Italian HST Operators took passenger amenities to another level. They introduced First Class service that has premium leather reclining seats, 3 or 2 seats across a row, private group seating, Quiet-Cabins and the option for upscale dining.