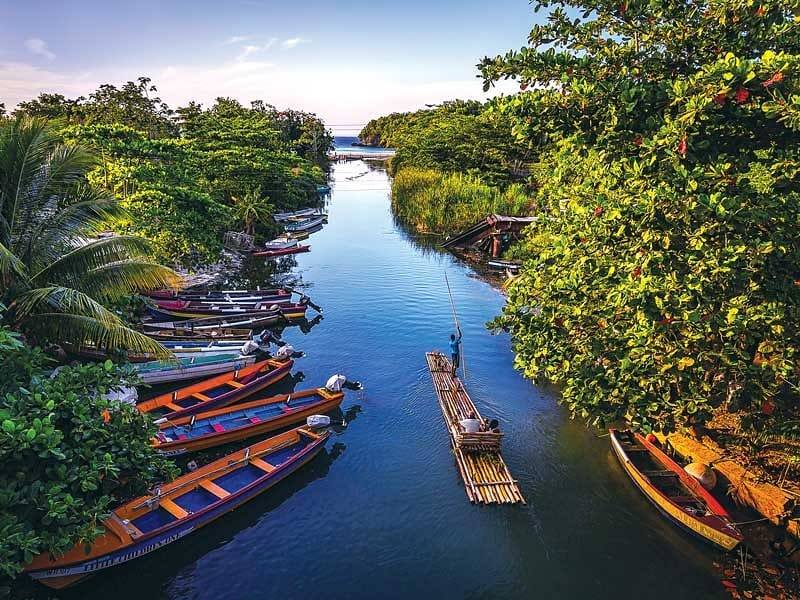 You can relax on a river raft in Ocho Rios, Jamaica before venturing just an hour away to the birthplace of Kamala Harris’s father, Donald Harris; credit Jamaica Tourism Board

Travel experiences inspired by Kamala Harris’ personal history will have you floating in Caribbean waters, sipping a latte in India and finding where the Black Panthers began their revolutionary reign. If you’re planning to travel, even virtually, map out an itinerary that pays homage to our Vice President Elect.*

To find black culture in each destination, check out Soul Of America Black Travel Guides.

Jamaica’s two hottest travel spots are a little more than an hour’s drive from Brown’s Town, birthplace of Kamala Harris’ father, Donald Harris. A professor emeritus and economist, he claims to be a descendant of the town’s founder, Hamilton Brown, a 19th century slave owner. The centuries-worn cemetery bears Brown’s remains beneath a headstone towering above all others. The tradition of river-rafting in Jamaica, developed by African slaves to transport patrons, is a tourist attraction today.

Kamala’s late mother, Shyamala Gopalan Harris, was born in Chennai, India, a cultural and industrial metropolis that offers general tourist appeal. But the quainter Pondicherry, three hours away, will whisk you away to France. The French gained control of this southeastern city in 1674, and you’ll find hints of that history in the architecture, food and language.

Pondicherry even has its own French Quarter, La Ville Blanc. From its waterfront cafes, you can sip a latte while enjoying a view of the Bay of Bengal. Though you can’t travel to India now, our guide gives a taste of what to expect when you can. 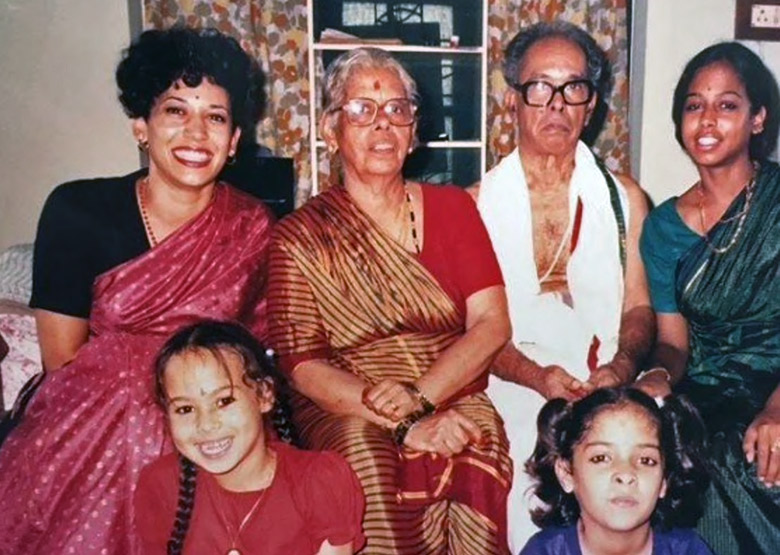 Kamala often gives a shout out to where she was born, Kaiser Permanente Hospital, which has been re-built on the corner of Broadway and MacArthur boulevards. A 10-minute Uber ride away is the first office of the Black Panther Party, 5624 Martin Luther King, Blvd. Fittingly, the location is now a black-owned bakery named “It’s All Good.” 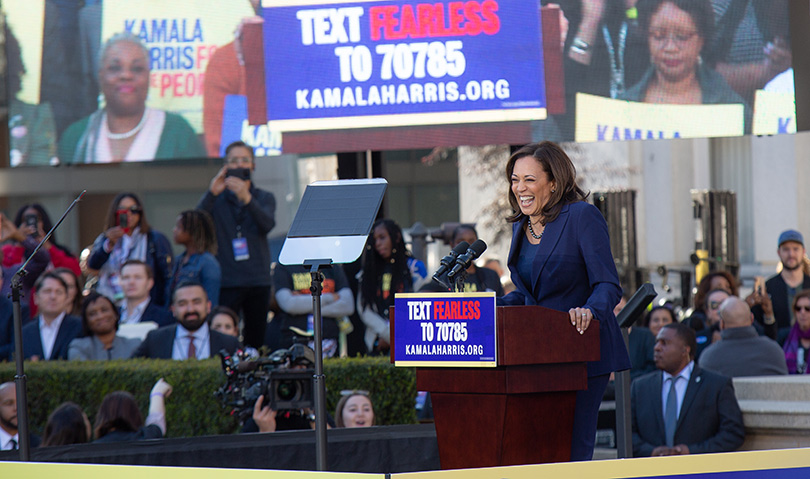 Kamala Harris announces her bid for the presidency on January 21, 2019 in Oakland’s Frank Ogawa Plaza

The Ashby Station of the Bay Area Rapid Transit (BART) subway is walking distance. Take the train to the 12th Street/City Center station and stroll to nearby Frank Ogawa Plaza.  Kamala kicked off her campaign for the presidency there on January 21, 2019; she will be sworn in as Vice President one day shy of a year later.

Side Trip – Oakland borders Berkeley, home to the University of California at Berkeley, where her parents met and pushed her in a stroller at protest marches.  A few miles away is Thousand Oaks Elementary at 840 Colusa Avenue, where she went to school.  In now famous remarks to Joe Biden, Kamala spoke of being “that little girl” bused to Thousand Oaks as part of a Berkeley schools integration program.

From 2003 to 2007, Kamala served as District Attorney of San Francisco, an iconic travel destination. But few people know of landmarks like the Mary Ellen Pleasant Memorial, which honors a woman born a slave.  Pleasant went on to build a business empire and establish the Western Terminus of the Underground Railroad.

Leidesdorff Street is named after African-American millionaire businessman William Leidesdorff, who owned extensive property in the financial district, including the city’s first hotel, the City Hotel.

The Golden Gate Bridge is a world-reknown icon in San Francisco, where Kamala was elected District Attorney in 2003.  Any visit must include the city’s memorials to African-American millionaires of the 19th century.

A cultural hub that includes the War Memorial Opera House, the Louise M. Davies Symphony Hall and Herbst Theatre is located near where Kamala graduated from U.C. Hastings College of Law School at 200 McAllister Street.

The nation’s capital is home to Kamala’s alma mater, widely respected Howard University. Visit the campus to see where she won her first election and where she pledged Alpha Kappa Alpha to continue a life of service and political activism.

The District of Columbia also served as backdrop to her increasing esteem as the junior senator from California. She is well known for heated senate hearing exchanges, holding testifying witnesses accountable with blistering cross examinations.

Due to Covid-19, you can’t tour the Senate Chambers at this moment, but our travel guide lists many black outdoor heritage sites and monuments.  And best of all, you can still reserve tickets for the African American Museum of History and Culture.

Daughter of immigrants. Child of protest movements. Student of a historically black college. Political giant of our time. Vice President-Elect of the United States States. Who better to provide inspiration for morality, justice, truth…and travel than Kamala Harris?

And no matter where you go, check out these 10 Travel Tips We Bet You Never Heard Before.

*Always check the Center for Disease Control and U.S. State Department websites for Covid-19 updates and restrictions to keep you healthy and safe while traveling.