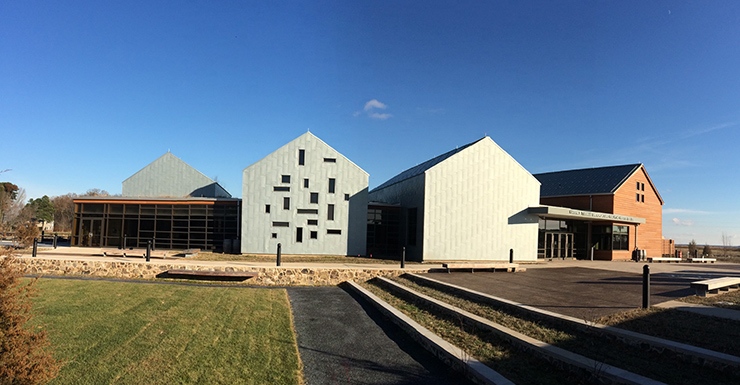 One of the greatest aspects of travel in the United States is traversing the open road. Exploring America as it is today and its history winding along highways and byways. The distinction of a byway being that it represents a specific theme or storyline of Americana. One of the newest such routes denotes the history of the Underground Railroad in Maryland.

Many people know the Underground Railroad mythology. It makes sense that the nuts & bolts of how it worked were never written down out of fear of entrapment, re-enslavement and persecution. Historians are finding facts to counter this misconception. And mighty though Harriet Tubman was, she did not act in a vacuum. There are written accounts of people escaping slavery from day one in the 1600s. There are historical documentations of slave rebellions and protests against fugitive slave acts. Many people escaped without aid from the Underground Railroad. Many bought their freedom. Others ran away on their own but were re-enslaved by betrayal through family members, strangers. Some were re-enslaved due to running out of funds or being subject to criminal acts, like battery and theft.

At the end of the day, self-emancipation evolved into the formal Underground Railroad network. 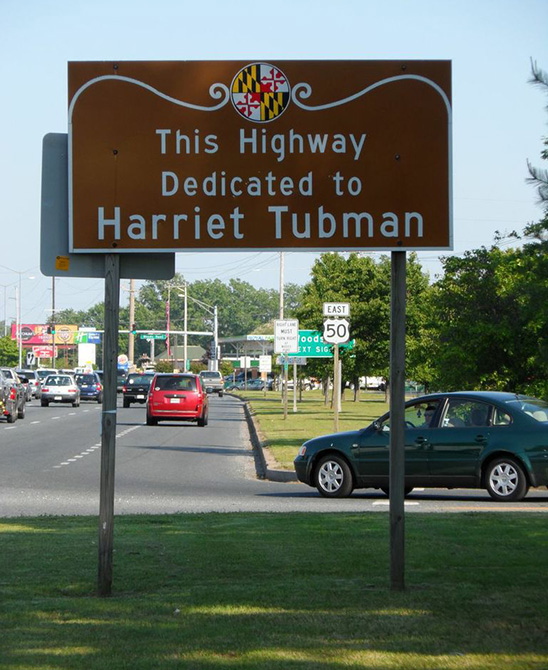 When people are asked who best represents the Underground Railroad, the most iconic figure is Harriet Tubman. She is justifiably one of America’s greatest civil rights heroes. Her position as the conductor of the Underground Railroad, Union nurse, spy and status as the first woman to lead an armed raid in the Civil War is complex and extraordinary. Her life and legacy as a freedom fighter and American patriot is legendary. So the designation of this byway to freedom as the Harriet Tubman Byway is fitting tribute to a woman seen as “The Moses of Her People”.

Before you see the coming Hollywood movie about her life, the Harriet Tubman Byway and Underground Railroad Visit Center is a must visit.

Born into slavery in 1822, the highlights of Tubman’s life read like a biblical superhero. Forced into child labor, Tubman endured beatings and deadly conditions as a muskrat collector in the swamps and marshes of Maryland Eastern Shore. As a young adult, a near maiming by assault with an iron weight left her with seizures and debilitating headaches the rest of her life. Despite her hardship and disability, Tubman not only served as emancipator, but performed as a powerful suffragette for women’s rights well into her golden years. Armed with a pistol and a self-professed resolve from God, Tubman made over 70 trips into the hostile South and successfully brought ALL her charges safely to freedom in the north.

With 2013 marking the Centennial of her death, a year-long national celebration of her being was held. Her home state of Maryland, specifically, the Eastern Shore led the celebration. Harriet Tubman Byway is laid with trail markers through Maryland and Delaware. The byway is slated to continue, as Tubman did, through Pennsylvania, New York to end at St. Catherines, Ontario, Canada. The trail itself is based on where Harriet Tubman said she went, as documented in an 1897 interview with Wilbur Siebert. The historic interview chronicles who she met, the states she traversed and how many people she transported.

Previous visitors to Maryland may be familiar with trips to Annapolis and travels along the Chesapeake Bay for sailing, fishing, crabbing and kayaking. Harriet Tubman Byway affords travelers and history-seekers the ability to enjoy sailing and nature watching, while enjoying a pristinely preserved insight into the routes traveled, family histories and communities that comprised the Underground Railroad system. Dorchester and Caroline counties serve as the starting point for this 125-mile byway. The byway is best followed as it was used, from South to North on this MAP. 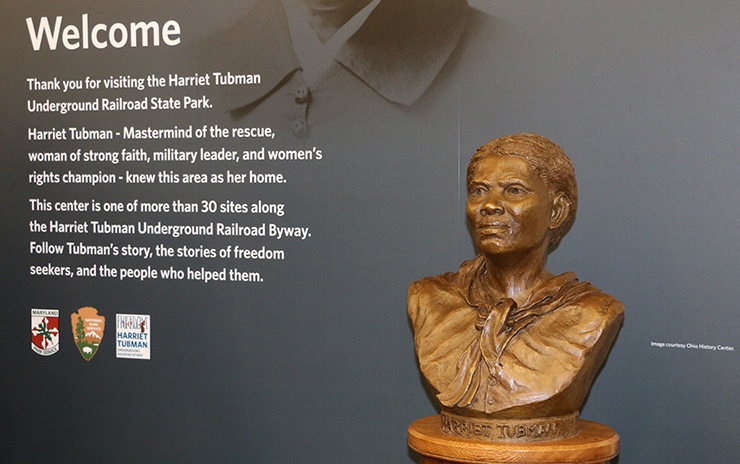 Harriet Tubman Byway officially begins at Dorchester County Visitor Center, #1 on the map. The Dorchester County Visitor’s Center maintains an exhibit and overview of the area and sites featuring Harriet Tubman and the Underground Railroad. The display of the black maritime community of oystermen and crabbers of Eastern Shore should be of equal interest. As you see from the Map, the beginning of the byway wraps like a lasso. The Byway’s sites, sidetracks and water trails offer more than two dozen points of interest — from the Dorchester County Visitor Center, to the marshes of Blackwater National Wildlife Refuge, to places where Tubman lived and worked as an enslaved child.

Others may chose to begin at the historical birthplace and 27-year home of Harriet Tubman — Brodess Farm, #14 on the map. As this is still family property, Brodess Farm is not open to the public, but it’s easy to imagine a young Tubman and peers living on and working the field of this vast farmland. This part of the trail is also marked as a piece of the Civil War Byway.

Up the road a piece at the crossroads of Bucktown Road is the Bucktown Village Store, #15 on the Map. Here is where the near deadly blow of a two pound weight hurled at an escaping slave, instead struck young Harriet, changing her life. The store has been preserved with the utmost care for historical accuracy and the owners provide educational tours by bicycle or kayak and are authorized as part of the National Parks Services Pathway to Freedom Program. Further still in Bucktown is the Scott’s Chapel Church. Dedicated in 1858 by donation of land from John Scott, it is still an active church. Its cemetery holds the graves of the Scott family and black and white parishioners, although gravesites are historically divided by the color line of the roadway between them. 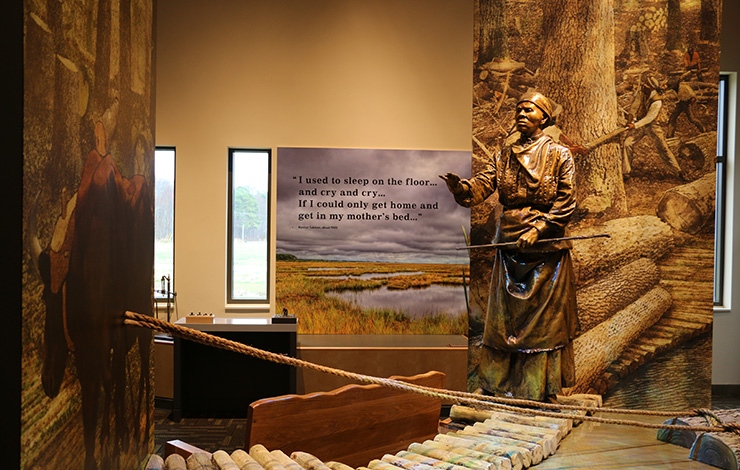 There is also a small Harriet Tubman Educational Center in Cambridge, #4 on the map. The next numerical stop on the driving tour is the Harriet Tubman Memorial Garden. The Memorial and its environs are maintained by the relatives of Tubman who still live in Dorchester County. The centerpiece mural was painted by one of her descendants.

Looping back into town brings you to the Dorchester County Courthouse. The courthouse ties directly to Tubman as being the site where she creatively orchestrated the escape from the auction block of her niece Kessiah and her two children. Tubman arranged for Kessiah’s husband a free sailor named John Bowley to artificially bid on his family. Bowley placed the winning bid and then whisked his wife and children by boat to a waiting Harriet. She then carried them to freedom in Philadelphia. The Dorchester County Courthouse also served as the sentencing ground for Underground Railroad conductors and agents. Here, conductor Hugh Hazlett was sentenced to 44 years imprisonment for aiding and abetting fugitive slaves. Railroad agent Samuel Green, free African-American preacher, was sentenced for 10 years imprisonment for owning a copy of Uncle Tom’s Cabin. 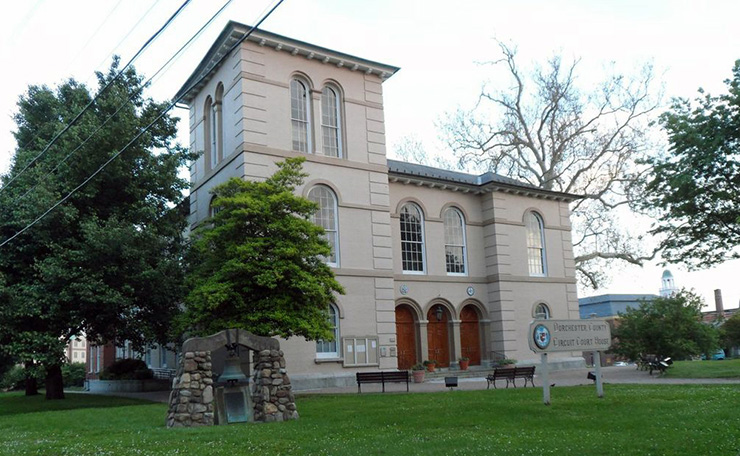 Leaving town and returning to the rural backdrop of the two-lane Highway 16 brings the traveler to the Stanley Institute. Named for Reverend Ezekiel Stanley, this tiny yellow building still stands as a testimony to the drive and power of education. Having only one room and being built upon cinder blocks the school was in use for colored children from 1867 to the 1960s.

Beyond this point on the byway, there are 35 stops leading to the Delaware border and the Mason Dixon Line. The towns of Denton and Preston house several stops not to be missed. The Linchester Mill makes for a good stopping point in providing picnic areas and rest rooms. Tours of the Mill can be arranged by appointment and free parking is found at another vista on the trail Choptank Landing. Webb Cabin the former home of James H. Webb is a rare, time-encapsulated log cabin home of a free black farmer. As a one room structure, it is a typical of housing for African-Americans of the antebellum south. A forerunner to recycling was the use of what was available or cast out, the stone foundation of Webb Cabin is the original. It was constructed from ballast disposed by ships that worked local harbors and the Chesapeake Bay. 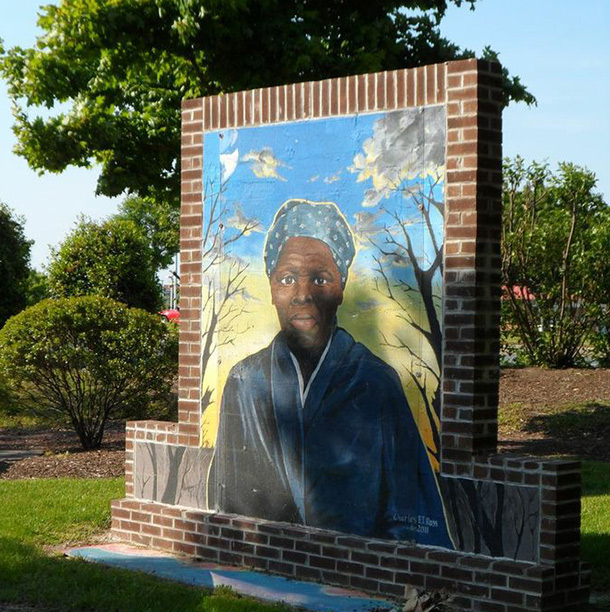 Harriet Tubman mural on the byway