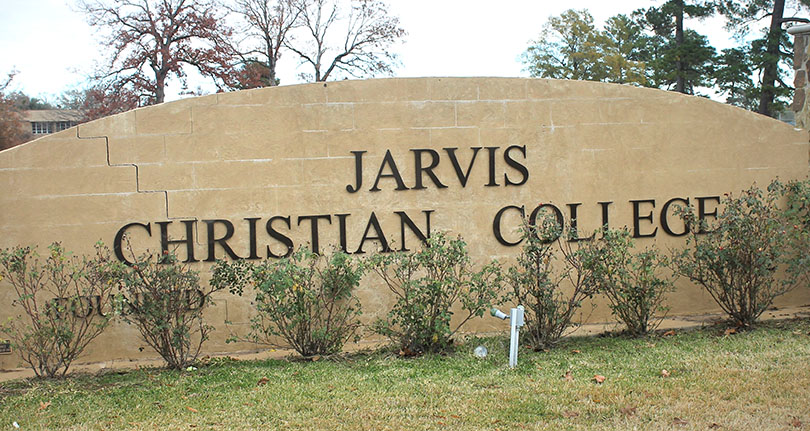 Founded in 1912, Jarvis Christian University is a historically Black College for liberal arts, a baccalaureate degree-granting institution affiliated with the Christian Church (Disciples of Christ).

Major James Jarvis and his wife Ida Van Zandt Jarvis, who had owned slaves, donated land for the school to be built. They deeded 456 acres to the Christian Women’s Board of Missions on the condition it is maintained as a school for Blacks.

Jarvis is the only HBCU that remains of the twelve founded by the Disciples of Christ Church. Its first students were educated in the remains of an old logging camp and in a cabin that became the school’s first multi-purpose building.

Historic buildings on campus include Ayer Hall, listed on the National Register of Historic Places, the oldest of the university’s buildings which have served as the college library, dormitory, classroom, and administrative office space.

Gibbs-Green Plaza, “The Plaza” for short, is named for Phillip Lafayette Gibbs and James Earl Green who was killed on May 15, 1970, when the city and state police officers opened fire on student protesters gathered in front of Alexander Hall.

Jarvis Christian University is accredited by the Southern Association of Colleges and Schools Commission on Colleges to award associate and baccalaureate degrees. It offers undergraduate majors in:

Jarvis offers a Master of Science in Criminal Justice (MSCJ) online and a Master of Business Administration (MBA)-online.

This HBCU is also known for its community service, international programs, and the Barbara Charline Jordan Honors Program.

Jarvis houses a regional collection of biological specimens in its 10,000-square-foot Frost Hall. The collections are concentrated on the herbarium and entomology collections.

The Jarvis Christian athletic teams are called the Bulldogs. The university is a member of the National Association of Intercollegiate Athletics (NAIA), primarily competing in the Red River Athletic Conference (RRAC).

There are dozens of student clubs and organizations, including student chapters of professional societies, religious associations, chapters of sororities and fraternities. Olin Library is a popular meeting place for study groups and friends.

Each student is afforded an opportunity to have international and intercultural experiences. Currently, students can choose to take either Arabic, Mandarin, or Kiswahili from a visiting Fulbright faculty. Students also have opportunities to travel abroad and learn languages and cultures from their origin.

It is located on a rural campus off U.S. 80 Highway 107 miles east of Dallas, Texas.