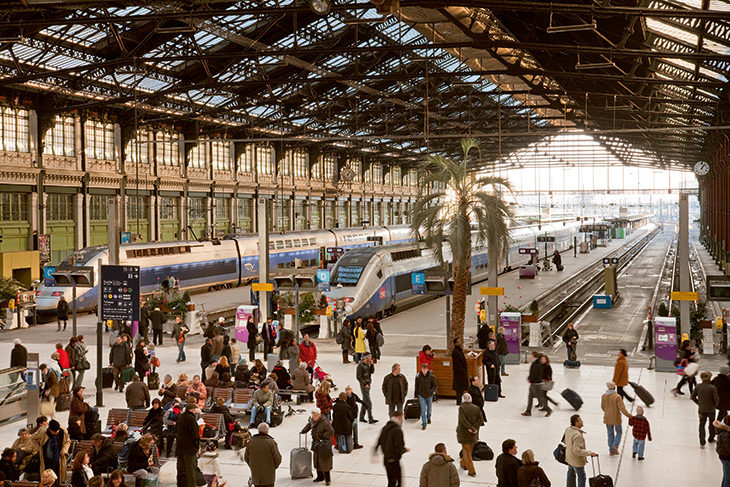 Orly International Airport (ORY) is located 8 miles south of Paris. It serves as a secondary hub for domestic and overseas territories flights of Air France and as the homebase for Transavia France and features flights to destinations in Europe, the Middle East, Africa, the Caribbean, North America and Southeast Asia. Prior to the construction of Charles de Gaulle Airport in 1974, two-terminal Orly was the main airport of Paris. Orly remains the busiest French airport for domestic traffic. ORLY AIRPORT MAP

Taxis and shuttles await you at Arrivals roadway for both airports. RER is commuter rail service is also available at both airports.

Antony Station of RER Line B is connected to Orly Airport by the Orlyval shuttle train which connects the two terminals to each other. The Orlyval takes eight minutes and costs €7.40, then a train from Antony to central Paris takes 25 minutes and costs €6.10. The trains operate every four to seven minutes.

A shuttle bus, Paris par le train, connects the airport to RER Line C at Pont de Rungis Station. The bus, which takes 10 minutes, costs €2.50 and the RER into central Paris, which takes 25 minutes, costs €3.80. Line B of the RER also interconnects with the Paris Métro. Tickets for the Métro (and local RATP buses) can be bought individually or in packs of ten (un carnet), which is cheaper. If you are staying in Paris for more than a day, think about getting a Paris Visite card, which gives you unlimited travel on most modes of transport as well as discounts at museums and other attractions.

Departing travellers can reach the fourth floor, which contains duty-free stores and border control posts, and connects, by tunnels passing under the tarmac, to satellite terminals where the boarding gates are located. Travelers arriving in these same satellites follow a path to reach the fifth floor where baggage claim and customs are located, as well as the arrival area and exit areas. The CDGVAL is a light-rail shuttle that links the terminals, railway station and parking lots.

Check the luggage policy for your airline and confirm your flight at least 72 hours in advance.
Make a copy of your passport, flight itinerary & hotel reservations and leave it with someone at home. Carry an extra passport copy with you. Men and tall women should request an exit row seat for more legroom.

Pack headache and other medicines in your hand luggage. If you have a cold or have problems with air pressure, bring noise canceling headphones or purchase special ear plugs for air pressure available at most airports or large pharmacies. To pack efficiently ladies, minimize including two outfits per day.

Don’t take the RER commuter train from the airport to central Paris if you:

A Sister’s Story: One sister rode the RER commuter train from the airport to save a few Euros. The line for RER Customer Service was too long for her patience, so she used the ticket machine at the airport Metro station, paying the worst exchange rate possible and a fee. For $40 she received 23 Euros. Her ride to Paris on a crowded RER train included views of graffiti, watching her valuables closely, dealing with her large luggage that kept falling down, and having various men who may or may not have been pickpockets, stare at her. Once she arrived at her destination RER train station, she had to transfer to a Metro subway train. The transfer included carrying her heavy luggage up several flights of stairs and down many hallways. Some hallways included homeless people and other undesirable things. Upon arrival at the Metro station for her hotel, she walked up more flights of stairs and received a “warm welcome” from the men hanging out at her station. It started to rain outside during the summer months, so you know what that means for a sister’s hair and luggage.

The train stations of Paris are a cut above normal with impressive architecture, grand open spaces and a tremendous sense of arrival.

Gare de Lyon handles about 90 million passengers each year, making it the third busiest station of France. It is the northern terminus of the Paris–Marseille railway. It is named after the city of Lyon, since most of its trains depart for Lyon and southern France. The station is located in the XIIe arrondissement, on the north bank of the river Seine. The station is served by TGV trains, regional trains and the RER. The station houses the Le Train Bleu restaurant, which has served drinks and meals to travellers and other guests since 1901 in an ornately-decorated setting.

Gare du Nord, opened in 1864, is one of the six large stations of the SNCF mainline network for Paris. Gare du Nord offers connections with Eurostar, Paris Métro, RER, shuttle buses and tourbuses. It is the busiest railway station in Europe and busiest in the world outside Japan. This station is famous for majestic statues crowning the building along the cornice line. They illustrate destinations outside France, with the ninth figure of Paris in the center. Fourteen more modest statues representing northern French cities are lower on the façade. With over 700,000 passengers daily, most passengers are commuters traveling from the northern suburbs of Paris. There are often traffic jams in front of the station. Gare du Nord was seen in films The Bourne Identity, The Bourne Ultimatum and Ocean’s Twelve. Gare du Nord website

The Metro system is a preferred way to travel without luggage between Parisian districts during day time. It has 14 Metro lines and 3 Tram lines (light rail) that blanket Paris. Most lines cross the city diametrically. A single Metro ticket costs under €2, and can be used for one journey, including all connections. White-coloured tickets can be purchased singly or in a book of 10 (“carnet”), at the ticket offices or machines in Metro stations, and also in some tobacconists. Keep hold of your ticket until you have completed your journey, as you may be asked to show it, if tickets are requested by the ticket inspectors, else you risk paying a fine.

This ticket, valid for zones 1 and 2, allows you to travel anywhere in Paris, and even beyond, since it will take you to the end of each Metro line, even if it is located in zone 3 (as for example La Défense on line 1).

The Metro and Tramway, most of the Bus and a few sections of the RER are run by the RATP (Régie Autonome des Transports Parisiens). The RER, a regional commuter rail system, is run by the SNCF (Société Nationale des Chemins de Fer Français), state-owned train company whose rail network covers all of France. Purchase Metro, RER and Bus tickets.

In the RER, as long as you remain within Paris city limits, tickets and prices are identical to the Metro. That is a great convenience and savings to travelers. RER stations also have ticket offices and machines. The RER ticket also covers your journey and connections within Paris Zones 1 and 2. PARIS METRO SYSTEM MAP

Read Metro & RER map and tour books in your hotel room. To minimize targeting by pickpockets as an vulnerable tourist, avoid reading maps or tour books on Metro or RER trains. Before landing in Paris, write a few Metro directions on a small sheet of paper easily concealed in your hand or written in the palm of your hand. Street musicians are common on the trains. Do NOT pull out your wallet to give them money. Don’t flash fancy jewelry or fancy watches. Memorize saying the name of your station in French — its not hard.

Get a Paris Metro unlimited rides card for the trains, buses and Montmartre funicular for a specific number of days. Alternatively, buy a collection of 10 tickets, so that you don’t waste time in line to purchase individual tickets later. Pay close attention to signs that state “Renove” (renovation), as some stations in the large Metro and RER systems are always under renovation.

To open Metro train doors, pull the handle since they do not open automatically at stops. Before exiting a Metro station, look at the wall-mounted Metro map and figure out exactly where you are going. Use the Sortie (exit) nearest your destination. When confused or if you need assistance, ONLY ask for help from station agents or the information booth.

Use local buses if you have extra time and know where you are going. It’s easy to go the wrong direction on the bus.

Though you often see motorcycles, do NOT rent one to explore Paris. It is dangerous for a first-time visitor to use one and motorcycle accidents are common.

The double-decker “Hop on, Hop off” tour bus is worth the extra money compared to the Metro if you want to see the major tourist attractions conveniently. The open-air seats on the top of the bus provide the best views.

As an African-American-owned business, Discover Paris!® takes pride in extending its services to you, the African American traveler. They offer both self-guided personalized itineraries for the independent traveler and guided à la carte activities for groups and individuals.

Whether it is art, music, history or food that interests you, Discover Paris!® can create a superbly planned, personalized itinerary with a truly Afro-centric perspective. Your Afro-centric itinerary includes general and detailed information about sites and monuments that you wish to visit, maps, suggestions for dining and nightlife, photos to create a personalized guide book and cherished momento. More importantly, we research every step of every day of every itinerary prior to writing it – the ultimate service for the self-empowered traveler!

Arrive in Paris. We suggest that you acquaint yourself with the neighborhood around your hotel. After lunch we recommend a stroll in an historic quarter of Paris, including a street where you can experience African shopping, food, art and nightlife.

Day 2
Visit the Left Bank, where Richard Wright, James Baldwin, and other African-American writers lived. Walk past the famous Sorbonne University, down major boulevards, and through one of Paris’ most beautiful gardens. Several shopping locations for clothes, cosmetics, interior design items and more are found in the vicinity.

Day 3
Visit the neighborhood of the Eiffel Tower and stroll down the Champs Elysées. During today’s walk, you will experience all the glamour of Paris while learning of Black-owned restaurants and nightclubs, art exhibits featuring African-American works, gospel concerts and other aspects of African/Diaspora history and contemporary life in these areas.

Day 4
See the Louvre’s courtyard and the Tuileries Gardens from an Afro-centric perspective. Then walk up one of Paris’ most fashion-conscious thoroughfares, visiting designer boutiques such as Prada, Sonia Rykiel and Dior while learning about the activities of African-Americans such as Quincy Jones and designer Patrick Kelly in the area.